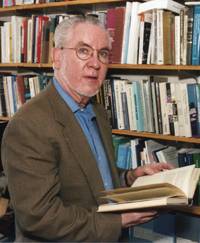 Princeton professor William Branson, who was a pioneer in the field of international economics, died Tuesday, Aug. 15, in Princeton from complications from throat cancer. He was 68.

Branson, who joined the faculty in 1967, was the John Foster Dulles Professor Emeritus in International Affairs and professor emeritus of economics and international affairs. He taught undergraduate and graduate classes in macroeconomic theory and policy, international finance and trade, and economic development. His research focused primarily on foreign exchange markets and the macroeconomic problems facing developing and transition economies.

"With Dale Henderson, he developed the 'portfolio balance' approach to exchange rate determination, an approach that emphasizes changes in the relative supplies of assets denominated in different currencies as a fundamental cause of exchange rate movements," said Gene Grossman, the Jacob Viner Professor of International Economics and director of the International Economics Section at Princeton.

"Bill was a longtime consultant to the World Bank and other international institutions, where he lent sage advice on macroeconomic policy and financial structure to many developing countries," he said. "Many students will remember him for his widely used textbook, 'Macroeconomic Theory and Policy.' Colleagues will remember his broad interests in international economics and his fine leadership of the international studies group at the National Bureau of Economic Research, a role that he capably filled for 15 years."

Branson was born on Feb. 14, 1938, in Springfield, Ill. A 1959 graduate of the U.S. Naval Academy, he served as a supply officer in the Navy for five years while pursuing graduate studies at the University of California-Berkeley, where he earned his M.A. in 1964. He received his Ph.D. from the Massachusetts Institute of Technology in 1967.

After two years on the Princeton faculty, Branson spent a year on leave as a senior staff economist with the President's Council of Economic Advisers. He began serving as a consultant to the World Bank in 1981, working on stabilization and structural adjustment programs in Indonesia, Kenya, Turkey, Yugoslavia and Portugal.

He also was a consultant with the International Monetary Fund, the U.S. Federal Reserve Board, the U.S. Treasury Department and the international Organization for Economic Cooperation and Development. He was director of research in international studies and a research associate at the National Bureau of Economic Research from 1978 to 1993. In addition he was a visiting professor at institutions in Sweden, Austria, France, Greece and Italy.

The author of numerous articles for professional journals, Branson first published "Macroeconomic Theory and Policy" in 1972. It was translated into several other languages and published in two more editions. His book "Macroeconomics" (co-written with James Litvack) was published in 1976.

Branson, who became a full professor at Princeton in 1972, was named the Jacob Viner Professor of International Economics in 1988 and to the Dulles professorship in 1992. He transferred to emeritus status in 2000.

Branson is survived by his children Kristin, William and Emily Branson, and Ekaterina Zamyshlyaeva; and by his granddaughter Morgan Branson Lynch.

A memorial service is scheduled for 1 p.m. Saturday, Sept. 16, in the University Chapel. Memorial contributions may be made to Habitat for Humanity. Questions may be sent to WHBransonMemorial@hotmail.com.