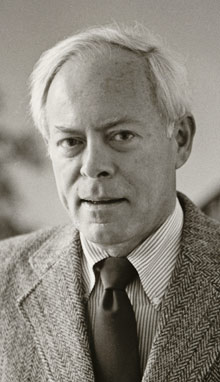 John Lewis Photo: Office of CommunicationsView or share comments on a blog intended to honor Lewis' life and legacy.

John Lewis, a development economist and former dean of Princeton University's Woodrow Wilson School of Public and International Affairs, died of natural causes on May 19 at the Stonebridge retirement community in Montgomery, N.J. He was 89. A public memorial service will be held at 2 p.m. Sunday, June 27, at Prospect House on the Princeton campus.

With the University since 1969, Lewis first served a five-year term as dean of the Wilson School and continued on the faculty as a professor of economics and international affairs until transferring to emeritus status in 1991. He was known for his work on development economics and foreign aid, a passion that shaped his academic career and his public service. He also had a fascination for India that inspired his scholarship.

"John Lewis was a fine public policy analyst, always a gentleman, courteous and friendly," said Henry Bienen, former dean of the Wilson School and the James S. McDonnell Distinguished Professor of Politics and International Affairs Emeritus. "He led the Woodrow Wilson School well and made many contributions to the study of India. I will miss him."

Lewis was a strong advocate of American aid to developing countries, believing that aid was a necessary element of foreign policy. On several occasions he took leave from the University to advise the U.S. government and international organizations on economic aid policies.

From 1979 to 1982, Lewis served as chairman of the Development Assistance Committee of the Organization for Economic Cooperation and Development in Paris. He also was a senior adviser to the Overseas Development Council international policy research institution from 1981 to 1999, as well as a member of the United Nations Committee on Development Planning from 1971 to 1983. From 1982 to 1985 he chaired a World Bank-International Monetary Fund Development Committee task force on concessional flows.

As dean of the Wilson School, Lewis instituted the joint four-year MPA/JD program, which combines the study of law and public affairs. He also made concerted efforts to support racial diversity in the school's student body. As a faculty member, he taught undergraduate courses on development economics in the economics department and graduate courses on economic development policy in the Wilson School.

Lewis' most recent books include "The World Bank: Its First Half Century," published in 1997 and written with Devesh Kapur and Richard Webb; and "India's Political Economy: Governance and Reform," published in 1995. He also is the author of "Business Conditions Analysis," "Quiet Crisis in India: Economic Development and American Policy," "Wanted in India: A Relevant Radicalism," and "World Bank in Pakistan: A Review of the Relationship 1960-84."

"I am terribly sorry to lose John Lewis," said Stanley Katz, lecturer with the rank of professor in public and international affairs. "He was a man who was not only gracious, but profoundly knowledgeable about the role of America and international affairs, and of course particularly all relations with India and India's role in the world. He was a man of great sophistication and he was one of the calmest and collected and most gentle people I ever knew. I always felt I was in touch with greatness when I dealt with him. I regret losing him very much."

Before coming to Princeton, Lewis taught as an assistant professor of economics and government at Union College from 1946 to 1950. He also served in the U.S. Navy from 1943 to 1946. In 1950 he began his long career in public service as assistant to the chairman of the Council of Economic Advisers for President Harry Truman. He returned to the classroom in 1953 as a professor of business economics and public policy at Indiana University, where he was chair of the department from 1961 to 1963.

In 1963, he was named by President John F. Kennedy to the Council of Economic Advisers. In 1964, President Lyndon B. Johnson appointed Lewis minister-director of the U.S. Agency for International Development mission to India.

"He was a great American -- classic of his generation," said Uwe Reinhardt, Princeton's James Madison Professor of Political Economy. "They studied, they fought for their country, and they came home working to make their country and the world a better place."

Lewis was preceded in death by his wife June, who died last year, and a daughter, Amanda Barnum, who died in 2008. He is survived by his daughters Betsy Alvarez and Sally Lewis-LaMonica, six grandchildren and two great-grandchildren.

In addition to the June 27 memorial, the family has arranged a private funeral and burial service. In lieu of flowers, contributions may be made in Lewis' memory to Pratham, a nongovernmental organization that works to provide quality education to the underprivileged children of India. Donations may be sent to Pratham USA, 9703 Richmond Ave., Suite 102, Houston, TX 77042.