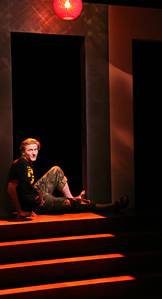 The senior thesis production "Four Rooms Waking" -- which runs Jan. 11-14 at the Matthews Acting Studio, 185 Nassau St. -- features four tales of war and liberation from around the world. The gay liberation movement is the backdrop for scenes set in New York in 1967, in which a young bartender named Carrie deals with a bizarre encounter. Above, junior Glenn Brown plays Joel, an old friend of Carrie's who appears in her imagination as she thinks back to her past. 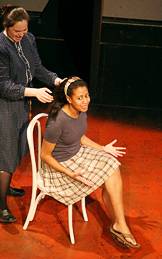 In Havana in 1975, teenager Catalina Del Mar (senior Catherine Cushenberry, seated) seeks advice from her mother's friend Libertad Martinez (senior Ronee Penoi) as she deals with her feelings for a childhood friend who has been fighting in the war for independence in Angola.

Top left: In Algiers in 1955, during the Algerian War of Independence, a young woman named Nassima (senior Annie Preis) is caught in the middle of an argument between friends.

Above left: From left standing at the table, Nassima and her friends Leila (Cushenberry) and Fatia (Penoi) are making dinner, while Leila's brother Hakim (sophomore Chris Inniss, far left) appears in her thoughts as she remembers the letters he has written to her while studying in Paris.

Bottom left: Zoe Hanscombe (freshman Katy Pinke) and Peter Odhimabo (Inniss) are Oxford-educated archaeologists studying the statue-makers and the Birdman Cult of Easter Island in the weeks after Kenyan liberation. In this scene, the ghost of the Birdman has come to Zoe in a nightmare.

Tales of war and liberation from four countries are the focus of "Four Rooms Waking," a senior thesis production presented by the Program in Theater and Dance at 8 p.m. Thursday through Sunday, Jan. 11-14, at the Matthews Acting Studio, 185 Nassau St.

"Four Rooms Waking" begins in the first year of the Algerian War of Independence. In Paris, on May Day of 1955, a Muslim student is killed when his friends choose to carry the flag of free Algeria in a parade. One day later, in Algiers, his sister impulsively saves a French soldier from a massacre. At the center of the play is the conversation between the soldier and the girl while they are trapped together in her apartment, six floors above the fighting in the streets. 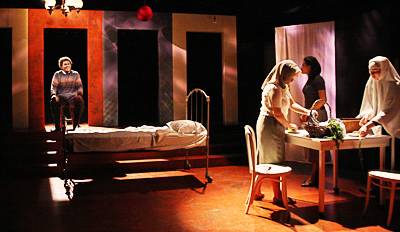 These scenes interweave with three other stories of conflict from around the world. On New Years Day of 1964, an Oxford archaeologist and her Kenyan lover, who are dealing with political tensions of the Kenyan liberation movement, make an unusual discovery while working thousands of miles away on Easter Island. In the spring of 1967, two years before the Stonewall riots in New York that spurred the gay rights movement, a young bartender has a bizarre encounter with an Antillean drag performer and the camp filmmaker Jack Smith. And on Christmas 1975, a Cuban teenager tries to reconnect with her childhood friend after he returns from the war for independence in Angola.

The production is a thesis project for seniors Julia Cain, who directed and co-wrote the play, and Annie Preis and Catherine Cushenberry, who play multiple characters. 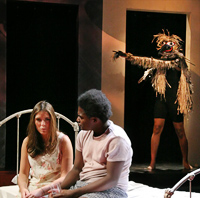 Cain said the play focuses on "quirky individuals in four different colonial situations -- drawing out both the uniqueness and the universality of four historical moments."

Cain co-wrote the play with senior Josh Williams, who is one of many non-thesis students involved in the production. Actors include senior Ronee Penoi, junior Dan Kublick, sophomores Glenn Brown and Chris Inniss, and freshmen Katy Pinke and Adam Zivkovic.

Tickets for "Four Rooms Waking" are $8 for students, faculty, staff and senior citizens, and $10 for others. They can be purchased online through University Ticketing.