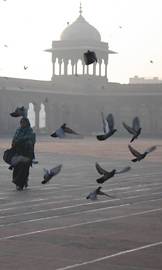 "Morning in Front of the Mosque," a photograph from New Delhi, India, by freshman Rachel Steinberg, is one of the images in a new exhibition, titled "What's Sacred? Princeton Views," on display in Murray-Dodge Hall. The exhibition includes photographs taken on campus and around the world, submitted in response to a call for images that address the question of "what is sacred?"

At left: Freshman Zachary Ruchman's photograph, "A Thousand Words," illustrates his view that handwriting "can express much more than the plain, typed word ever will."

"Cryogenesis," by freshman Dean Shaban, received special commendation from the exhibition's curators. The image of a plant in ice "represents the perseverance of life in the face of adversity," according to Shaban.

Below left: Graduate student Yiftah Elazar sees an "eerie sadness" in his photo of the square in front of the Jokhang Temple in the Tibetan capital of Lhasa.

A collection of photographs representing diverse interpretations of sacred imagery is on view in a new exhibition in the Murray-Dodge Hall lobby.

The exhibition, titled "What's Sacred? Princeton Views," includes 35 photographs by campus community members taken on campus and around the world. They were selected from some 160 photographs submitted in response to a call by the exhibition's organizers for images that address the question of "what is sacred?"

"The photographs chosen for display represent the full spectrum from freshmen to full professors. How often do we get that range of Princetonians involved in a single conversation about what matters to them most?" said Jeffrey Stout, a professor of religion and one of the exhibition's curators. 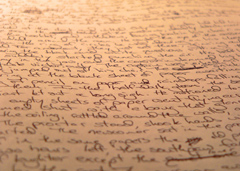 The collection includes images ranging from houses of worship to nature scenes to an intimate view of handwritten words on a page, titled "A Thousand Words," by freshman Zachary Ruchman.

Ruchman, whose photo received special commendation by the curators, explained his inspiration. "I had written a short story and left the papers lying on my desk when I stood up. I really like handwriting because I think it can express much more than the plain, typed word ever will," he noted. "When I sat back down, I noticed the way the light was coloring the paper. The light, combined with the handwriting, piqued my interest, so I attempted to visually explore the draft in a way that complemented the story."

Yiftah Elazar, a graduate student in politics, submitted a photograph he took five years ago while visiting the Tibetan capital of Lhasa, where he was "struck by the quiet resolve of the Tibetans to maintain their heritage." Elazar's photo captures the square in front of the Jokhang Temple.

"For me, the answer to the question 'what's sacred?' has always been simple: Nothing is sacred, because sacredness implies a religious veneration that isn't a part of my moral or psychological makeup. But visiting Lhasa has helped me not only to see what the sacred might mean for other people, but also to identify with their devotion," Elazar said. "I think that the image conveys my sentiments: It was taken with my back to the Jokhang Temple, looking at the people going about their business, and yet, because of the lighting, it speaks of something extraordinary. At the same time, the sun is setting on the Jokhang Temple square, and when I look at the picture, I feel an eerie sadness setting in." 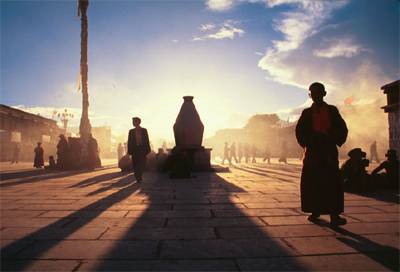 The exhibition was conceived by Paul Raushenbush, associate dean of religious life, who also served as a curator. In addition to Raushenbush and Stout, the curators were senior Ben Amster, executive editor for photography at The Daily Princetonian; Eve Aschheim, director of the Program in Visual Arts; Janet Dickerson, vice president for campus life; and Thomas Dunne, associate dean of undergraduate students. The exhibition is sponsored by the Office of Religious Life, the Office of the Dean of Undergraduate Students, the Office of the Vice President for Campus Life, the Program in Visual Arts and The Daily Princetonian.

The exhibition will run through the end of the spring semester. The Murray-Dodge Hall lobby is open daily from 8 a.m. to 10 p.m.