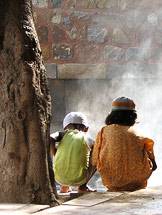 This photograph, titled "Tomb of the Famous Poet Mirza Ghalib in Delhi, India," by Princeton junior Waqas Jawaid is one of 34 images on view in the Murray-Dodge Hall lobby. It is part of an exhibition of photographs taken around the world by Princeton community members showcasing diverse viewpoints on the question of "What Is Peace?"

An exhibition of photographs taken around the world by Princeton community members -- showcasing diverse viewpoints on the question of "What Is Peace?" -- is on view in the Murray-Dodge Hall lobby.

The exhibition includes 34 images selected from some 160 submissions by Princeton students, faculty and staff. It is sponsored by the offices of religious life, the dean of undergraduate students and the vice president for campus life as well as the Lewis Center for the Arts and The Daily Princetonian.

"We tried to pick a theme that will reflect a goal and mission of the Office of Religious Life, which is to investigate, promote and educate around questions of peace," said Paul Raushenbush, associate dean of religious life and one of the exhibition's curators. "We also were interested to see how various individuals would respond to this, either through personal and more private understandings of peace and also social and political understandings of peace. We thought it was an interesting way of getting into the multilayered aspect of what peace is."

Graduate student Tiffany Tong submitted the image at left titled "The Scenic Route." It shows a kayaker paddling on Lake Bled in Slovenia, past the Pilgrimage Church of the Assumption of Mary. At right, sophomore Michael Collins took this picture of one of the orphans he was tutoring in Dar es Salaam, Tanzania. Titled "Mtoto," which means "child" in Swahili, the photograph earned Collins a special commendation in the exhibition.

The exhibition features images of families, friends, landscapes, horizons and other subjects from around the United States and countries including Egypt, India, Iran, Israel, Jordan, Slovenia and Tanzania. Raushenbush said the curators' aim was to look not "just for feel-good images," but to select "interesting, well-crafted, well-composed photographs" that raise questions about the subject of peace.

"What Is Peace?" follows two previous yearlong exhibitions of photographs by Princeton community members who were asked to submit images addressing the questions of "What's Sacred?" and "What Is Family?"

"What Is Peace?" will be on view in Murray-Dodge Hall through Dec. 1 and also can be viewed online. 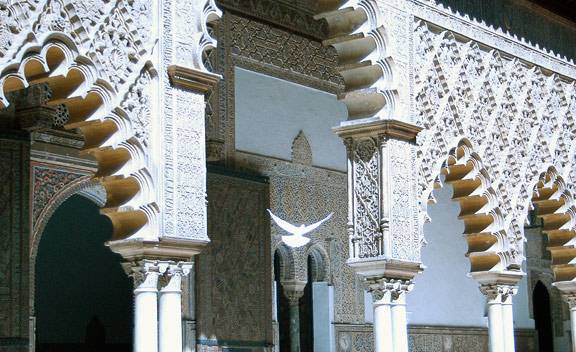 Senior Andrew Watrous caught this moment as a dove flew up and landed on an arch at the Alhambra near Granada, Spain. "Dove of the Alhambra" also won a special commendation in the exhibition.