Seniors and their supporters recognized at Class Day 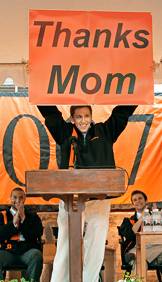 During his Class Day remarks on June 4, Senior Class President Jim Williamson told his classmates to recognize the people who had helped them reach their goals -- and proceeded to very visibly thank his own mom. The event on Cannon Green is held the day before Commencement as a celebration of Princeton seniors' achievements and features student speeches and the presentation of awards for community service, athletics and leadership. Williamson was presented with the W. Sanderson Detwiler 1903 Prize for his service to the class.

Top left: Parents, wearing orange plastic ponchos to protect against a light rain, snapped pictures of their daughters and sons. 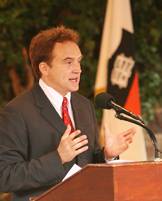 Emmy Award-winning actor Bradley Whitford, best known for his role on NBC's "The West Wing," discussed how politics has been tainted by show business in his address. He encouraged the members of the class of 2007 to get involved in world affairs because "we need you." 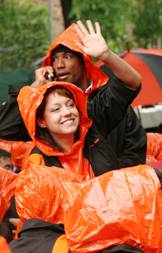 Students and families connected across the green by cell phone and waving during the ceremony. Above left: Scott Wolman was selected by his classmates to give a lighthearted address about their years at Princeton.

The class of 2007 named five people as honorary class members, including Charlie Wilder, a manager at the University's Rockefeller and Mathey dining halls (right), who hammed it up with Class Day co-chair Chris Chaney. Others were the Class Day speaker Whitford; Maitland Jones, the David B. Jones Professor of Chemistry; Murray Peyton, a 1957 alumnus; and Fred Hargadon, who retired as the University's dean of admission in 2003 after this class was admitted. Above left: Humorous addresses by their classmates kept students in smiles throughout the event. 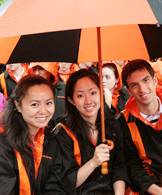 An umbrella provided a colorful cover for this group of friends. At left: Seniors and their families gathered on Cannon Green behind Nassau Hall for the event. Photos: Denise Applewhite and John Jameson 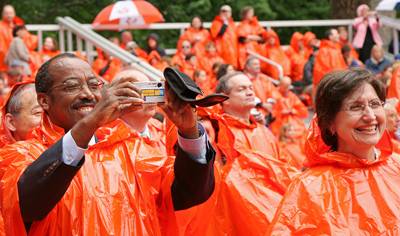 Members of the class of 2007 bid parents and teachers a fond thank you on Monday, June 4, marking their last days at Princeton with a lively Class Day ceremony that recognized students' accomplishments and saluted those who had helped the members of the class reach their goals.

The graduating seniors also thanked their Class Day speaker, actor Bradley Whitford, by making him an honorary member of the class of 2007.

Students and other audience members donned orange plastic ponchos as they gathered in a light rain on Cannon Green to commemorate the milestones achieved in the last four years. "Sit back, get comfortable and get a little nostalgic, and together we will celebrate," said senior P.G. Sittenfeld, one of the class day chairs.

As he reflected on his college days, senior class president Jim Williamson told the audience, "Princeton isn't just about conquering our fears and finding new things. It's about the act of searching for them."

He also recognized the people who had helped the members of the class of 2007 reach this day. "Right after Class Day, go up to your parents, call your favorite high school teacher, find your favorite professor and let them know how much they meant to you," he said. He took care of his thanks from the podium, holding up a large sign that read, "Thanks Mom."

Others reminisced about some of the highlights of the last four years, which included getting to know the Tulane University students who were welcomed to Princeton after Hurricane Katrina, meeting members of their grandfather class, the class of 1957, and celebrating the football team's victories over Harvard and Yale with a bonfire on Cannon Green.

"We have all managed to absorb and contribute to what makes Princeton University the best old place of all," said senior class officer Jennifer Mickel. "We will cherish (our years at Princeton) during our subsequent journeys in life, and our memories will always keep us coming back to Nassau." 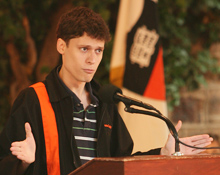 Scott Wolman, who was chosen by the class to give a lighthearted address, attempted to answer the question, "What's next?" "Sure, the world beyond FitzRandolph Gate is nothing like Princeton, and that’s a little terrifying. But it’s also a relief, because it means that our short time here will seem that much more special, that much more enduring. What’s next? Who cares? Bring it on, real world."

President Shirley M. Tilghman saluted Whitford, best known for his role as Deputy White House Chief of Staff Josh Lyman on NBC’s "The West Wing," with a tongue-in-cheek confession: "I learned everything about running Nassau Hall from watching 'The West Wing.'" 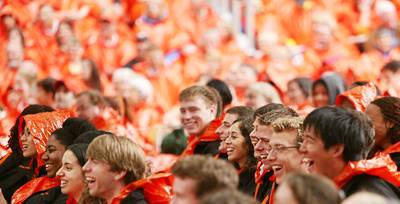 Whitford discussed how politics has been tainted by show business.

"In presidential politics there is nothing more important than being good on television," he said. "In the age of television, viability and style are substance. ... I spend my life trying not to be bad on television. I would hope the leaders of the world would be held to a higher standard than a television actor."

He encouraged the members of the class of 2007 to get involved in world affairs. "We need you. We need your bright Princeton minds to illuminate (the future). ... We need your active participation to make it happen."

Princeton's graduation activities culminate Tuesday, June 5, with Commencement ceremonies at 11 a.m. on the lawn in front of Nassau Hall. 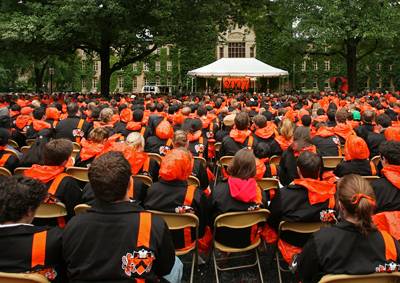