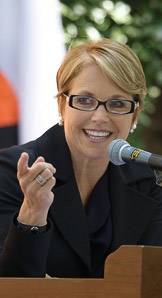 "CBS Evening News" anchor and managing editor Katie Couric served as keynote speaker for the Class Day ceremony Monday, June 1, on Cannon Green. "When Princeton called to invite me I was thrilled," she said. "It also gave me a perfect excuse for turning down Harvard and Yale -- my safety schools!" The graduating seniors saluted Couric by making her an honorary member of the class. (Photo: Brian Wilson) 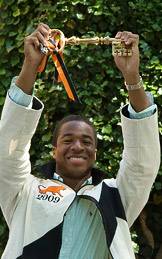 Senior Benjamin Tagoe shows off the symbolic "key to the campus" presented to him by President Shirley M. Tilghman. (Photo: Denise Applewhite) 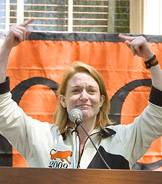 Senior Jackie Bello focused her remarks on some of her favorite memories of Princeton, which ranged from the the 2006 bonfire and Bent Spoon cupcakes to academic trips to Greece and Spain. (Photo: Denise Applewhite) 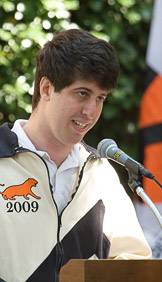 Senior Jason Gilbert, who delivered the second student address, complained about the grade of the toilet paper on campus, but also reminisced about the good friends he made at Princeton. (Photo: Brian Wilson)

On the sun-dappled Cannon Green behind Nassau Hall, the members of Princeton's class of 2009 gathered to recognize their accomplishments and share some laughs at Princeton's Class Day ceremony Monday, June 1.

"Class Day is a day to celebrate the bonds of friendship and shared experience that you have forged in the past four years," President Shirley M. Tilghman told the soon-to-be graduates.

The student speakers had their classmates clapping and laughing. Senior Jason Gilbert, who delivered one of the addresses, spent some time complaining about the grade of the toilet paper. In the other student address, senior Jackie Bello listed her fond -- and not-so-fond -- memories that included all-nighters, Frist Campus Center salads, the 2006 bonfire and Bent Spoon cupcakes.

Humorous addresses kept the students in smiles throughout the event. (Photo: Denise Applewhite)

But both also reminisced about the many facets of their lives at Princeton, agreeing that most of all, they cherished the people they had gotten to know.

"You probably do not have to turn your head very far to see the face of someone you met here at Princeton, from a place you didn’t even know existed, who has changed your life for the better in a way that cannot even begin to be described by words," Gilbert said.

Senior Class President Grant Bermann talked about the great accomplishments of his classmates, and threw in a little self-deprecating humor, admitting he hadn't yet found a date through an online service. Much to the amusement of President Shirley M. Tilghman and Katie Couric, he asked Tilghman if she might be interested. He also was one of the students receiving awards at Class Day. Bermann, who was class president for all four of his undergraduate years, was presented with the W. Sanderson Detwiler 1903 Prize for his work on behalf of his class. (Photos: Brian Wilson [Bermann] and Denise Applewhite [Tilghman and Couric])

"The years we spent at Princeton were our wonder years," said Bello, a religion major who also reflected on where her Princeton education had taken her -- to Athens to study ancient Greek theater and to Spain for a 500-mile pilgrimage that served as research for her senior thesis. "This trip may be over, but the real journey has just begun," she concluded.

Grant Bermann, the senior class president, shared with the audience of parents, faculty members and well-wishers a few of the accomplishments of his classmates: a Forbes College student who founded an organic garden that provides food to the dining halls and an athlete who tutored elementary school students in Trenton. 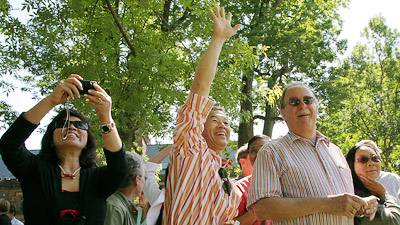 Family members sought out their loved ones. (Photo: Denise Applewhite)

"You don't have to look far to see people who have accomplished great things," Bermann said. "This tireless service is so common at Princeton that it often goes unacknowledged. But we should pause today and remember that what is ordinary at Princeton is in fact extraordinary."

Couric began her talk by telling the crowd how honored she was to be asked to speak.

"When Princeton called to invite me I was thrilled," she said. "It also gave me a perfect excuse for turning down Harvard and Yale -- my safety schools! And since I’ve been called a cougar lately … I’m very happy to be an honorary tiger instead!"

In addition to Couric, honorary class members included Claretta Carter (right), a retail food service worker in University Dining Services. Carter, who works at the convenience store in the Frist Campus Center, was recognized by senior Erin Mesdag for the warm way in which she greets students. (Photo: Denise Applewhite)

She then launched into a humorous string of Princeton expressions and student slang that ended with her enjoying a "Fat Lady" at Hoagie Haven and polishing it off "with a donut from the WA (that would be the Wawa). Boy, you Princetonians really know how to live," she quipped.

Changing tones, she told students that the economic climate they are facing also presents them with opportunities.

"Maybe the silver lining of these tough economic times is that it’s a wake-up call that can help us recalibrate our values," she said. "Take some chances. Get out of your comfort zone, even if that's extremely uncomfortable. Make some noise. Be a rabble-rouser." 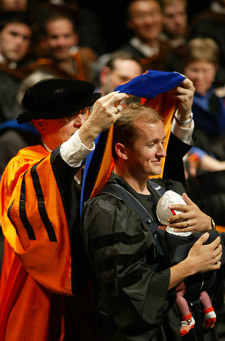 DeForest McDuff holds his new child as he receives the hood for his Ph.D. in economics from Chief Marshal Douglas Clark during the Graduate School's Hooding ceremony Monday, June 1. His wife, Susan Robison McDuff, also received a hood for her Ph.D. in psychology. (Photo: Frank Wojciechowski)

Recalling her own career starting as a desk assistant at ABC News in Washington, D.C., Couric emphasized the importance of persistence. "Success only knocks on your door if you win the Publishers Clearing House sweepstakes. All the rest of us have to work for it and work hard," she said. When Couric got her first big break in 1980 -- reporting for CNN -- the feedback was not encouraging. "The president of CNN said he never wanted to see me on the air again," Couric recalled. "This could have been demoralizing. Instead, I found it motivating."

Couric went on to co-anchor NBC News' "Today" show for 15 years before joining CBS News in 2006 as the first female solo anchor of a weekday network evening news broadcast. After losing her husband, Jay Monahan, to colon cancer in 1998, Couric became a champion of cancer awareness. She was the first woman and the first journalist to deliver the Class Day address since Princeton began inviting speakers from outside the University community in 2001.

Concluding her remarks, Couric asked the students to "thank your parents or whoever helped you achieve this goal, then transform that gratitude into action and give back to a world that has already given you so much." She added, "Sail away, even if the waters are choppy and the territory uncharted. You'll be amazed at what you learn about the world and about yourself."

On Monday evening, advanced degree candidates participated in the Hooding ceremony at McCarter Theatre. Hoods distinguish the wearer by both rank and academic discipline. Masters' hoods generally are shorter by a foot than doctors', and each hood is bordered by a velvet band in the color assigned to the discipline in which the degree is granted. The Hooding ceremony was webcast live and will be available for later viewing.

Princeton's graduation activities culminate Tuesday, June 2, with Commencement ceremonies at 11 a.m. on the lawn in front of Nassau Hall. 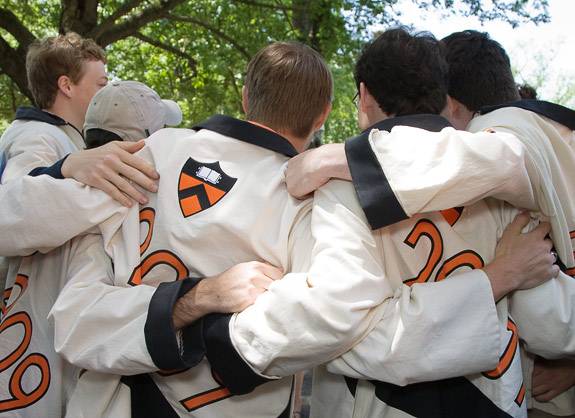 Following the ceremony, a group paused for some togetherness. (Photo: Denise Applewhite)