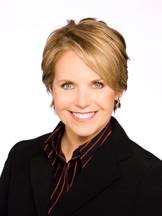 Leaders of the senior class selected Couric from among numerous nominees suggested by classmates. In an e-mail to seniors, the class of 2009 officers wrote, "As a journalist, she has covered a wide range of world events, from record-setting Olympic performances to historic presidential elections. And as a pioneering woman in an often male-dominated profession, she has broken barriers of her own. For these reasons alone, she would have made an outstanding Class Day speaker."

Going on to cite as one example Couric's championing the cause of cancer awareness, the officers added, "She serves as a model for us as we seek to incorporate service into our post-Princeton lives, and she will undoubtedly leave us with words to remember long after we graduate."

They pointed out that Couric will be the first woman and the first journalist to deliver the Class Day address since Princeton began inviting speakers from outside the University community in 2001.

Couric has covered most of the major breaking news events over the past 18 years. She has interviewed a diverse collection of newsmakers, from presidents and prime ministers to industry leaders and cultural icons.

Couric joined CBS in 2006, becoming the first female solo anchor of a weekday network evening news broadcast. In 2008, the Radio-Television News Directors Association honored the "CBS Evening News" with a prestigious Edward R. Murrow Award for "best newscast." Couric also serves as a correspondent for "60 Minutes" and as an anchor for CBS News primetime specials. Previously, she was a co-anchor of NBC News' "Today" show for 15 years.

After losing her husband, Jay Monahan, to colon cancer in 1998, Couric embraced the fight against the country's No. 2 cancer killer. In March 2000, she launched the National Colorectal Cancer Research Alliance, in association with the Entertainment Industry Foundation and Lilly Tartikoff, to fund new medical research in colorectal cancer and to conduct educational programs encouraging the prevention and early detection of the disease through proper screening. On Sept. 5, 2008, Couric, Charles Gibson of ABC and Brian Williams of NBC collaborated on a one-hour primetime program, "Stand Up To Cancer," an unprecedented tri-network effort.

Class Day, which takes place the day before Princeton's Commencement, is being organized by members of the graduating class including chairs Mike Monagle, Davion Chism and Lily Cowles. In addition to Couric's address, the ceremony will include student remarks, the induction of honorary class members and other special recognitions.

The Class Day ceremony is scheduled to be held on Cannon Green, weather permitting, at 10:30 a.m. It is a ticketed event for seniors and their invited guests only.