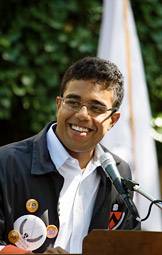 Seniors gather for Class Day festivities, including addresses by student speakers. Graduation, said class president Aditya Panda, "represents the start of a new journey and not the end of our time at Princeton." 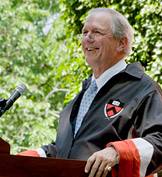 Charles Gibson, an award-winning journalist who spent 35 years as a reporter and anchor at ABC News, delivers his Class Day address. He told students, "There are ethical imperatives in this life -- compassion, honesty, fairness, trustworthiness, a respect for others." (Photo: Denise Applewhite) 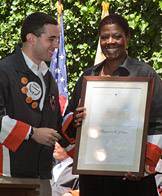 Jonathan Nussbaum (left), secretary of the class of 2010, inducts Marjorie Young, director of Community House, as an honorary member of the class. (Photo: Denise Applewhite) 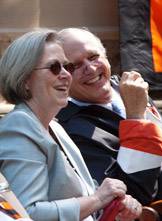 President Shirley M. Tilghman and television journalist Charles Gibson, who was the Class Day speaker, share in the laughter at the ceremony. (Photo: Denise Applewhite) 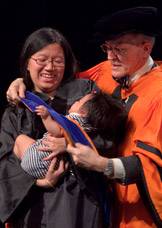 Receiving the hood for her doctoral degree becomes a family affair for this graduate student. She was among the advanced-degree candidates who participated in the Hooding ceremony May 31 at McCarter Theatre. (Photo: Brian Wilson)

Members of the class of 2010 assembled on Princeton's sun-drenched Cannon Green to recognize students' accomplishments and share laughs at the Class Day ceremony Monday, May 31.

The graduating seniors also celebrated their Class Day speaker, television journalist and Princeton alumnus Charles Gibson, by making him an honorary member of the class of 2010. 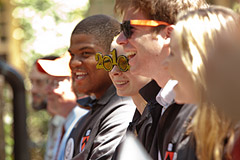 Graduation, said class president Aditya Panda, "represents the start of a new journey and not the end of our time at Princeton."

Lauding the University for the value it places on friendship and community, Panda joked that when he forgot to wear a shirt to class on a cold February day, "people I barely knew were willing to donate their shirts." His fellow students, he went on, have inspired him. "I would not have dreamt so big today had I not met some of the people sitting out here in front of me, people who've taught me the heights I can aspire to, given conviction and drive," Panda said.

Panda joined other student speakers in thanking friends, family, faculty members, administrators and staff for their support and guidance. 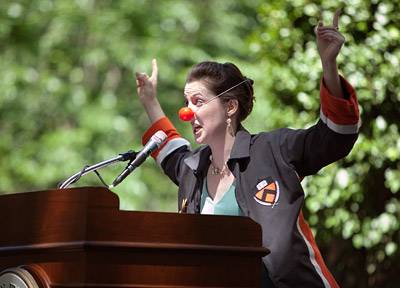 Senior Becca Foresman, delivering one of the student addresses, describes her study of clowning at a French school last summer. "Carpe ridiculum!" she shouted at the conclusion of her speech as she donned a clown nose. (Photo: Denise Applewhite)

Becca Foresman, who delivered one of the student addresses, recounted that last summer, Princeton provided funding for her to study clowning at a French school. She recreated one of her assignments for the audience: impersonating a washing machine. Her instructor, she said, was not complimentary. But failure unlocked her potential, Foresman said. 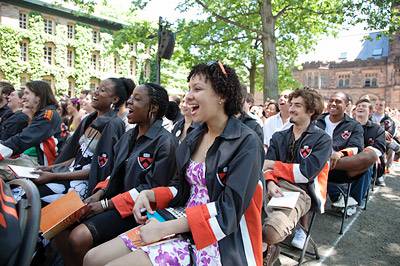 "Failure reveals us to ourselves," making it as valuable as success, she said. At Princeton, Foresman continued, "we have allowed each other to risk, stumble, break, pick ourselves up and not be perfect. I look out at you, and I see people who were gentle enough to make a place for my failures when I could not." 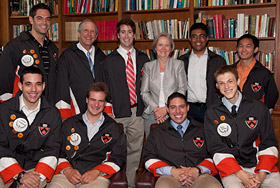 Another student speaker, Zach Zimmerman, told his fellow class members that, "in the words of Sister Sledge's 1979 R&B pop hit: 'We Are Family.'"

He went on, "My entire body, mind and soul -- if there is one -- are in the deepest dept to all of you, the people who have helped me realize who I am, and have welcomed me with open arms into the most loving family in the world." 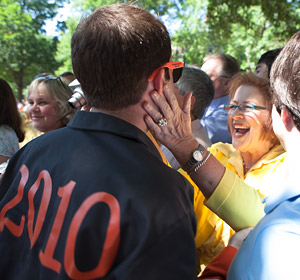 Family members greet a soon-to-be graduate during the class procession into the ceremony. (Photo: Brian Wilson)

Gibson, an award-winning journalist who spent 35 years as a reporter and anchor at ABC News, began his talk by offering his top 10 list of rejection letters from people he said were asked to speak at Class Day. The list included actress Lindsay Lohan, former Alaska governor Sarah Palin, television host Oprah Winfrey and actor Will Ferrell, who starred in a film about a bumbling newscaster and, according to Gibson, wrote, "I'm too busy being a real anchorman. Get a fake one like Gibson."

Gibson, a 1965 graduate, told the seniors, "These past four years have been a critical juncture in your life. For it is unlikely ever again that you'll have four years to think -- not just to learn, not just to research, but to think. And I hope you've spent time thinking about, 'What do I want to be?' Not in terms of a career, but as a human being." 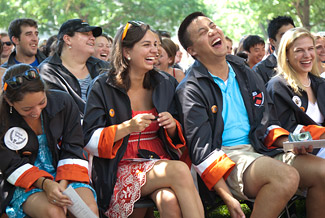 One of the several light-hearted addresses keeps the students in smiles during the event. (Photo: Denise Applewhite)

In an address that was at times humorous, but mostly earnest, Gibson continued, "It is old-fashioned, but I will tell you there are ethical imperatives in this life -- compassion, honesty, fairness, trustworthiness, a respect for others. … If you don't possess these basic qualities, no one will know it better than you do yourself. And if you don't admire yourself as a person, frankly, in the long run, you won't matter."

Discussing his profession, Gibson urged the students to "read the front page first. Watch the evening news. Don't watch the entertainment news." And he implored them to "look for objectivity. It is less and less in fashion these days, and it's not easy to achieve. But don't just listen to media voices that reflect your point of view. Open yourself to the views of others."

On Monday evening, advanced-degree candidates participated in the Hooding ceremony at McCarter Theatre. Hoods distinguish the wearer by both rank and academic discipline. Masters' hoods generally are shorter by a foot than doctors', and each hood is bordered by a velvet band in the color assigned to the discipline in which the degree is granted.

President Shirley M. Tilghman told the soon-to-be graduates, "These vibrant hoods are only the outward mark of the degrees you have earned. The true measure of your achievement can be found in the knowledge you have generated and acquired in your time here; in the papers, reports, theses and dissertations that have filled your waking hours -- and even, I suspect, your dreams."

She went on to urge them to bring what they have learned not just to academic settings, but to op-ed pages in newspapers, public lectures and work with governments and civil society organizations, among others. "One important characteristic of a well-educated mind is the ability to explain what you do, and why it matters, to others," she said.

The Hooding ceremony was webcast live and will be available for later viewing.

Princeton's graduation activities culminate Tuesday, June 1, with Commencement ceremonies at 11 a.m. on the lawn in front of Nassau Hall. 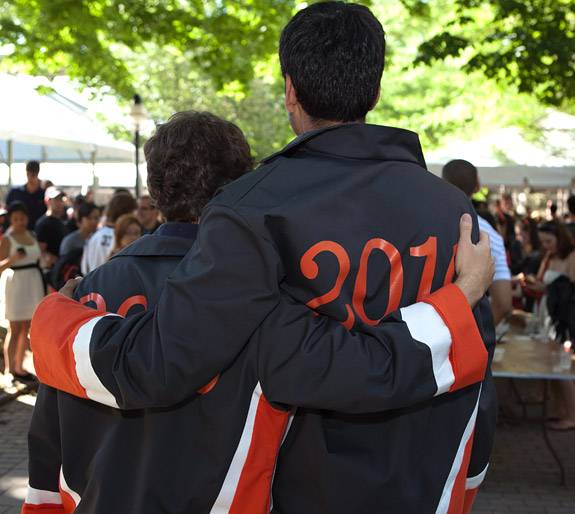 Before the ceremony, a couple of friends show camaraderie to remember the moment. (Photo: Brian Wilson)