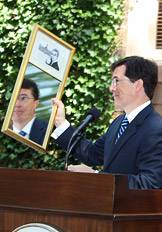 During June 2 Class Day festivities, Princeton's class of 2008 presented keynote speaker Stephen Colbert, the host of Comedy Central's "The Colbert Report," with "The Understandable Vanity Award." The trophy consisted of a drawing of the comedian giving the thumbs-up sign in front of Nassau Hall -- and a mirror. "I've never seen anything more beautiful," Colbert raved as he gazed at his image. (Photo: Brian Wilson) 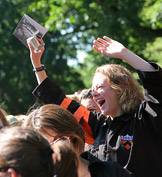 One senior reached high to connect with her family in the seats. (Photo: John Jameson)

Senior Mark Bur, who gave one of the student addresses at Class Day, summed up the last four years by telling the members of his class: "We did it. We went to Princeton." (Photo: Brian Wilson)

Bathed in sunshine and dressed in their new class jackets, members of the class of 2008 saluted their accomplishments and enjoyed many moments of laughter on Monday, June 2, at Princeton's Class Day ceremony.

Humorous addresses kept the audience in smiles throughout the event. (Photo: John Jameson)

The soon-to-be graduates and the friends and family who joined them on Cannon Green also delighted in the remarks of Stephen Colbert, the host of Comedy Central's "The Colbert Report," who delivered the keynote address.

President Shirley M. Tilghman told the seniors, "Today you have gathered to affirm the ties of friendship and shared experience that unite you as a class." 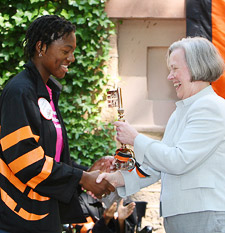 Senior class president Tom Haine said standing on Cannon Green made him reflect on the University's centuries of history and the prominence of its legacy. "We have been living in the shadows of giants here at Princeton," he said. "Great heroes of the past, right on this ground, fought, walked, prayed, learned and peered out on a troubled world in need of a few good men and women."

He listed some of the famous graduates of Princeton, saying, "History echoes with their exploits and is prepared to record ours, may we be worthy of such attentions and to stand in such company. Some people say college is the best time of your life, and I disagree respectfully. It may well have been the best so far, but with the intellectual foundation we have made and, more importantly, the character and the friendships we have forged here at Princeton, the vista of our future looks even more lush than this idyllic scene."

Senior Chelsea Carter looked back on the last four years with nostalgia. "I will miss this old place more than I can possibly imagine," she said in one of the student addresses. "Princeton is a tightrope walk to be sure, a fantastical balancing act and feat of Spartan endurance that alternately leaves us at spectacular highs and devastating lows. But we rise to the occasion, and we have all met this challenge with a grace and a skill that makes me so proud to call myself a member of the class of 2008."

Colbert told the audience that he had come to Princeton to tell the class that, if they followed their dreams and applied what they had learned at the University, they had the power to change the world. But, he implored, "Please don't do that." 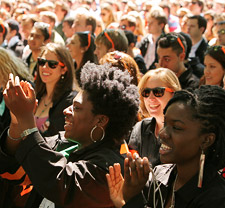 Many students sported black and orange sunglasses provided to them at the beginning of the event. (Photo: John Jameson)

Speaking "on behalf of the adults," he said, "I am begging you to leave the world alone. ... Some of us like it the way it is. Personally, things are going great for me right now." The Emmy Award-winning actor and writer deplored the effect the class members could have, saying "you people are like a virus that will soon be unleashed upon the world, with your unstoppable drive and your infectious enthusiasm."

Colbert blamed this fervor for changing the world on leaders such as Mohandas Gandhi and Al Gore. "Please don't try to change global warming," he said. "The older generations cut down the forest and sprayed millions of tons of CO2 in the air for a reason -- because they felt a draft in here. ... When you're older, you'll understand that it is a lot easier to raise the ocean temperatures a few degrees than to remember to bring a cardigan."

Finally, he said that he thought changing the world would be a rather difficult task. "Wouldn't it be easier to take up your remote control and follow me?" 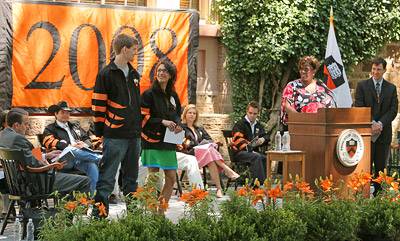 Several awards were presented to students during the ceremony, including the Priscilla Glickman '92 Memorial Prize for "independence and imagination in the area of service" to, from left, Joshua Loehrer and Jessica Gheiler by Marjorie Young, director of Community House, and David Brown, director of the Student Volunteers Council. (Photo: John Jameson)

Awards for community service, athletics and leadership were presented to the seniors. The class awarded Colbert "The Understandable Vanity Award," which consisted of a drawing of the comedian giving the thumbs-up sign in front of Nassau Hall -- and a mirror. "I've never seen anything more beautiful," Colbert raved as he gazed at his image.

Colbert was accompanied to campus by Jay Katsir, a member of the class of 2004 and a writer for "The Colbert Report." When Katsir spoke at the Class Day ceremony four years ago, one of those in the audience was Colbert's agent, who later suggested that Katsir be hired as a writer for Colbert's show.

On Monday evening, advanced degree candidates participated in the hooding ceremony at McCarter Theatre. Hoods distinguish the wearer by both rank and academic discipline. Masters' hoods generally are shorter by a foot than doctors', and each hood is bordered by a velvet band in the color assigned to the discipline in which the degree is granted.

Princeton's graduation activities culminate Tuesday, June 3, with Commencement ceremonies at 11 a.m. on the lawn in front of Nassau Hall. 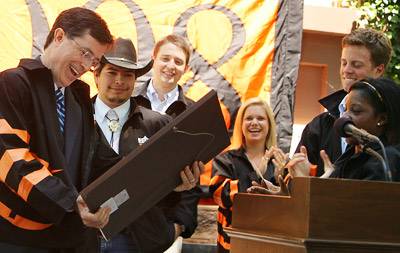 Following his address, Stephen Colbert was made an honorary member of the class of 2008 and received a plaque and class jacket. (Photo: Brian Wilson)