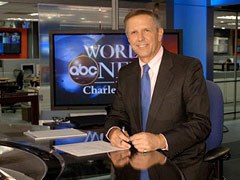 Gibson was anchor of ABC's "World News" from 2006 to 2009, and has been a member of Princeton's Board of Trustees since 2006. Leaders of the senior class selected Gibson, who was a history major at Princeton, from among numerous nominees suggested by classmates.

"Mr. Gibson has a claim to being one of the University's most accomplished alumni, with a career that finds its roots back to Princeton," the class of 2010 officers wrote in an e-mail to the seniors. "Mr. Gibson served as news director of the student radio station, WPRB. Since then, his career has featured an impressive rise from a local ABC affiliate in Washington, D.C., to the network's top anchor and one of the most revered figures in American television."

The e-mail to seniors also noted that Gibson's service as a University trustee during the past four years has paralleled the class of 2010's time at Princeton.

"In his role as a member of Princeton's highest governing board, Mr. Gibson has helped drive many of the substantial improvements in campus life and academics that our class has benefited from, including the expansion of financial aid and the implementation of the four-year [residential] college system."

With more than 40 years of experience in broadcast journalism, Gibson has reported from around the country and the world, including interviews with several American presidents and world leaders such as former United Nations Secretary-General Kofi Annan, the late Palestian leader Yasir Arafat and South African leader Nelson Mandela. Gibson also has moderated several presidential debates, including the 2008 Democratic debate at the National Constitution Center in Philadelphia, which was the most-watched debate of the entire 2008 primary election cycle.

Before leading the "World News" program, Gibson was co-anchor of ABC's "Good Morning America," where he covered the Sept. 11 attacks, the space shuttle Columbia disaster in 2003 and the Oklahoma City bombing in 1995. He won an Emmy for his hour-long "Primetime Thursday" investigation titled "Columbia Final Mission."

Internationally, Gibson has reported on conflicts in the Middle East and Kosovo. In 2005, he anchored ABC's coverage of the death of Pope John Paul II and the election of Pope Benedict XVI, for which the network was recognized with an Alfred I. duPont-Columbia University Award for broadcast journalism. Gibson joined ABC News in 1975, covering the White House, Congress and other national news.

For his career in journalism, Gibson has been recognized by the National Endowment for the Humanities and has received the Paul White Award from the Radio Television Digital News Association and the Fred Friendly First Amendment Award from Quinnipiac University.

In addition to Gibson, seniors Rebecca Foresman and Zachary Zimmerman have been selected by senior class leaders to address graduates at Class Day. Foresman is a French and Italian major from Del Mar, Calif., and Zimmerman is a religion major from Myrtle Beach, S.C.

Class Day, which takes place the day before Princeton's Commencement, is being organized by members of the graduating class, including chairs Joel Alicea, Henry Barmeier and Bryan Frist. The ceremony also will include the induction of honorary class members and other special recognitions.

The event is scheduled to be held on Cannon Green, weather permitting, at 10:30 a.m. It is a ticketed event for seniors and their invited guests only.