Orange and black -- the history of Princeton's colors 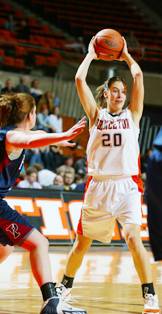 Meagan Cowher of the women's basketball team displays the Princeton colors on the Jadwin Gymnasium court. The first recorded use of orange and black as the University's colors dates back to 1867, when they were first donned for a baseball game against Yale. Photo: Beverly Schaefer

At left: The University Band, decked out in orange and black, entertains the crowd at the annual Communiversity celebration this past spring. Photo: John Jameson 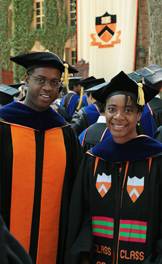 Orange and black are the official colors for Princeton's academic gowns, shown here during the University's Commencement ceremony in June. Photo: Denise Applewhite    At left: Members of the class of 1976 gather in their class jackets for a group photo at their 25th Reunion. Alumni classes began wearing their colorful commemorative jackets in 1912. Photo: Courtesy of Mudd Manuscript Library

For more than a century, students and alumni of Princeton University have worn orange and black to signal their allegiance to the school.

• The first recorded use of orange and black as the University's colors came at a baseball game at Yale on June 26, 1867, following a suggestion by freshman George Ward. He proposed that orange be used for the school's colors since William III of the House of Nassau, in whose honor the University's first building had been named, also carried the title the Prince of Orange. Members of the Class of 1869 Base Ball Club wore badges of orange ribbon with black lettering. The team came from behind with two runs in the ninth inning to win the game.

• On Oct. 12, 1868, the faculty resolved to permit students "to adopt and wear as the college badge an orange-colored ribbon bearing upon it the word 'Princeton.''' Two weeks later, at the inauguration of James McCosh as the 11th president of the University, such badges were worn by many, and the use of orange with black printing became official.

• Princeton's trustees adopted orange and black as the official colors for academic gowns in 1896. That year, Professor Allan Marquand pointed out that the colors of the House of Nassau were orange and blue. His objection, however, won little support.

• The most distinctive black-and-orange item in most alumni's closets is the class jacket, worn by seniors during Class Day activities and donned for marching in the P-rade at Reunions. The commemorative jackets, which first appeared in 1912, feature colorful, bold designs that often intermingle current events with a sense of levity and school spirit.

Video feature: Reunions bring back Princeton alumni through the ages