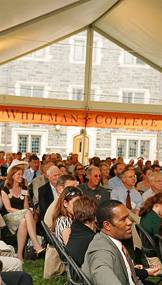 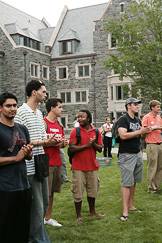 Above and below: Guests included alumni, donors, faculty and staff, as well as the first student residents of the college, who were invited to a festive barbecue following the ceremony. 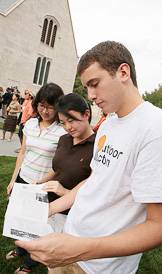 At left: Whitman College Master Harvey Rosen and Meg Whitman, a 1977 alumna who is president and chief executive officer of eBay, cut the ribbon at the conclusion of the ceremony.

View a video introduction to the students and faculty of Princeton's Whitman College.       Photos: Denise Applewhite

Surrounded by soaring walls of hand-set stone and the magnificent crenelated tower of the new Whitman College, members of the Princeton University community gathered Thursday, Sept. 27, to celebrate the residential college's completion and formally dedicate it.

"We are gathered in the center of a college complex that combines tradition and innovation," said President Shirley M. Tilghman, referring to the marriage of architectural details that reflect the Collegiate Gothic style with the state-of-the-art facilities inside. "(This) is the largest, most ambitious single building project in the history of Princeton University. It took 77 stone masons and 30 laborers a full year to place and shape the more than 150,000 individual stones that make up these buildings." 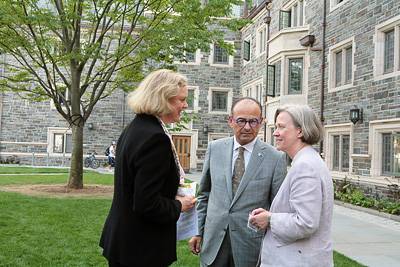 Whitman is the University's sixth residential college, but the first to be built as a single project. Its completion launches Princeton's four-year residential college system, in which juniors and seniors now have the opportunity to maintain close ties to their colleges throughout all four years of their Princeton careers.

The college is named for Meg Whitman, president and chief executive officer of eBay, and her family, which donated $30 million toward the project. Whitman is a graduate of the class of 1977.

Speaking before the crowd of 350 who gathered under a tent in the 1963 Courtyard for the ceremony, Whitman said, "Princeton shaped the very person that I am today. And whether it was on the athletic fields, in the classroom, or working on some student-run initiatives or working on Business Today magazine, I learned self-confidence and I learned the benefits of being able to try things you've never done, with a little bit of a safety net."

The 250,000-square-foot Whitman College is as unique for its design as for the techniques employed to build in a traditional manner in the 21st century. Walls of hand-set stone rise from 20 feet to as high as 100 feet to make up the complex of residential, social and academic buildings that sweep upward above terraced courtyards. Bluestone walkways criss-cross at the feet of dorms and communal buildings, which include a large gabled dining hall and a great tower that announces the entry into the college near the south end of Princeton’s campus.

Architect Demetri Porphyrios, founder and principal of the London-based firm Porphyrios Associates, designed Whitman to ensure that its form would enhance its function.

"A university education has to do with what a student learns, (but) it has also to do with social interaction," said Porphyrios, a 1980 Princeton alumnus with a doctoral degree from the architecture school. Recalling his graduate student days, he added, "It is actually the latter that leaves the indelible marks in someone's life."

Construction on the college began in July 2004, and Whitman opened this fall to host its first group of students.

Chip McCorkle, a junior history major from Durham, N.C., and the chair of the Whitman College Council, spoke about the efforts the students at Whitman already have made to initiate college projects such as volunteer opportunities.

"One thing Whitman is without is tradition," he said. "So it's our responsibility to start traditions that will attract students for generations."

University Trustee Peter Wendell, a member of the class of 1972, told the gathering, "This is a wonderful day for Princeton. A new part of Princeton has been created that will last not just for decades but, as the architect has just promised us, for several centuries."