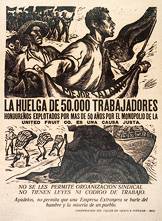 "La Huelga de 50,000 Trabajadores" ("Strike of 50,000 Workers"), designed by Alberto Beltrán in 1955, is among the prints and posters included in an exhibition of works from Mexico's foremost political printshop, El Taller de Gráfica Popular, on display at Firestone Library's Milberg Gallery through Sunday, Feb. 10. 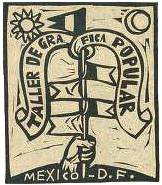 Founded in 1937, the workshop was a vibrant collective of established and emerging artists committed to the use of visual art in the service of social change.

Founded in 1937, the workshop was a vibrant collective of established and emerging artists committed to the direct use of visual art in the service of social change. Mexico has a long history of politically charged printmaking, largely credited to the work of José Guadalupe Posada, who was an artist and social critic during the 1910 Mexican Revolution. The exhibition begins with a group of booklets designed by Posada, representing the genesis of the modern Mexican print. 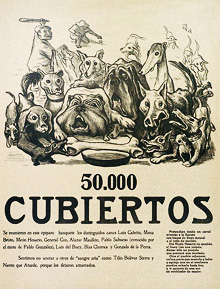 In the aftermath of the revolution, TGP was established by Leopoldo Méndez, Pablo O'Higgins and Luis Arenal, who worked with a small group of dedicated printmakers to serve Mexico's progressive movements. Each artist was required to pay a membership fee, participate in a weekly group critique and contribute 20 percent of his or her earnings to the workshop. They printed posters and other materials in support of unions and agricultural workers, endorsed national literacy programs and movements for social justice, and condemned fascism. In the tradition of Posada, they produced a constant stream of handbills and fliers using witty topical songs and satirical skeletons as caricatures of corrupt politicians and officials.

The Princeton University Library's Graphic Arts Collection acquired a small group of posters and fliers by the TGP. The opening of the library's exhibition of a selection of these works was marked by a lecture by Mexican novelist, poet and playwright Carmen Boullosa on Sunday, Oct. 7.

Princeton's entire collection of prints from El Taller de Gráfica Popular has been digitized and can be viewed at diglib.princeton.edu.

The exhibition is sponsored by the Friends of the Princeton University Library and the Program in Latin American Studies. 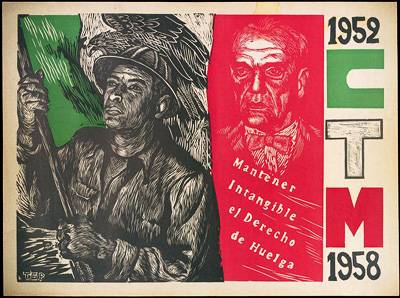