Stretching the boundaries of tragedy and comedy 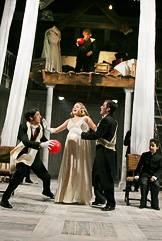 From left, Polixenes (sophomore Kut Akdogan), Hermione (junior Sara-Ashley Bischoff), Leontes (sophomore Adam Zivkovic) and Mamillius (Asher Muldoon) enjoy a lighter moment, as the Older Leontes (Paul Muldoon) looks on from above in the Program in Theater and Dance's production of William Shakespeare's "The Winter's Tale." Performances are at 8 p.m. Thursday through Saturday, Nov. 15-17, in the McCarter Theatre Center's Berlind Theatre.

Above left: The Older Leontes remembers his lost child. 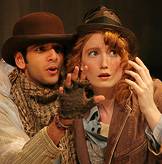 An Old Shepherdess (sophomore Heather May), right, and her son (freshman Irfan Kherani) comically recount some recent disasters. At left: Antigonus (senior Will Ellerbe), abandoning Leontes' child on a seacoast, recounts a dream vision of the king's wife, Hermione (in doorway). 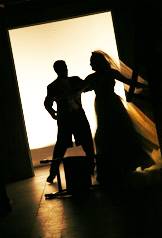 Leontes and Hermione relive a loving moment from their shared past.   At left: Senior Georgina Sherrington, left, who is serving as assistant director, and director Tracy Bersley compare notes during a rehearsal.   Photos: John Jameson 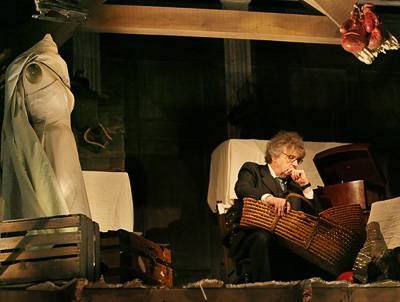 Princeton's Program in Theater and Dance will present "The Winter's Tale," William Shakespeare's story about jealousy and redemption, at 8 p.m. Thursday through Saturday, Nov. 15-17, in the McCarter Theatre Center's Berlind Theatre.

Shakespeare, in the final stage of his theatrical career, stretches the boundaries of both tragedy and comedy to create a play unique in its form and lacerating in its exploration of the havoc that the sprites and goblins of a jealous imagination can wreak. 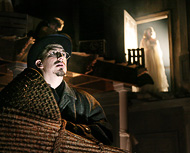 Directed by faculty member Tracy Bersley, a New York-based director and choreographer, this re-imagining of Shakespeare's play takes place in the memory of its leading character -- an attic library of regret and recrimination designed by Jeffrey Van Velsor, a longtime collaborator of Bersley's.

The cast also includes Pulitzer Prize-winning poet Paul Muldoon, chair of University's Lewis Center for the Arts, and his son, Asher Muldoon. The Program in Theater and Dance is a division of the center.

Tickets range from $10 to $15, and may be ordered by calling the McCarter Theatre Center at (609) 258-2787. "The Winter’s Tale" has been made possible by a grant from the David A. Gardner '69 Magic Project, with additional funding from the Kirby Family Foundation. 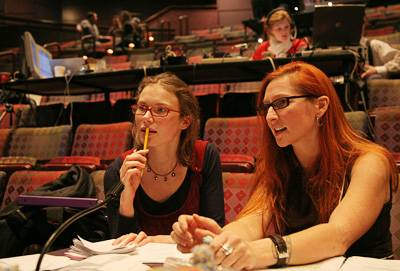