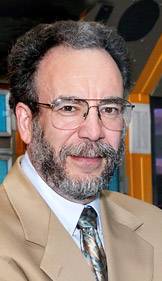 After more than 10 years at the helm of the U.S. Department of Energy’s Princeton Plasma Physics Laboratory (PPPL), Robert Goldston has announced he will step down as director to focus on a broad range of domestic and international fusion energy initiatives. The University immediately will launch an international search for a new director, whose appointment will become part of Princeton's proposal when it competes for a new contract to continue managing the lab.

Goldston joined PPPL as a graduate student in 1972, earned his doctorate in astrophysics from Princeton in 1977, and served in positions of increasing responsibility, including becoming a professor in the University's Department of Astrophysical Sciences, until being named the lab's director in 1997. He will remain as director until his successor is in place next year.

Goldston led the lab through the construction of PPPL's National Spherical Torus Experiment (NSTX) ahead of schedule; the decommissioning below budget of the Tokamak Fusion Test Reactor (TFTR), one of the world's largest magnetic fusion devices; the beginning of construction of the innovative National Compact Stellarator Experiment (NCSX) fusion plasma confinement facility; the introduction of advanced computing to the lab's theory department; and a broadening of the lab's plasma science and technology activities. He also led the defining of the U.S. plan for fusion development for the Fusion Energy Sciences Advisory Committee and participated actively in negotiations leading to the international ITER Project on fusion power.

"I have been involved in many of fusion's big policy challenges," Goldston said in announcing his decision Thursday, Dec. 13, at his 11th annual State of the Lab talk. "I have now decided, however, that after these 10 exciting years, it will be better for the laboratory -- and will let me continue to put my own efforts strongly into moving fusion forward -- if we find a new candidate for director in our proposal for the next five-year contract period."

The U.S. Department of Energy, which funds PPPL, plans to hold a national competition for a new management and operations contract for the lab, with the goal of having a new contract in place when the University's current contract expires Sept. 30, 2008. Princeton has managed the lab successfully since its inception in 1951. The lab's research is focused on the physics of the very hot ionized gas, called plasma, that is used to produce energy from the fusion of light atoms.

Goldston, who will retain his current position of professor of astrophysical sciences after the naming of his successor, said he is interested in continuing to contribute to the achievements of the lab. He plans to expand his studies of the safety and environmental advantages of fusion energy, and its role in mitigating climate change.

Goldston noted that he also has an important responsibility in serving on the Science and Technology Advisory Committee for ITER, the international project to design and build an experimental fusion reactor in Cadarache, France.

"I am eager to help the U.S. fusion community define new domestic research directions, perhaps taking advantage of results from our NSTX experiment to open up new avenues of research," Goldston said.

"Under Rob Goldston's direction, the lab has made important strides forward and has remained the leading U.S. center for research in plasma physics and fusion, which is vitally important to the development of alternative sources of energy in this country and around the world," Tilghman said. "He also has fostered scientific collaborations with scholars in several areas throughout the University."

According to Princeton's Dean for Research A.J. Stewart Smith, Goldston is responsible for emphasizing the promise of and prospects for fusion to the broad scientific community, government and other constituencies beyond PPPL.

"Within the University, PPPL has strengthened its relationships with the astronomy section of the University's astrophysics department, and also with the departments of computer science and mechanical and aerospace engineering," Smith said. "In addition, Rob has fostered interactions with the Princeton Institute for Computational Science and Engineering, the Princeton Environmental Institute, and most recently the Program on Science and Global Security in the Woodrow Wilson School of Public and International Affairs."

Smith said that PPPL's new director will have to reflect the Department of Energy's high expectations of its labs for scientific leadership and management.

"We will be searching for a new director who will bring outstanding strengths, and in combination with the lab's leadership team, will provide DOE with very high confidence in both of these areas," he said.

The search committee for Goldston's successor will be chaired by Smith and will include distinguished scientists from Princeton and the international plasma physics community.

DOE Undersecretary for Science Raymond L. Orbach said members of the fusion community are grateful to Goldston for his "seminal scientific contributions" to the field of fusion science while leading PPPL.

"Dr. Robert Goldston has guided the Princeton Plasma Physics Laboratory with skill and commitment during a critical decade of discovery," Orbach said. "Our country, and the entire field, owe him a debt of gratitude for his scientific leadership and insight. His personal and important role was instrumental in the U.S. joining ITER in 2003, a critical step toward fusion energy."

Goldston's research and guidance has been a key factor leading to the possibility of commercial scale fusion energy, Orbach added.

"I have seen up close Rob's unflagging enthusiasm for fusion science and his devotion to moving it forward," Fonck said. "He has also guided the establishment of new levels of collaborations in PPPL experiments, which provides us a template for future international and national cooperative ventures."

PPPL is one of 10 national science laboratories funded by DOE's Office of Science. The department is completing a series of competitive bidding processes for the management and operations contracts for all of these labs.