Below left: U.S. Secretary of Energy Samuel Bodman talks with Princeton freshman Emily Margolis, who had been a student research intern at the Princeton Plasma Physics Laboratory. Bodman visited PPPL on Nov. 21 and emphasized the lab's key role in international fusion research initiatives.

In a visit to the Princeton Plasma Physics Laboratory (PPPL) on Tuesday, Nov. 21, U.S. Secretary of Energy Samuel Bodman stressed the importance of the lab's role in international fusion energy research initiatives.

Bodman toured the research facilities and science education laboratory at PPPL, which he called "the most advanced center for fusion energy research in the U.S." During his visit, Bodman also spoke with researchers and administrators from the lab and the University and met with Princeton students who have served as PPPL research interns to learn more about their work.

Rob Goldston, director of PPPL and professor of astrophysical sciences at the University, said Bodman emphasized the laboratory's critical role in the ITER experiment, a major international fusion energy initiative set for construction in France.

"He encouraged us to plan for the next generation of major research capabilities here in Princeton," Goldston said. "He said to the assembled staff, 'If there is a magic bullet, it's fusion.'" 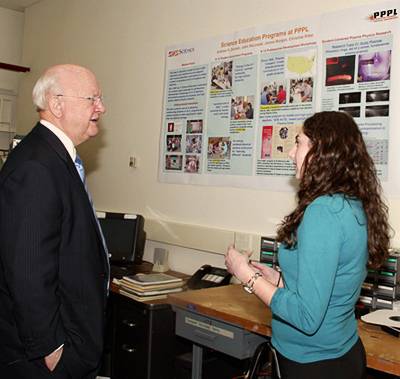 Princeton has announced that it will seek to continue managing the lab after the University's current management and operations contract expires. PPPL is one of 10 national science labs funded by the U.S. Department of Energy's Office of Science, which has announced competitive bidding processes for the management and operations contracts for these labs. PPPL is one of three labs whose management contracts will be part of a bidding process over the next 18 months.

Princeton has managed PPPL since its origins in 1951, when Professor Lyman Spitzer, a founder of the field of plasma physics, initiated the study of fusion at the University. The facility, which was officially named the Princeton Plasma Physics Laboratory in 1961, performs advanced research on fusion energy, an environmentally benign and abundant energy source.

The laboratory is currently operating a major innovative research facility, the National Spherical Torus Experiment, and is completing construction of a second critical facility for the study of fusion plasmas, the National Compact Stellarator Experiment.

More information and photos from Bodman's visit are available on the PPPL website.