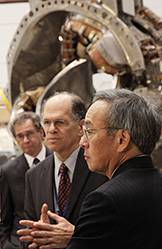 U.S. Secretary of Energy Steven Chu discussed with staff at the Princeton Plasma Physics Laboratory (PPPL) Sept. 27 how scientists must come to the country's aid in times of need, and how nuclear energy -- both fission and fusion -- could be solutions to the world's energy challenges.

The Nobel-Prize winning scientist described the lab as being at the center of the intellectual "birth" and "coming of age" of plasma and fusion science.

Chu made two predictions, but first used a humorous quote from Yogi Berra: "It's tough to make predictions, especially about the future."

Chu foretold that in the coming decades, the price of oil will be higher, driven by the laws of supply and demand, and that climate change and its risks will become so starkly apparent that people will live in a carbon-constrained world.

"Our profound dependency on oil is driving us to an increasingly challenging environment," Chu said, noting that the increase of CO2 in the atmosphere has the fingerprints of human activity on it. "We will be in new territory ... this is pretty serious business." 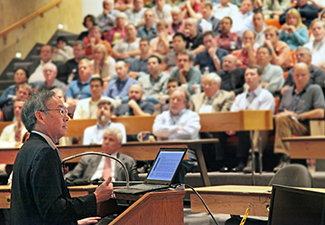 Chu discusses alternative energy approaches with staff at the Princeton Plasma Physics Laboratory during the Sept. 27 visit to the Department of Energy-supported lab.

Chu talked about approaches to achieving energy and global climate goals, saying that to realize the goals the world must use energy more wisely and develop and deploy low-carbon technologies.

"Science has shown that we are altering the destiny of the Earth. The full impact of what we have done already will not be known for 100-plus years. The full cost of future damages is not known," he said. Scientists must come to the nation's aid by developing new technologies, Chu said. Energy innovation hubs supported by the U.S. Department of Energy (DOE) are one way.

Among Chu's activities in the tri-state area Sept. 27 was a press conference at the Philadelphia Navy Yard about DOE awarding $122 million to a research consortium to establish an Energy Innovation Hub focused on developing technologies to make buildings more energy efficient. PPPL will receive $1.2 million over five years to lead the hub's education and workforce development task, while researchers from Princeton's engineering school will receive almost $3 million to focus on developing sensors for measuring how energy flows through buildings, and on creating computerized systems that can use that information to better manage how homes are heated and cooled.

Chu closed his remarks at the lab with a Native American saying about how human beings should care for the planet: "Treat the earth well: it was not given to you by your parents, it was loaned to you by your children." 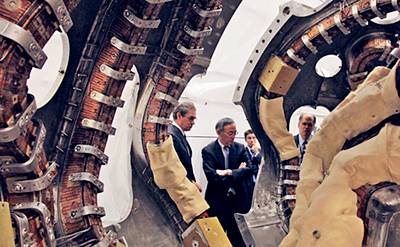 Chu (center) receives an explanation of the components of PPPL's National Compact Stellarator Experiment during a lab tour with Neilson (left) and Prager. The stellarator is a type of fusion experiment.

Chu also toured the research facilities and science education laboratory at PPPL, spoke with researchers and administrators at the laboratory, and met with Princeton University President Shirley M. Tilghman and Provost Christopher Eisgruber.

PPPL Director Stewart Prager said of Chu's visit, "Secretary Chu presented an eloquent and enormously persuasive argument for reducing the carbon footprint of the Earth's population. We appreciate having had the opportunity to discuss with Dr. Chu how magnetic fusion energy fits centrally within this vision."

The University has managed PPPL since its origins in 1951, when Professor Lyman Spitzer, a founder of the field of plasma physics, initiated the study of fusion at the University. The facility, which was officially named the Princeton Plasma Physics Laboratory in 1961, performs advanced research on fusion energy, an environmentally benign and abundant energy source. PPPL is one of 10 national science labs funded by DOE's Office of Science.