Chios, Martino Zaccharia, silver grosso, 1324-1329. This silver coin of the island of Chios in the eastern Aegean imitates the main silver coin of Venice, the grosso; on the obverse (above) it depicts Zaccharia standing with Saint Isidore, and has a seated image of Christ on its reverse (below). Zaccharia bears the title "Servant of the Emperor" in recognition of the fact that the island was given to his grandfather by the Byzantine emperor in return for protection against the Ottoman Turks. 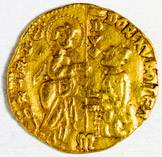 Lesbos and Ainos, Dorino Gattilusio, gold ducat, 1400-1449. This gold imitation of the Venetian ducat has Gattilusio identified as "Duke of Myteline" kneeling in front of a saint (above); the reverse (below) has a standing figure of Christ. The Gattilusio were made lords of Lesbos on the island of Myteline and Ainos in Thrace on the mainland by Byzantine emperors as a reward for their defense against the Turks. The Sarmas specimen is the only known example of the coin with an M beneath the standard, apparently an identification of the island of its minting. 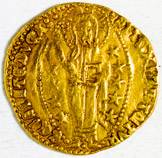 A recent acquisition by the University Library's Department of Rare Books and Special Collections of more than 800 coins from medieval Greece will help researchers deepen their knowledge about a period of Middle Age history that has been little understood by scholars.

The Sarmas Collection of coins from medieval Greece is available to researchers on campus and around the world through the University Numismatic Collection. The new coin collection, assembled by London-based businessman Theo Sarmas, comprises coins minted in the eastern Mediterranean in the 13th and 14th centuries following the fall of Constantinople by armies of the Fourth Crusade.

"This makes Princeton an unrivaled resource for the study of a coinage about which there are many unanswered questions," said Alan Stahl, curator of the University Numismatic Collection. "Until now there has been no specialized collection of the coins of the Greek lands of the later Middle Ages available for study to the public."

The coins were acquired in November with matching funds provided by the University's Program in Hellenic Studies, which contributed with the support of the Stanley J. Seeger Hellenic Fund. The fund was established to promote the understanding of Greek culture at the University.

John Haldon, professor of history and Hellenic studies, said the Sarmas coins are an important addition to the teaching materials available at the University.

"Students all too rarely have an opportunity to handle coins and to understand how they were made, their iconography, and their size and weight," Haldon said. "Along with the University's existing holdings, these coins will considerably increase research opportunities open to students at all levels."

Maria Mavroudi, professor of history and Hellenic studies, said the collection is a valuable source of information about Greek lands in the late medieval Byzantine era. The collection is rich in coins minted in the Greek peninsula and Aegean islands that imitate important trade coins of Italian cities, especially those of Venice and Naples.

"This is a remarkable research tool," Mavroudi said. "The period that the collection covers is generally poorly documented in sources and little understood by scholars. Study of these coins can help scholars map out how the eastern Mediterranean economy functioned in the 13th and the 14th centuries."

The largest part of the collection features coins of the rulers of mainland Greece in the late Middle Ages, chiefly members of the Villehardouin family of Athens and the Angevin rulers of the Peloponnesus. Examples of note include a silver coin of Chios minted by Martino Zaccharia in the period between 1324 and 1329, which imitates the silver grosso of Venice, and a gold coin of Dorino Gattilusio, lord of Lesbos and Ainos from 1400 to 1449, which imitates the popular gold ducat of Venice.

Dimitri Gondicas, executive director of the Program in Hellenic Studies, said the acquisition of the Sarmas Collection is part of the program's continued collaboration with the library's Department of Rare Books and Special Collections to acquire relics that can be used for teaching, research and public exhibits that attract visitors to the University from around the world.

The acquisition of the Sarmas Collection follows the 2006 donation of the Wu Collection of Chinese coins, which already has attracted American and Chinese scholars to the University. The Sarmas coins, along with other holdings in the University's extensive collection of Greek and Roman coins, are currently being catalogued for the online database for numismatics. The University started the database in 2005 to provide Web-based access to the collection through a searchable catalog with photographs and descriptions of the objects.

Part of the collection is currently on display in the "Numismatics in the Renaissance" exhibition, which is on view through July 20 in the main exhibition hall of the University's Firestone Library.

The University Numismatic Collection is available for research to the public and the University community. To make an appointment to view specific items, including the Sarmas coins, contact Stahl at stahl@princeton.edu.