When she peered into the screen of her computer one day in January, Alicia Soderberg was supposed to see a small, dull glowing smudge in one corner, the evidence of a month-old supernova that would help her better understand the mystery of these huge exploding stars.

What the Princeton University astronomer saw instead was anything but dull. As Soderberg and Edo Berger, a postdoctoral research associate at Princeton, studied the X-ray emissions conveyed from space by NASA's Swift satellite, they saw an extremely bright light that seemed to jump out of the sky.

They didn't know it, but they had just become the first astronomers to have caught a star in the act of exploding. The once-in-a-lifetime event, described in a paper published in the May 22 issue of Nature, has transfixed the worldwide astronomical community.

"In the old days -- last year -- people found supernovae by their optical light and then started to study them to understand which stars blow up, what the mechanism is and what they produce," said Robert Kirshner, a professor of astronomy at Harvard University. "But this is something new -- the X-rays come right at the beginning and provide a very early alert to the event."

Soderberg regards the discovery as a case of extreme serendipity. The satellite was pointing in the right place at the right time, she said, because she had asked Neil Gehrels, Swift's lead scientist at NASA's Goddard Space Flight Center in Greenbelt, Md., to turn it that way to look at another supernova. And while she was away lecturing, she had asked her colleague, Berger, to keep an eye on the data for her.

"It's a really lucky chain of events -- a surprise," said Soderberg, who is leading the group studying the explosion. "It was all over in a matter of minutes."

Soderberg and Berger wanted to observe a supernova known as SN 2007uy in the spiral galaxy NGC 2770, located 90 million light years from Earth in the constellation Lynx. They could plan to do that because they are able to view images captured by the telescope a few hours after the observation merely by downloading the data from the Swift website. The sudden appearance nearby of the X-ray burst of the newer supernova, easily captured by the NASA satellite with multiple instruments that can detect gamma rays, X-rays and ultraviolet light, has set scientists on a new path. 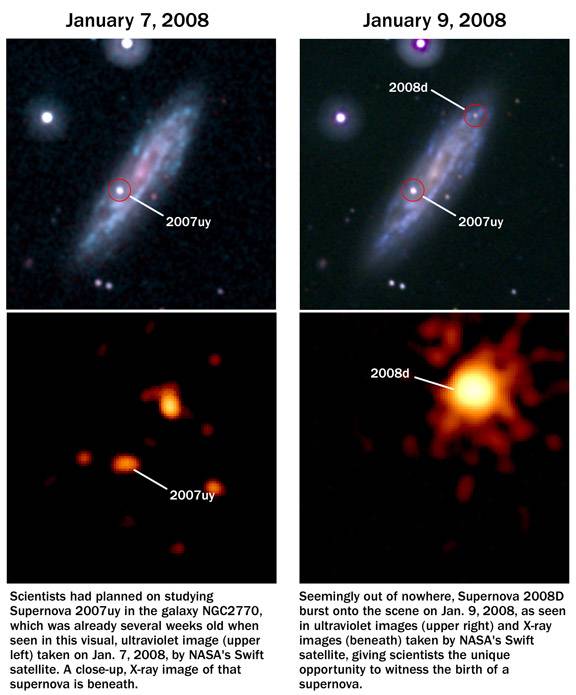 "This phenomenon had been predicted more than 30 years ago, but is now observed for the first time," said Roger Chevalier, the W.H. Vanderbilt Professor of Astronomy at the University of Virginia. "These are the earliest observations of light from a supernova after the central collapse that initiated the explosion."

In the Nature paper, Soderberg and 38 colleagues show that the energy and pattern of the X-ray outburst is consistent with what scientists would have expected to see in the birth of a neutron star -- a shock wave blasting through the surface of the original massive star.

A typical supernova occurs when the core of a vast star runs out of nuclear fuel and collapses under its own gravity to form an ultra-dense object known as a neutron star. The next activity is what the scientists were able to see for themselves -- the newborn neutron star first compresses then rebounds, triggering a shock wave that plows through the star's gaseous outer layers and rips the star apart.

Until now, astronomers have only been able to observe supernovae brightening days or weeks after the event, when the expanding shell of debris is energized by the decay of radioactive elements forged in the explosion.

Supernovae are fascinating to researchers because, in the destruction of their progenitor and in their own creation, all the elements in the universe are produced and injected into galaxies. A small fraction of supernovae turn into black holes and emit gamma rays, according to Soderberg. Most act the way this one, called SN 2008D, does.

Soderberg has been studying these astronomical objects for years, though she didn't start out doing that.

She grew up in Falmouth, Mass., on Cape Cod, loving nature and expecting someday to be an environmental scientist.

Her Astronomy 101 class at Bates College in Maine, however, set her on a different course. "After that, looking at stars was all I wanted to do," she said. She spent her undergraduate summers at places like the Harvard-Smithsonian Center for Astrophysics in Cambridge, Mass., the Kitt Peak National Observatory in Tucson, Ariz., the Cerro Tololo Inter-American Observatory in Chile and the Arecibo Radio Observatory in Puerto Rico.

She came to Princeton's Department of Astrophysical Sciences after earning her doctoral degree from the California Institute of Technology. At Princeton, she is a Carnegie-Princeton Fellow and a Hubble Postdoctoral Fellow. She employs all kinds of telescopes, traveling throughout the world, as she seeks to answer a fundamental question. How, she wants to know, do massive stars die?

With the discovery of the X-ray outburst, Soderberg immediately mounted an international observing campaign to study the newest supernova. Scientists peered at SN 2008D using the Hubble Space Telescope, the Chandra X-ray Observatory, the Very Large Array in New Mexico, the 200-inch and 60-inch telescopes at the Palomar Observatory in California, the 3.5-meter telescope at the Apache Point Observatory in New Mexico, and the Gemini North Telescope and the Keck 1 Telescope, both in Hawaii.

"I guess the most important thing this shows is that it pays to be alert and to follow things up with energy," said Kirshner of Harvard, who mentored Soderberg during her college years. "Alicia has always been an energetic phenomenon: She has a keen sense of the possibility of finding something new by moving fast to get the data, and SN 2008D is just one more case where this has paid off."