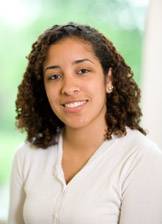 From the June 2, 2008, Princeton Weekly Bulletin

Princeton senior Sian ÓFaoláin has been awarded the University’s Henry Richardson Labouisse ’26 Prize, which will allow her to focus on issues of transnational migration in South Africa.

ÓFaoláin is a major in the Woodrow Wilson School of Public and International Affairs and is a candidate for certificates in Latin American studies and African American studies. While Atlanta is her hometown, ÓFaoláin's background is multinational and multiracial, which she points to as an important factor behind her interest in matters relating to migration and belonging.

ÓFaoláin initially visited South Africa in her junior year, studying for a semester at the University of Cape Town as part of a Wilson School policy task force on land and water resources.

Her plans for her return to South Africa in January are still being shaped, but she hopes to enroll in a master's degree program in forced migration studies at the University of Witwatersrand in Johannesburg. She also is researching various human rights organizations for a position that will bring her into direct contact with the plight of migrants, many of whom currently are crossing into South Africa from Zimbabwe to escape the ongoing political and economic crisis there.

"Transnational migration is a growing phenomenon, and I'm interested to learn how different countries deal with immigrants, documented and undocumented, and how people incorporate themselves into the host society," said ÓFaoláin. "I think seeing things from a new and sometimes foreign perspective can help question the assumptions we live by."

Throughout her undergraduate career, ÓFaoláin has deepened her engagement with concerns centered on migration and community-building.

While studying in Cape Town, she regularly took a one-hour bus ride to interview residents of the township Imizamo Yethu, to learn about issues related to land, housing and employment. The result of this research was her junior paper, which emphasized the importance of dialogue in bringing about community-based change. She also took a number of photographs of daily life in Imizamo Yethu, which recently were displayed in the Bernstein Gallery of Robertson Hall.

For her senior thesis, ÓFaoláin wrote about transnational migration between Mexico and the United States, with a particular focus on child support policies. Her adviser was Douglas Massey, the Henry G. Bryant Professor of Sociology and Public Affairs, who studies international migration, urban planning and race in American society.

"Sian considers herself a child of globalization, and so was keen to write her thesis on child support and well-being in the transnational context of Mexico-U.S. migration," said Massey. In noting the timeliness of studying transnational migration in South Africa, he said that "since the end of apartheid, South Africa has emerged as the major migrant-receiving area in sub-Saharan Africa."

ÓFaoláin's goals for her Labouisse year are galvanized by more than her academic work. Her extracurricular activities underscore her commitment to employing ongoing dialogue as a means of addressing social divisions. Most notably, she has served as president of the University branch of Sustained Dialogue, which aims to create an open and healthy campus climate by convening small-group discussions on topics such as race relations. Under ÓFaoláin's leadership, the organization sponsored six dialogue groups on campus and hosted the Sustained Dialogue Campus Network annual conference in 2006.

"Sustained Dialogue has certainly been instrumental in my commitment to issues of social equality," said ÓFaoláin. "It is a process that is applicable in all types of relationships among individuals and groups, which is what makes it a tool that I will continue to use in my personal and professional lives."

This spring, ÓFaoláin was named one of eight winners of the 2008 Spirit of Princeton Award, which honors Princeton undergraduates for their positive contributions to campus life. She also is co-founder of the Union of Multiracial and Multicultural Students and a member of Princeton for Workers Rights.

After her return from South Africa, ÓFaoláin plans to attend law school.