Students in Spain soak up history, art and language 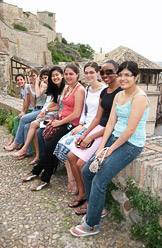 Undergraduates participating in the new Princeton in Spain program this summer spent a month in the city of Toledo, focusing on intensive language study and immersion into the local culture. The students' cultural excursions included this visit to the 16th-century chapel of San Juan de los Reyes. Photo: Antonio Calvo

At left: This view of the Toledo skyline was taken from the Fundación Ortega y Gasset, a Toledo school where the Princeton students studied this summer.

The city of Toledo, Spain, became a summertime classroom for 33 Princeton undergraduates who spent a month there studying the Spanish language and immersing themselves in the local culture.

The Princeton in Spain program, in its inaugural year, offered the students an opportunity to learn Spanish intensively, live with local families and volunteer with elementary school students during the month of June. And it gave the students the chance to see the world in a new way. 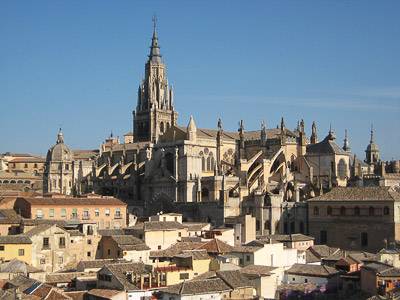 "The program challenged me to see beyond my own relatively limited worldview in order to understand Spanish culture's distinct viewpoints and traditions, something I never could have achieved from the comparative comfort of a Princeton classroom," said Kevin McGinnis, a member of the class of 2011.

Students who were less experienced in Spanish spent three hours a day in language instruction, followed by a class in Spanish culture. More advanced students took classes in culture and society as well as in Spanish art. Classes were held at Fundación Ortega y Gasset, a Toledo school, and were taught by instructors from the school as well as Princeton faculty members. 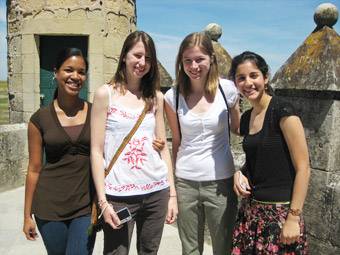 Once a week classes were held at either the Museo del Prado or the Museo Reina Sofía in Madrid -- half an hour from Toledo by high-speed train -- to give students "direct exposure to the masterpieces they were learning about in class," said Antonio Calvo, a senior lecturer in Spanish and Portuguese languages and cultures at Princeton, who directed the program. The students, who are rising sophomores and juniors, also traveled to Madrid and Segovia, where they visited historic sites.

"This was a bunch of curious and brave students eager to push further their knowledge of Spanish culture," Calvo said.

Marieugenia Cardenas, a member of the class of 2011, learned that "sometimes experiences outside of the classroom are more enlightening than those inside of the classroom," she said. "Professor Calvo would always encourage us to go out and get a real look at things, as well as encouraging a sense of curiosity."

For Joseph Stanger, a member of the class of 2011, the experience demonstrated the benefits of exploration. "After getting lost a few times on the windy streets, I began to appreciate the beauty and mystery of the ancient city," he said.

Members of the group taught English to local elementary school students, which afforded them a "chance to interact with younger students who were always excited to see us and as enthusiastic to learn about the United States as I was to learn about their country," said McGinnis.

Many found their stays with a local family to be the trip's highlight. For John Preston, a member of the class of 2011, living with a Spanish family gave him "firsthand experience with Spanish culture" and demonstrated to him "how you can communicate with a limited vocabulary," he said. Students were required to be home with their families for breakfast and dinner, exposing them to conversations about food, culture and the Spanish devotion to soccer.

For Scott Baxter, a member of the class of 2011, the most rewarding part of the trip was interacting with his Spanish peers. "These conversations were great practice, and they taught me the most about contemporary culture in the city," he said. 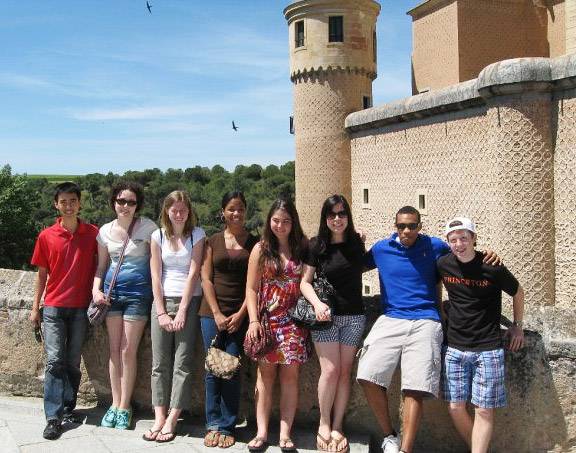 In addition to spending time in Toledo, the students explored historic sites in other cities, including this stop at El Alcazar, a fortress in Segovia. Photo: Antonio Calvo