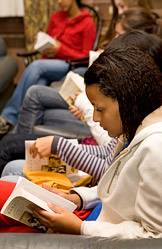 Freshmen from across the country and around the world are exploring issues of identity and belonging in the seminar "Growing Up Global: Novels and Memoirs About Transnational Childhoods."

"Where are you from?" is a question that many new Princeton students ask each other. It has particular import in the freshman seminar "Growing Up Global: Novels and Memoirs About Transnational Childhoods," in which 15 freshmen from across the country and around the world are homing in on issues of identity and belonging.

The seminar is being taught for the first time by Wendy Belcher, an assistant professor of comparative literature and African American studies, who has a deeply personal interest in the topic. The child of American and Canadian parents, Belcher grew up in Ethiopia and Ghana. The experience, which she wrote about in her memoir "Honey From the Lion: An African Journey," continues to inspire her teaching and writing.

"I arrived at college confused about my identity, sure I didn't really belong anywhere," Belcher said about her return to the United States as a teenager. "It was only over time that I became aware that there is some power, as [the writer] Pico Iyer puts it, in having 'a wardrobe of selves from which to choose.'"

Among the students in the seminar, Belcher said that nearly half are "global nomads" who have lived in more than one country. A larger number of students grew up in bilingual homes in the United States with at least one immigrant parent.

One of the students with a global background is Alya Forster, the daughter of an Egyptian mother and a British father who met at Princeton in the 1980s as graduate students. Forster was born and raised in Chicago, but she identifies strongly with her Egyptian heritage. She enrolled in the seminar to learn how other Princeton students address growing up among cultural difference.

"I thought it would give me a way to explore how other people in similar situations as myself have dealt with reconciling the differences between all of the cultures that they consider to be a part of them," said Forster. "I find myself straying more and more from any one culture, and I was interested to read about people who had the same situation, perhaps just for a sense of reassurance."

Certain that she herself would have benefited from such a seminar, Belcher said she wanted students to "have the chance to puzzle together over the contradictions of this condition of being unrooted and read the work of those gifted in describing the symptoms of estrangement."

Alicia Zeng, who was raised in Oregon and California and moved to Shanghai at age 12, said she chose the seminar because it foregrounds questions important to her own life.

"The themes we probe most deeply in the course, those of alienation and identity and discovery, are major currents in my own life," said Zeng. "I love how in the class we can all share our stories and know that we will actually be understood. I've learned a lot about myself in this class."

Kevin Kim, who is a South Korean born in Japan, and who later moved with his family to California and then to Indiana, said, "I've had a transnational childhood myself, but have never reflected upon it in an academic manner. The class has encouraged me to re-evaluate my identity and examine if being bilingual and bicultural means that I really have two distinct identities."

The students also are learning about different approaches to writing about the self, as well as studying how language can be used to examine identity. A key goal Belcher has for the class -- which is designated as the Agnew Family Freshman Seminar -- is to train the students to read critically and closely. 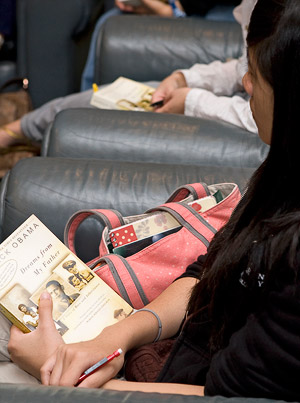 Barack Obama's memoir "Dreams of My Father: A Story of Race and Inheritance," which recounts the president-elect's transnational upbringing, is one of the books on the reading list for the class.

One of the writers they are studying is President-elect Barack Obama, who recounts his transnational upbringing in his memoir "Dreams of My Father: A Story of Race and Inheritance."

On a recent evening, students discussed the ways Obama had reconstructed the colonial identities of his Kenyan father and grandfather from studying some of their personal documents. These included college recommendation letters for his father, who went to Hawaii to study, and his grandfather's register book from the British colonial era, which catalogued his racial characteristics and classified him as a domestic servant.

A student observed that Obama, by gaining a better understanding of his Kenyan ancestors, began to "realize how much he too would have to invent himself" as he made his own future.

Other books on the reading list include Eva Hoffman's memoir "Lost in Translation: A Life in a New Language"; Susan Choi's novel "The Foreign Student"; Alice Kaplan's memoir "French Lessons"; and Linda Furiya's memoir "Bento Box in the Heartland: My Japanese Girlhood in Whitebread America." The class started with Iyer's article "Living in the Transit Lounge," from the essay collection "Unrooted Childhoods: Memoirs of Growing Up Global."

Using these texts as inspiration, each student is writing an individual creative narrative about "moving between cultures," which is then presented to the class.

Xiaolei Mou, who is from Wuxi, China, and who studied in Singapore for four years before coming to Princeton, said in preparing to write her creative narrative, "I am now thinking about my own story and how I can convey my reflections and feelings to readers using a foreign language."

Belcher said that the creative narrative presentations so far have led to her "favorite moments of the course," with essays that are both "moving" and "insightful" in terms of how the students address the "trauma, humor, possibility and terror" associated with identity and communicating across difference.

"As one of my students put it on the first day of class," said Belcher, "growing up global is 'wonderful but very difficult.'"

The seminar is led by Wendy Belcher (far right), an assistant professor of comparative literature and African American studies, who had an international upbringing herself.