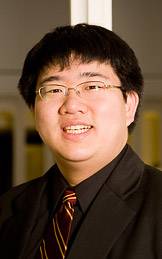 Senior Michael Shih -- a major in the Woodrow Wilson School of Public and International Affairs who is a nationally ranked debater -- is one of 40 American college students awarded 2009 Marshall Scholarships.

Shih, who grew up in San Diego and lives in Houston, hopes to work in policymaking, combining his interests in international law and strategic relations. He is especially interested in relations between the United States and China, which stems in part from his own background.

"As an Asian American, I view myself as existing between these two civilizations," Shih said. "I believe I'm able to access both parts of my identity when I'm reading and writing about these issues."

In the summer of 2006, Shih spent two months in a Chinese language immersion program as a participant in Princeton in Beijing. Spending time in China taught Shih that "Sino-American conflict is by no means preordained," he wrote in his Marshall application. "But such dialogue will not be productive if policymakers continue to pigeonhole their counterparts into convenient assumptions. Only by developing a clear understanding of opposing positions can such myopia be overcome."

Shih's seven years of competing on the debate circuit demonstrated to him that the best way to strengthen one's own argument is to understand the opponent's, he said. He and his teammate on the Princeton Debate Panel, junior Daniel Rauch, have been ranked among the top 10 teams nationwide for two years.

Shih won Princeton's 1876 Memorial Prize for Debate in Politics in 2006 and 2008, as well as the Walter E. Hope Class of 1901 Memorial Freshman Debate in 2006. He also was awarded the R.W. Van der Velde prize for outstanding work in a Wilson School policy task force in 2008.

"Mike is a brilliant student, an outstanding debater and a terrific human being as well," said Robert Hutchings, a diplomat in residence at the Wilson School. As a student in Hutchings' policy task force on trans-Atlantic relations, Shih mastered a topic that was new to him "with amazing speed. I have never seen anyone at any level assimilate and analyze so much new information so quickly. He not only wrote the best junior paper in the class, he was our lead briefer when the task force presented its collective findings to the director of the State Department's policy planning staff. He is, quite simply, one of the most brilliant and engaging students I have taught in the past 25 years."

Last summer, Shih worked as an intern for the U.S. House of Representatives' Committee on Oversight and Government Reform doing telecommunications research.

Shih has been involved in several community service activities. He founded a program in partnership with the Princeton YWCA that recruits undergraduates to serve as language tutors for non-English-speaking adults in the Princeton community. He has served as a Community Action leader, mentoring freshmen during pre-orientation, and as a tutor at the Princeton Writing Center. He also participated in the Princeton Conversation Partners program, meeting with international graduate students to improve their English skills.

The Marshall Scholarships were established in 1953 as a British gesture to the United States for the assistance received after World War II under the Marshall Plan. Financed by the British government, the scholarships are awarded to American students who have demonstrated academic excellence and leadership potential.