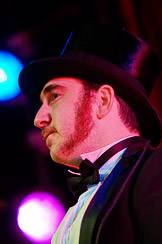 Seniors Jon Feyer (pictured) and Sarah Outhwaite have created a show, "Flammentangel Kabarett," that uses live music, dance and satirical sketches to capture the atmosphere of Weimar Germany in the 1930s. The students both are earning certificates in theater and dance, and this is their senior thesis production. It will be presented Friday through Monday, Dec. 5-8, in the Matthews Acting Studio at 185 Nassau St. 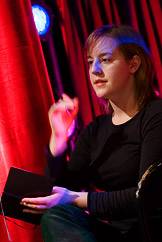 Outhwaite directs the show, which is set in Berlin in 1933. "I wanted to make this piece because Weimar Berlin has such magnetic pull," she said. "So many of the political, moral and artistic questions that dominated through the 20th century were first asked right there, in Germany, between the world wars." 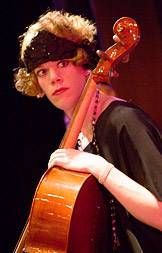 "Flammentangel Kabarett," a senior thesis production that explores the atmosphere of creativity and freedom, decadence and fear that characterized Weimar Germany in the 1930s, will be presented Friday through Monday, Dec. 5-8, in the Matthews Acting Studio at 185 Nassau St. 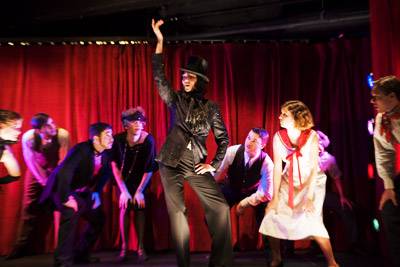 Junior Claire-Marine Sarner (center), in the role of "Anni, the Androgyne," leads the cast in a song and dance number.

Show times are at 8 each evening, and also at midnight on Friday. The show is being presented by the Program in Theater and Dance of the Lewis Center for the Arts. 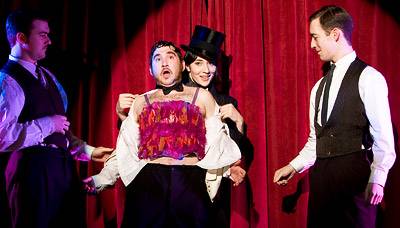 Sarner (in back) shows the crowd that Feyer (center) as "Kurt Werner, the Master of Ceremonies," has some interesting things to reveal under his tuxedo shirt while senior Brandon Lowden (left) as Max Tod, "the Guitarist," and junior Fletcher Heisler as "Michael Mehring, the Pianist," look on in surprise at a lovely red women's top.

Immersing the audience in a vibrant theatrical experience, "Flammentangel Kabarett" removes the usual divisions between audience, stage and backstage. The show, set in Berlin in 1933, uses live music, dance and satirical sketches to capture the reality of a particular time and place whose inhabitants were flirting with chaos. As relationships among the performers start to come undone, just outside the Berlin night catches fire.

"I wanted to make this piece because Weimar Berlin has such magnetic pull," said Outhwaite, who also directs the production. "So many of the political, moral and artistic questions that dominated through the 20th century were first asked right there, in Germany, between the world wars." 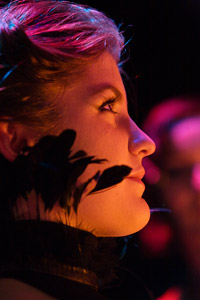 Freshman Ariel Sibert as "Blandi, the Mistress," pauses during a moment on stage.

Outhwaite and Feyer collaborated on the script, which uses old German Kabarett  (now commonly called cabaret) songs as well as routines and skits the two created. Feyer also performs in the role of cabaret owner and comedian Kurt Werner.

"We set out to challenge ourselves with this project and we certainly did, but in the process it became the most fun project I have worked on as well," Feyer said. "Intrinsic to the project were the individual talents and personalities of the cast, because of their interactions with the audience. Parts of the show are improvised every night. This is all very like the process of an old cabaret -- lots of different voices coming together, many people's work sharing the stage."

The seniors have brought their project to life in partnership with musical director and local artist Vince di Mura, set and costume designer Anya Klepikov, and lighting designer and classmate Christopher Simpson.

"We looked at tons of research, of course, but the goal was to translate the authentic research into a world with the feel of the early '30s but which [could be] enjoyed by a contemporary audience as functional cabaret," Kleptikov said. 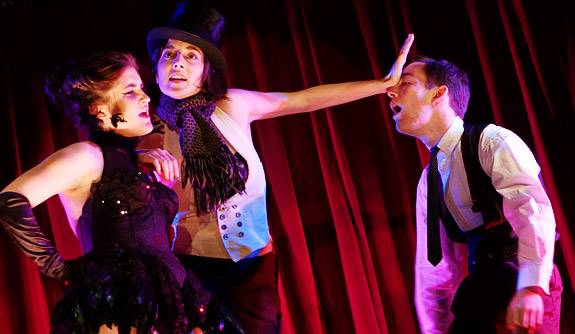 From left, Sibert, Sarner and Heisler act out a skit.

Kenyan play has its American debut in Princeton