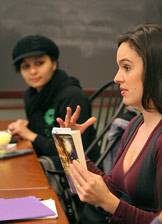 Alexandra Vazquez, an assistant professor of English and African American studies, views performance studies as the starting point for explorations into other realms of knowledge and encourages her students to "build a critical conversation about popular culture."

From the March 23, 2009, Princeton Weekly Bulletin

As a child growing up in Miami, Alexandra Vazquez tuned in to radio stations that flooded her with a versatile range of music. Early on, she discovered that music, and each unique performance, could lead her to a new world of experiences and ideas.

Since then, Vazquez has shaped her fascination for musical performance into an intellectual pursuit that dovetails with her other main academic interests, particularly Latina/o studies. She now is cultivating her passions into new educational opportunities at Princeton -- developing courses and collaborations to explore the cultural and historical essence of various musical forms.

"Music grabbed hold of me at an early age," said Vazquez. "I've been so fortunate to make a career out of something I love to do 24 hours a day.”

Vazquez joined the Princeton faculty in the fall as an assistant professor of English and African American studies; she also is associated with the Program in Latin American Studies. Previously, she was a postdoctoral associate in the Program in Ethnicity, Race and Migration at Yale University and a lecturer in the Clive Davis Department of Recorded Music at New York University. She earned her Ph.D. in performance studies at NYU.

"Alexandra Vazquez is one of the leading scholars of her generation working across multiple fields of inquiry," said Daphne Brooks, an associate professor of English and African American studies at Princeton, whose own eclectic interests embrace music and performance studies.

"Her critical depth and disciplinary range as a scholar are remarkable," said Brooks. "Alex is transforming the ways that we do research on music, performance and live arts, as well as literary production." 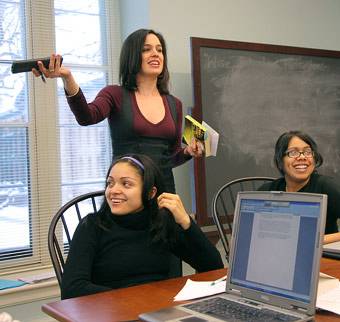 Vazquez said teaching performance studies always moves out from the performance first. "So for example, instead of reading a history of Cuba in a textbook first and then finding some music to adorn that text, what a performance studies scholar would do is flip that equation," she explained. "I would start a seminar playing a song with lyrical translation, and we would try and see what was happening in the song that might not be made legible in the text."

She explained, "So for example, instead of reading a history of Cuba in a textbook first and then finding some music to adorn that text, what a performance studies scholar would do is flip that equation. I would start a seminar playing a song with lyrical translation, and we would try and see what was happening in the song that might not be made legible in the text."

Through such an approach, Vazquez and her students are better able to hear lost voices of populations that may not appear in written texts. With her focus on Latina/o American musical cultures, she opens up other routes to understanding history, especially of peoples who often are marginalized and migratory.

She is interested to know, for example, how Puerto Rican music in New York has morphed from its Caribbean roots, and what happens to music when it criss-crosses borders, such as between the United States and the Dominican Republic. Her forthcoming book from Duke University Press, "Instrumental Migrations: The Critical Turns of Cuban Music," explores the unexamined voices of Cuban music, including women performers and those details that "might get paved over in musical timelines."

Seeking ideas from many sources

Emphasizing that performance studies is "not bound to one method of looking at things," Vazquez informs her work by examining a wealth of cultural materials beyond music, including literature, film, art, theater and dance, and random artifacts such as concert posters. She travels frequently in the Caribbean and Latin America, and takes opportunities whenever possible to talk to musicians and attend concerts, where she eagerly asks fans what they think of a performance.

Even on the Princeton campus she avidly "keeps one ear to the ground," always wanting to know what music her students are listening to. 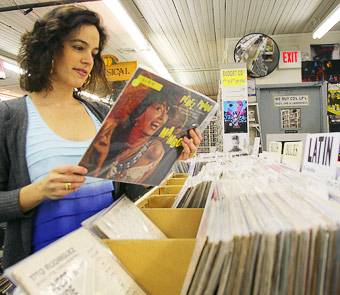 Vazquez, shown here browsing the Latin music selections at the Princeton Record Exchange, draws on her passion for musical performance to inform her research and teaching.

Sophomore Rocio Gutierrez said she took Vazquez's seminar "Latina/o Performance" in the fall because she wanted to "study the arts beyond the written," and she wanted to become more familiar with cultural aspects of her Latina heritage.

"The number of materials and the scope of the disciplines we covered made me realize the extent to which Latinos are present in the arts," said Gutierrez. "Yet I left the course feeling that artists, regardless of where they come from, can be both unique in their portrayals and universal in their performance."

The class also included analysis of stand-up comedy, performance art and street protests, and a trip to New York to see the urban musical "In the Heights" on Broadway.

Senior Brandee Tate, who is majoring in sociology, said she took the seminar because it was on a topic she was not familiar with, but which interested her "both academically and personally." Echoing Gutierrez, she said she "was surprised by the wide range of topics covered in the class, such as the Mexican borderlands, Chicano movement theater and New York Puerto Ricans in hip-hop."

This semester, Vazquez is teaching the interdisciplinary course "Music From the Hispanophone Caribbean," which is cross-listed under African American studies, English and music, and for which students are required to keep a "listening journal" to record their responses to the music they hear. She also is teaching an introductory seminar on U.S. Latina/o literature.

Attentive to the diverse backgrounds and academic interests of her students, Vazquez is vigilant about making class discussions accessible to all students. To that end she always provides English translations of Spanish lyrics and will steer clear of musical theory. 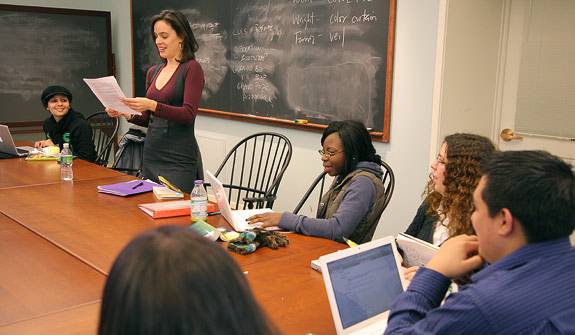 In the interdisciplinary course "Music From the Hispanophone Caribbean," Vazquez asks students to keep listening journals, which they share with classmates, to exchange responses to Latina/o music and draw connections to literature.

"An important ethos for my classroom is that there are no experts," said Vazquez. "I mean that technically and I mean that culturally, so that students can always find an opening. If students bring up a particular term in class, I will ask them to define it on the spot," she said.

By asking students to "embrace a kind of naiveté," Vazquez is honoring a larger objective. "I stress that at certain points in our lives we are going to be a minority," she said. "Being a better citizen of the world is learning to develop an openness to things that we don't understand, and I think that is what going to college is all about. We have to find a way in to approach phenomena we don't and can't know."

Vazquez acknowledges that what many of her students do share is a hands-on familiarity with the media-rich world they inhabit. "I think that this generation is probably the most equipped to do performance studies because of the different kinds of media that they interface with every single second of the day," she said. "For me it's more: How can we give students permission to bring these various analytical skills to the classroom? How can I help them to build a critical conversation about popular culture?"

Oh!Industry provides a lively, ideas-rich but "expert-free" zone for the trio to comment on popular culture from a multitude of angles. It includes interviews with musicians and other performers, a list of famous-people sightings (Charlie Rose and Lou Reed in New York on the same day), and links to video and music clips on YouTube and other interactive sites. Guest writers -- scholars, poets and performers -- are invited to participate as bloggers.

Vazquez explained that Oh!Industry emerged out of a wish to "trouble what a music critic looked, felt and sounded like." She added, "We are an improvisatory enterprise. It's a virtual way to have an intellectual community."

Her intellectual community also is growing at Princeton, where Vazquez is collaborating with fellow faculty to create new learning opportunities.

Rubén Gallo, an associate professor of Spanish and Portuguese languages and cultures and the director of the Program in Latin American Studies, said Vazquez is bringing new courses on "music from the Americas -- from mambo to Reggaetón," and that she is organizing a symposium on Reggaetón for the fall that will include scholars, artists and performers. "Thanks to her, our program is now collaborating with other units at the University, like American studies, for the first time," he said.

Wherever she lends her ear, Vazquez always has something to learn. Recalling a recent sighting of a group of Mexican Norteño musicians on the subway and an assembly of girls choreographing a dance together on a street corner by a school, she said, "Performance is around me all the time, not necessarily something I have to buy a ticket for."