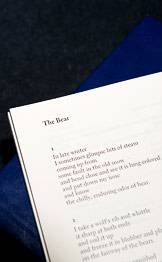 The inaugural Princeton Poetry Festival will draw internationally acclaimed poets to Richardson Auditorium, Alexander Hall, on Monday and Tuesday, April 27-28. Participants will include three distinguished poets who are graduates of Princeton's Program in Creative Writing -- Galway Kinnell '48, Sally Van Doren '84 and Troy Jollimore, a 1999 graduate alumnus. Kinnell's well-known work, "The Bear," is pictured above. The festival, part of the Lewis Center for the Arts Performance Central Program, is free but pre-registration is required. Readings and discussions will run from 2 to 10 p.m. each day. Photo: Brian Wilson

Poets from around the world will read and share their work during the inaugural Princeton Poetry Festival Monday and Tuesday, April 27-28, in Richardson Auditorium, Alexander Hall.

The event, part of the Lewis Center for the Arts Performance Central Program, is free but pre-registration is required. Readings and discussions will run from 2 to 10 p.m. each day.

Hundreds of renowned graduates have studied poetry and the creative arts at Princeton, including Revolutionary War poet Philip Morin Freneau, a member of the class of 1771, and major post-World War II poets William Ralph Meredith '40, Galway Kinnell '48 and W.S. Merwin '48.

Interest in poetry continues to play an essential role in campus life, and the Princeton Poetry Festival is the fruition of a longstanding commitment of Paul Muldoon, the Pulitzer Prize-winning poet who is chair of the Lewis Center for the Arts. Muldoon, who has been thinking about hosting a poetry festival for several years, was pleased to have secured funding for the launch of the inaugural poetry festival this year. He hopes that Princeton will continue to host a biennial international poetry festival in the years to follow.

The selection of this year's poets was based on the quality of their work and includes several of the most esteemed poets in the world. The variety of poetry and translation also is reflected in the poets invited this year.

There is ample precedent for bringing internationally acclaimed poets, novelists and essayists to campus. Princeton's popular Althea Ward Clark Reading Series, sponsored by the Program in Creative Writing, brings a steady stream of world-renowned authors to read at the Lewis Center for the Arts each month. Among the list of distinguished authors who read this year are the South African poet Breyten Breytenbach and former U.S. Poet Laureate Robert Pinsky.

"When one considers Princeton is truly an international venue, one thing we would like to be known for is honoring poets and authors from around the world," Muldoon said. "Princeton has a responsibility not only to its own students and scholars but to the wider community of students and scholars. Many writers not associated with the University live in the area. We like the idea of bringing internationally renowned writers into that mix."

Letters of invitation to the poetry festival were sent to area colleges and universities as well as to public and private high schools in Central New Jersey. "We welcome young students and scholars from local schools. It is here that the next generation of poets and poetry readers are being nurtured," Muldoon said.

"One of the greatest things about poetry is that it does have an international aspect," he added. "Poets are always reading translations of other poets, both contemporary and historical, and they tend to move around the world, often traveling to attend festivals. It is a renewing experience for poets as one is reminded that every individual is doing something quite different but in a way that is universally recognizable."

Initially timed to complement the biennial fall Dodge Poetry Festival, the advent of Princeton's Poetry Festival will help to fill the gap left by the passing of that well-regarded poets' conclave. Although Muldoon was "gravely shocked" by its demise, he hopes that the Princeton Poetry Festival will carry on the high standards of excellence established by the Dodge Foundation.

More information about the festival and registration details are available online.

Members of the print news media are encouraged to attend and should RSVP no later than 5 p.m. Monday, April 20, by e-mailing mdaprile@princeton.edu. For those unable to secure one of the limited number of press seats, open seating may be available immediately before the event. No still or video press photography will be permitted, but photographs of the speakers are available upon request