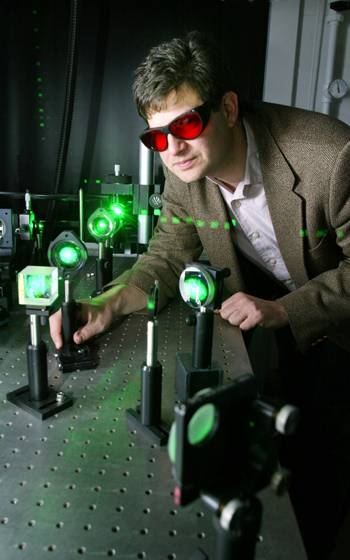 Electrical engineer Jason Fleischer led a group of researchers in inventing a technique to produce sharper images and a wider field of view for medical diagnostics, microscopes and other imaging systems. They demonstrated their approach using green light, reflecting it off a tiny printed chart and passing it through a "nonlinear crystal" that would ordinarily distort the image. Then they created a computer algorithm that not only reconstructs the image but captures details that would otherwise be lost. (Photo: Frank Wojciechowski)

When photographers zoom in on an object to see it better, they lose the wide-angle perspective -- they are forced to trade off "big picture" context for detail. But now an imaging method developed by Princeton researchers could lead to lenses that show all parts of the scene at once in the same high detail. The new method could help build more powerful microscopes and other optical devices.

"It allows you to take a closer look at an object without narrowing your field of view," said Jason Fleischer, an assistant professor of electrical engineering at Princeton who led the research. The study, co-written with graduate students Christopher Barsi and Wenjie Wan, is reported as the cover story in the April edition of Nature Photonics.

Cameras and other optical devices -- including the human eye -- are limited by the amount of light that they can collect through their lens openings, or apertures. In order for a light ray to be recorded, it has to pass through the lens and reach the device's "detector" -- such as the eye's retina or a digital camera's detector. But many light rays never make it to the detector, either because they are too weak, or because they are deflected.

This problem is particularly acute with details that are smaller than the wavelength of light. (Each color of light has a distinct wavelength -- green, for instance, has a wavelength of 530 nanometers, roughly the size of a typical bacterium's internal structure.) Light rays from such tiny features fade before they reach the lens. To capture these rays, devices have to probe very near the surface of the object, and scan it point-by-point, stitching together a full image.

"In effect, these devices suffer from 'tunnel vision,'" said Fleischer.

The new method addresses the shortcomings of small apertures by taking advantage of the unusual properties of substances called nonlinear optical materials. In conventional lens materials such as glass or plastic, rays of light pass through without interacting with one another. In nonlinear materials, light rays mix with each other in complex ways. Rays that don't reach the camera may pass along some of their information to rays that do get recorded by it. Thanks to the mixing of rays, information that would otherwise be lost manages to reach the camera.

The image from a nonlinear lens would therefore be rich in detail. Unfortunately, it would also be distorted -- and useless for conventional optics. But if the information could be unscrambled, a computer could reconstruct a high-resolution undistorted image of the entire scene. "In such an image all parts of the scene will be 'zoomed in' at the same time," said Fleischer.

Until now, scientists have achieved this unscrambling and reconstruction only in highly constrained settings such as fiber-optic cables. This is partly because cameras and other optical equipment typically don't record full visual information -- they record only color and brightness, the properties that are perceived in everyday experience. Much of the information essential to recovering the finer details of an object or scene is captured by another light property called phase, which measures the time and location of a wave peak. 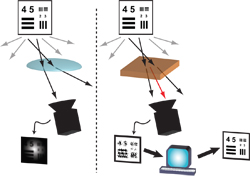 An object illuminated by light reflects rays in many different directions (gray arrows). With a normal lens (shown on left) some rays are captured and refract towards a camera while other rays are missed, resulting in a blurry image with a limited field of view. The new method (shown on right) uses a nonlinear material to let the rays "talk" with each other. The original rays are altered and new rays (shown in red) are generated. The resulting picture in the camera is scrambled, but a computer algorithm can undo the mixing and yield a crisp, wide-field image. (Image: Christopher Barsi)

To capture the visual information given by their nonlinear material, the Princeton researchers used equipment to take a special type of photograph, called a hologram, which records phase. They also combined data from a normal camera. As the first step in processing all this information, they created a simplified model of the flow of light through a nonlinear material. Next they developed a mathematical technique that takes the distorted image and works backward to calculate the visual information at every point in space between the image and the object. This method makes it possible to create high-resolution images at any chosen point -- at the camera, at the location of the object itself, or somewhere in between.

Armed with these techniques, the Princeton team set up its imaging system. The core component, a nonlinear wave mixer, is a rectangular pill-sized crystal of a material called strontium barium niobate. The researchers placed the object to be imaged on one side of the crystal and image-capturing equipment on the other. They tested the system by obtaining images of various objects, including a chart developed by the Air Force that is widely used to calibrate optical devices. In each case the system could image the objects with high resolution. “We were surprised at how well it worked,” said Barsi.

By capturing information that would normally be lost, the new method could greatly enhance the resolution using normal light -- allowing scientists to build microscopes and other devices capable of so-called super-resolution. Conventional methods could attain similar resolution using ultraviolet light or X-rays, which have much smaller wavelengths than visible light, but this type of radiation harms living cells. "The new method could help you see with much better precision, but with a light the cell actually likes," said Fleischer. 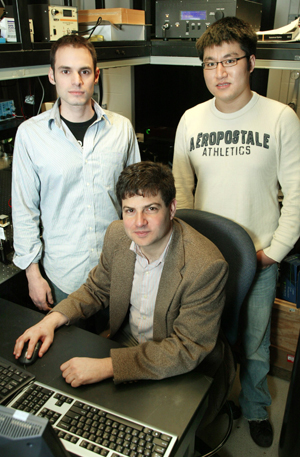 Authors of the research article, which was featured on the cover of the April issue of Nature Phonics, are graduate students Christopher Barsi (standing, from left) and Wenjie Wan and assistant professor Jason Fleischer (seated). (Photo: Frank Wojciechowski)

Another application of the method is in lithography -- etching fine patterns on surfaces -- which is a key step in the manufacture of computer chips, biomedical components and other miniaturized devices. This could be done by burning the target surface with a laser beam shaped by using the new technique in reverse: starting with a wide-field pattern and letting the nonlinear crystal do the zooming.

Another interesting use could be in tomography, a technology often used to get 3-D images of body parts for medical diagnostics. Current methods typically take a number of 2-D images from different viewpoints and assemble them into a 3-D image. In contrast, the new system makes it possible to directly compute the 3-D visual information from images at a single viewpoint, potentially simplifying the setup.

Other potential uses of the new method are in data encryption and in characterizing the optical properties of new nonlinear materials. The method could improve scientists' fundamental understanding of how light behaves when passing through such media. In addition to exploring some of these possibilities, the researchers are working on developing a better nonlinear lens material and improving their reconstruction technique.

This research was supported by the National Science Foundation, the Department of Energy and the Air Force Office of Scientific Research. Barsi was supported by a National Defense Science and Engineering Graduate Fellowship provided by the Army Research Office.