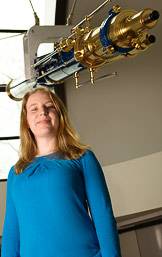 Princeton senior Ragnhild Lunnan is pursuing an interest in astronomy forged during her childhood in Norway. She is seeking answers to questions about mysterious dark energy for her thesis project in astrophysical sciences. Above her in this photo is the University's 110-year-old, nine-inch refracting telescope, restored during recent renovations of Peyton Hall.

From the mountains of Scandinavia, it is easy to fall in love with the night sky.

Since she was a child, senior Ragnhild Lunnan has been interested in astronomy -- scouring the crystalline heavens over her hometown in Norway to study stars that shine like diamonds in the clear alpine nights.

Now, through her senior thesis, Lunnan is delving into one of the biggest mysteries of the universe. Working with Richard Gott, a professor of astrophysical sciences, as her adviser, Lunnan is out to help answer some of the basic questions about an elusive, hypothesized force known as dark energy.

It's an alluring puzzle. Dark energy, as far as scientists can gather, acts like a form of "negative gravity." It is playing a key role in the acceleration of the expansion of the universe. Models, based on data from surveys such as NASA's Wilkinson Microwave Anisotropy Probe, predict that it makes up more than 70 percent of the universe. Its nature is unknown.

Astronomers and astrophysicists here and elsewhere are vitally interested in learning more about this force, and Lunnan is part of Princeton's effort.

"This is demonstrable proof that you can work on forefront matters here as an undergraduate," said Gott.

For Lunnan, the effort has forced her to rapidly learn the difference between normal, demanding coursework and a true research project. "I have always enjoyed my courses but, even with challenging problems, you know that there's a right answer," Lunnan said. "With this, it's really exciting to do something where you are starting with a question and not knowing what the answer will be in the end or even if there is going to be an answer. I really like it."

To begin to understand dark energy, Lunnan has joined a research project that has been embarked upon by Gott in conjunction with colleagues at Princeton and in Korea.

They are using what is known as an "N-body simulation" -- a massive computer program that attempts to recreate the behavior of particles under the influence of physical forces, like gravity. In their case, the program they are using produces a dynamic model of the evolving universe.  Starting from the Big Bang, the explosive beginning of the universe, the simulation moves forward in time, creating structures such as huge accretions of galaxies known as haloes, strings of galaxies called filaments, stars and planets.

The N-body simulation Lunnan has been studying is the world's largest. It uses 70 billion particles moving in a volume that is roughly equivalent to the size of the space occupied by what a person can observe from Earth out to the edge of the visible universe.

Lunnan is particularly interested in special structures known as Luminous Red Galaxies or LRGs, viewed by astronomers as signposts of the warping power of dark energy. About 1.5 million of these galaxies are to be catalogued in the Sloan Digital Sky Survey III, a project being carried out by Princeton in collaboration with other institutions. The project began observations in July 2008 and will continue through 2014.

But before anyone gets to look at telescope data, there's a lot that can be learned through the simulation and by studying objects that resemble LRGs.

Lunnan's work is part of larger efforts among astronomers and astrophysicists at Princeton and elsewhere who are studying the elusive force known as dark energy. Part of that endeavor rests upon using massive computer programs, spurring Lunnan to master calculating techniques to complete her project.

When astronomers made the discovery a decade ago that the expansion of the universe was speeding up, they attributed this acceleration to dark energy, which they hypothesized pervaded otherwise empty space and exerted a repulsive gravitational force. Dark energy could be a cosmological constant proposed by Albert Einstein in 1917 in his theory of general relativity, or it could be a new form of energy whose properties evolve with time.

Distinguishing these possibilities, or determining whether the theory of gravity itself is at fault, requires measuring the history of cosmic expansion with a very high degree of precision, according to Gott. "If we can chart accurately the expansion history of the universe, we can learn more about the nature of the dark energy," he said.

The simulation will provide vital clues.

Clusters of galaxies are connected to other clusters of galaxies by great chains of galaxies, forming a giant cosmic web. As the universe expands, the web expands. Lunnan is picking through these webs by translating reams of computer data. By counting structures in the simulated cosmic web at different distances, researchers can see how much the web has expanded by different epochs. The fewer the structures Lunnan counts, the more the web will have expanded.

"This allows us to chart the expansion history of the universe and measure the properties of the dark energy driving the expansion," she said. "I am learning so much."