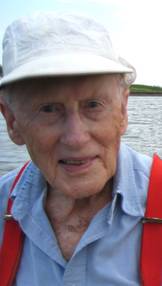 Victor Bruce, a lecturer emeritus in biology at Princeton who conducted advanced studies for more than 25 years on the built-in cycles governing natural rhythms like the sleep-wake cycle, has died. He was 88.

Bruce, who despite a background in engineering became drawn to biological studies, died Friday, May 29, at his home in Princeton after a short struggle with cancer.

"He was an A-1 scientist who did some really neat work," said John Bonner, Princeton's George M. Moffett Professor Emeritus of Biology. "He was a wonderful colleague."

Bruce joined the Department of Biological Sciences in 1956, drawn by the work of Colin Pittendrigh, a noted professor in the department. It was in Pittendrigh's lab that Bruce began his studies into the circadian rhythms of the one-celled Chlamydomonas, a form of green algae that ultimately became a model organism for scientists.

Plants and animals, Bruce knew, have built-in biological clocks that allow them to flower, sleep or wake at the right time. Without signals from the environment, the clocks keep to 24-hour rotations. Bruce wanted to know what controlled these cycles. In close studies of the algae, he found that some strains varied slightly in the length of their phases. As a result, he conducted some breeding experiments that led to his proving that the periods must be subject to genetic control.

"Victor was really the first person to show that there was a genetic basis to circadian rhythms," Bonner said. Circadian rhythms and the genetics of that phenomenon are now a burgeoning area of science. Bruce retired from Princeton in 1982.

Bruce was born in Butte, Mont., on Aug. 10, 1920. His father's career as a mining engineer with the Cyprus Mines Corp. led to assignments that brought the family to Cyprus as well as Colorado and California. The younger Bruce obtained most of his early education in a one-room schoolhouse in Cyprus. Later, he attended the American Community School in Beirut, Lebanon. He went on to earn his undergraduate degree from the California Institute of Technology and then served during World War II as a researcher at the Radiation Laboratory at the Massachusetts Institute of Technology, where scientists were on a quest to develop radar. After the war, he earned his Ph.D. from Stanford University.

While his undergraduate and graduate degrees were in engineering, Bruce conducted his postdoctoral studies at Caltech and the State Serum Institute in Copenhagen in biology. The influence of his brother-in-law, Max Delbruck, was instrumental in shifting his interest. Delbruck, a biophysicist, was central to what became known as the "phage group" at the Biological Laboratory in Cold Spring Harbor, N.Y.

In addition to shifting the course of Bruce's career, Delbruck was responsible for Bruce meeting his wife, Nancy. She was a graduate student at New York University and a technician in Delbruck's lab when Bruce visited there in the early 1950s.

Bruce's eldest son, Peter Bruce, described his father as "a quiet, cerebral sort" and highly organized, and remembered watching his father carefully measure out ingredients as he prepared coffee in a flask over a bunsen burner in his lab. Two of Bruce's three sons, Peter and Andrew, would go on to attend Princeton University.

Besides his wife, Nancy, and sons Peter and Andrew, Bruce also is survived by son James, daughters-in-law Liz, Kathleen and Deborah, and eight grandchildren.

Arrangements are under the direction of the Kimble Funeral Home in Princeton, where online condolences to his family may be sent. A memorial service at the family home in Martha's Vineyard is planned for Saturday, Aug. 15.