Matthew Connor, a rising Princeton junior majoring in operations research and financial engineering, has been awarded a $100,000 grant to expand an initial iPhone application he and his brother developed into a Web-based tool to help diabetics stay healthy. The work also should make it easier for doctors to monitor diabetic patients and for researchers to study treatments for the disease. (Photo: Denise Applewhite)

After watching diabetic friends and family members struggle to keep track of their food consumption, blood sugar and insulin intake, Matthew Connor knew there had to be a better way.

Then it dawned on him: Most people nowadays carry mobile phones.

And more and more those phones are tiny computers that can store information and connect to the Internet.

With that in mind, Connor, a rising Princeton junior majoring in operations research and financial engineering, worked with his brother Michael, a 2007 graduate of Washington University in St. Louis, to develop an iPhone application to help diabetics manage their disease.

Now, Connor has been awarded a $100,000 grant to expand their initial application into a Web-based tool to help diabetics stay healthy, and make it easier for doctors to monitor diabetic patients and for researchers to study treatments for the disease.

"If you don't control diabetes, you run into terrible complications later in life," Connor said. "I thought it would be good to give diabetics a way to make better decisions about managing their condition. It seemed to me that the little application we made did that and that we could take it further."

Connor won second place in the Prize for Primary Healthcare competition from the Center for Integration of Medicine and Innovative Technology (CIMIT), a nonprofit consortium of Boston teaching hospitals and engineering schools that fosters interdisciplinary collaboration to rapidly improve patient care. The prize was made available through the Gelfand Family Charitable Trust, which will support the annual award for five years.

"I was kind of overwhelmed realizing the other finalists were almost all Ph.D. students," he said. "But I felt pretty confident, because what I was doing made sense and fit the criteria of the competition spot on."

Connor was the only undergraduate to win funding in the competition, which sought to support effective medical technologies that rapidly could be put into use. 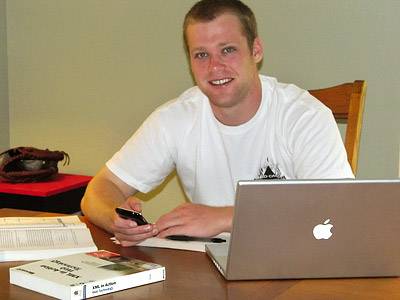 The funding will enable Connor to expand his program, dubbed Islet, to feed the data from the phones to a remote database that can be accessed through the Internet. This will allow Islet users to access their health data from any computer that is connected to the Internet and allow doctors to access the records and use them to help patients manage their diabetes. (Photo: Courtesy of Matthew Connor)

He won for proposing the iAbetics Web 2.0 Diabetes Management System, a website that will interact with the iPhone application he and his brother developed.

"There have been lots of attempts to use technology for diabetes monitoring, such as using PDAs and other devices," said Ronald Newbower, the chief technology officer for CIMIT. "But none of our reviewers for the prize had seen anything that addressed the problem with such a thorough and elegant solution."

The iPhone application is dubbed Islet, a reference to islet cells in the pancreas that produce insulin, a hormone the body requires to convert sugar, starches and other food into energy. In some diabetics (Type I), the islet cells are mistakenly destroyed by the body. In others (Type II), the cells fail to produce enough insulin or the body does not respond normally. In both cases, people with the disease must regulate their own blood sugar levels through diet, exercise and insulin injections.

If not properly managed, the wild fluctuations in blood sugar can result in coma or death and over time can lead to a range of complications, including blindness, kidney disease and nerve damage.

"You can hand write what you eat and your blood sugar numbers," he said. "But that gets pretty difficult if you're on the go, and it's hard to analyze without manually entering your handwritten notes into a computer." 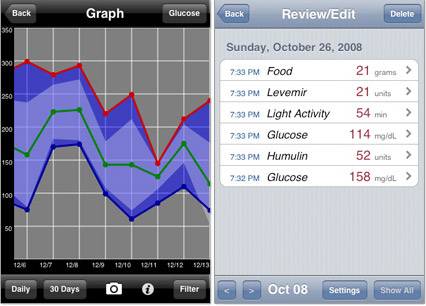 These screen captures from the iPhone show how Connor's application provides an easy-to-use system for diabetics to record what and how much they eat, their insulin injections, blood sugar readings and activity level. The program also graphs these data, so the person can see how each factor affects their blood sugar. (Images: Courtesy of Matthew Connor)

His iPhone application provides an easy-to-use system for diabetics to record what and how much they eat, their insulin injections, blood sugar readings and activity level, he said.

The program also graphs these data, so the person can see how each factor affects their blood sugar -- information that can inform how they manage their disease in the future.

"For instance, maybe you notice that your blood glucose tends to spike in the morning," Connor said. "If you keep good records, you might realize that this happens only after you drink a glass of orange juice at breakfast. Without good records, you may never know what's causing your problem. But if you collect and organize the data correctly, it becomes much easier to analyze what you're doing wrong and what you're doing right."

The first-generation application was made available through the iPhone application store last September, and Connor estimates that it has several thousand regular users worldwide.

Currently the data is stored on the smart phones and can be exported as a generic data file. With the funding from CIMIT, Connor plans to expand the program to feed the data from the phones to a remote database that can be accessed through the Internet. This will allow Islet users to access their health data from any computer that is connected to the Internet and allow doctors to access the records and use them to help patients manage their diabetes.

Connor also hopes the system will provide more thorough records of diabetics' daily routines and blood sugar fluctuations, providing high-quality data for medical research. In developing the new iAbetics system, he plans to build in tools to allow doctors and researchers to access the data in ways that ensure patient privacy.

He intends to use mathematical concepts he has learned as an engineering student to provide statistical tools to analyze the data for important trends and clues to treating and managing diabetes. "A drawback of current applications, including our first-generation product, is that they don't have the ability to track cause and effect very well. Lots of applications monitor blood glucose, but we want to develop better capability to explain why the numbers are where they are."

He hopes to build a trial version of the system by the end of the year and to launch a fully functional version within a year's time. Meanwhile, the Islet is still available through iTunes.

Robert Stengel, a professor of mechanical and aerospace engineering at Princeton who served as faculty adviser for the proposal, helped Connor determine where he would need to recruit outside expertise to build the system. But Stengel emphasized that the idea for the iPhone application and the new online system was Connor's alone.

"He knew exactly what he wanted to do," he said. "He anticipated almost every good idea I had."

Stengel said Connor will be in charge of managing the project. He will have to acquire the expertise to develop the algorithms and programs that underpin the system, and he may hire a staff to help him. "It is unusual and impressive for an undergraduate to be given the opportunity to lead such a significant project," Stengel said. "More typically, the undergraduate is a staff member reporting to a senior manager. But Matt really has it all together. I'm sure he'll succeed."