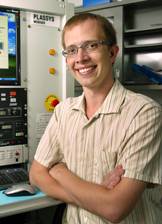 Andrew Houck, an assistant professor of electrical engineering and a past Princeton valedictorian, was named to Technology Review magazine's list of the top 35 young innovators for 2009.

Since 1999, the editors of Technology Review have honored the young innovators whose inventions and research they find most exciting. Today that collection is the TR35, a list of technologists and scientists, all under the age of 35. According to the editors, "Their work -- spanning medicine, computing, communications, electronics, nanotechnology and more -- is changing our world."

The magazine lauded Houck's work on quantum computing, a field in which physicists and engineers hope to develop computers fundamentally different from those that currently exist. In conventional computing, information is broken into a string of 1s and 0s, each of which is called a "bit." Quantum computing uses "qubits," which can also store information as a combination of 0 and 1, known as a "superposition."

"Because of this superposition state, quantum computers may be able to solve certain types of problems in fewer steps," Houck said. "They could solve problems that people thought were unsolvable."

While cautioning that the field is still in its infancy, he said that quantum computers might allow for extremely fast searching of large amounts of data.

They also might be better than current computers at factoring numbers, an ability that could help in deciphering encrypted data, and might help scientists better model complex phenomena, especially those related to quantum physics. This potentially could be helpful in discovering new medicines.

"It is so early, though," Houck said. "Unexpected things will come out of it."

Houck first became interested in quantum computing when he was a Princeton undergraduate majoring in electrical engineering, and he continued to study and conduct research in the field after graduating as the class of 2000 valedictorian.

He went on to earn a Ph.D. from Harvard University and returned to Princeton's engineering school as an assistant professor last fall after completing a postdoctoral fellowship at Yale University.

Earlier this year he was awarded a 2009 Alfred P. Sloan Research Fellowship, which provided $50,000 to fund his work on applying quantum mechanics to the fields of computing and optics.

In the work recognized by Technology Review, Houck figured out a way to extend the lifetime, or "coherence," of information stored in a qubit by protecting it from stray electrons that cause the qubit to lose information to its environment, a decay known as "decoherence."

"One of the big problems in quantum computing is that the qubit discharges information very quickly," he said. "Decoherence is the enemy."

Houck added a capacitor to the qubit, creating a superconducting circuit that operates at temperatures close to absolute zero and limits interference from the stray electrons. He then used photons of light to assess the state of his new type of qubit, extracting its stored information.

The system was able to store information for 5 microseconds, a 10-fold improvement over previous similar qubits that had stored data for no longer than 500 nanoseconds.

"It's a small step toward developing a useful quantum computer," Houck said. "I could put 100 qubits on a chip right now, but it wouldn't do me any good, because the information wouldn't last very long. It's still all very theoretical, and can be maddening, but it's also really promising."