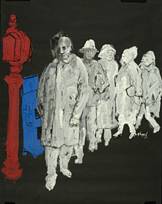 This gouache by George Segal is dated 1980 and depicts an early version or concept for the sculpture "Rush Hour." It is part of the collection of materials from the artist donated to the Princeton University Library by his wife, Helen Segal, and the George and Helen Segal Foundation. The sculpture produced from the painting was altered and finished in 1983. Segal, who lived in New Jersey for most of his adult life, used a box from a state newspaper, The Times of Trenton, in the painting. (© George and Helen Segal Foundation/Licensed by VAGA, New York, N.Y.)

Sixty-eight linear feet of business files, correspondence, preliminary sketches, drawing books, photographs and other materials from the late artist George Segal have been donated to the Princeton University Library.

Segal, a painter and sculptor associated with the Pop Art movement, lived in North Brunswick, N.J., for most of his adult life. The collection was given to the library by his wife, Helen Segal, and the George and Helen Segal Foundation.

"We were very concerned that my father's papers, etc., be preserved and available to the public," said Rena Segal, the couple's daughter, who is vice president of the foundation. "After some research we felt that Princeton was best suited for this purpose. Add that to the fact of it being close by and that Dad had taught at Princeton for a year, we felt this would be the ideal place. Upon meeting with Don [Skemer] and getting a tour of the facilities and being shown how easily the materials could be accessed by computer, we knew we made the right decision."

Skemer, curator of manuscripts in the library's Department of Rare Books and Special Collections, said the Segal collection is significant because of its comprehensiveness and its inclusion of some lesser-known aspects of the artist's work.

"These materials document more than 60 years of George Segal's life, from his early education as an artist until his death in 2000 at age 75," Skemer said. "There were some very pleasant surprises. While George Segal achieved renown as a sculptor, he was also a skilled photographer. His papers contain more than 6,000 black-and-white photographic prints and negatives, chiefly dating from the 1980s and '90s. Many of the photographs were taken to serve as points of reference for sculptural tableaux and paintings or charcoals. But he also was interested in fine photography. With his 35 mm Leica in hand, he captured interesting people and settings from New York City street scenes to the Jersey Shore."

Hal Foster, Princeton's Townsend Martin, Class of 1917, Professor of Art and Archaeology and an expert on modern art, said having the collection available to scholars for research is invaluable. 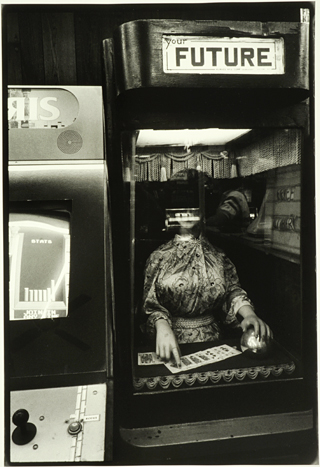 This photograph by Segal, titled "Robot Fortune Teller, Keansburg, New Jersey, 1991," was among 26 prints in "Sequence: New York/New Jersey 1990-1993," an exhibition put on by the Howard Greenburg Gallery in 1994. Scenes from amusement parks, both active and defunct, were a common theme in Segal's photography. (© George and Helen Segal Foundation/Licensed by VAGA, New York, N.Y.)

"George Segal is a very important artist in his own right," Foster said, "having adapted figurative sculpture to everyday settings in a way that allowed the medium to become contemporary again, to speak to a Pop age of alienation as well as entertainment. He also hosted avant-garde gatherings and events, such as some early 'Happenings,' at his New Jersey farm, and this, too, makes his papers and photos a treasure trove for students of postwar art."

Segal, who was born in New York City, attended the Pratt Institute, the Cooper Union and finally New York University, where he received a teaching degree in 1949. He began his working life as a New Jersey poultry farmer in North Brunswick in 1950. He also taught art and English at a local high school and at Rutgers University. He continued to paint, sculpt and exhibit his work and, in 1957, his farm was the setting for the first "Happening" organized by the American painter and performance artist Allan Kaprow. This arts event was a harbinger of the 1960s, during which Segal was part of the Pop Art movement, along with artists such as Roy Lichtenstein and Andy Warhol.

In 1961, Segal learned the technique of sculpting people by applying plaster bandages -- a method with which he became closely identified. He began sculpting individual people, sometimes family and friends, and socially realistic tableaux composed of small groups of freestanding figures. Many of the plaster sculptures were later cast in bronze. From the 1970s to 1990s, Segal was able to devote himself full time to sculpture and painting, with his chicken coops repurposed as his studio. Many of his works were public commissions. 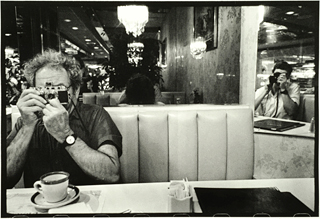 Segal (left) and Donald Lokuta (in reflection) often stopped at diners in the midst of their photographic journeys across New York and New Jersey, and the collection is ripe with similar scenes. Here, they visited the Golden Bell Diner in Freehold, N.J., in 1989. (Photo © Donald Lokuta/Licensed by VAGA, New York, N.Y.)

Segal's works are found in New York City at the Museum of Modern Art, the Whitney Museum of Art and the Guggenheim Museum as well as in many other American and international museums. His "Depression Bread Line" sculpture was commissioned for the Franklin D. Roosevelt Memorial in Washington, D.C. The five figures lined up by a wall represent people waiting for public assistance during the Great Depression. The original sculpture was made in 1991 from plaster, wood, metal and acrylic paint, and then cast in bronze in 1999. The work was intended as a tribute to the president who held office during this era in America's history and whose policies helped move the country out of an economic decline toward prosperity.

Segal donated his "In Memory of May 4, 1970: Kent State-Abraham and Isaac" (1978) to Princeton. The bronze sculpture, located between Firestone Library and the University Chapel, depicts the biblical Abraham poised to sacrifice his son Isaac. It was created by Segal in response to the shooting of anti-war demonstrators by the National Guard on the Kent State University campus during the Vietnam War. 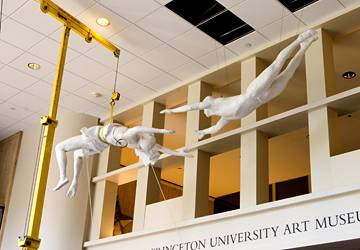 "Circus Acrobats," a 1981 plaster sculpture by Segal, was donated by the Segal Foundation to the Princeton University Art Museum and installed this summer above the museum's entrance. The work features two acrobats swooping gracefully from the ceiling and joins other reliefs and sculptures currently on view at the museum. (Photo: Princeton University, Office of Communications, Denise Applewhite)

More recently, the Segal Foundation donated "Circus Acrobats" (1981) to the Princeton University Art Museum. The plaster sculpture, which features two acrobats swooping gracefully from the ceiling, was installed this summer above the museum's entrance. The piece joins a suite of reliefs and sculptures, including "Woman in a White Wicker Rocker" (1984-85), currently on view in the museum's Modern and Contemporary Art Gallery.

Business records in the Segal papers trace his commissions, traveling exhibitions, permanent installations, critical acclaim, honors and awards, including the National Medal of Arts he received in 1999. The collection includes writings by and about him, audio- and videotape recordings, printed exhibition catalogs, scrapbooks, and other research materials documenting his life and work.

In addition to photographs Segal took, the collection includes shots by Hans Namuth and Donald Lokuta capturing Segal at home and at work in his studio or on location, as well as the installation of his works. Separately from the Segal Foundation gift, Lokuta has donated 380 of his photographs of Segal in the 1980s and '90s. 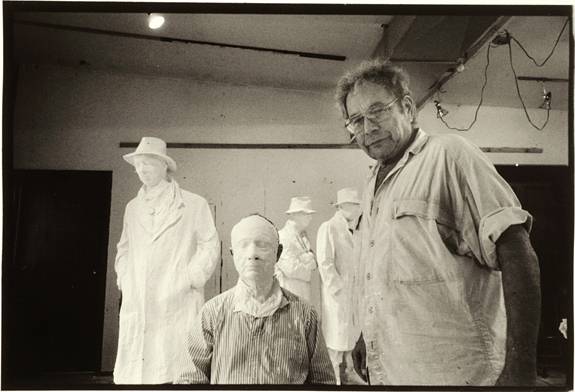 Segal (right) worked here to cast Martin Friedman, then director of the Walker Art Center in Minneapolis, for "Depression Bread Line (1991)," part of the Franklin D. Memorial in Washington, D.C. Other plaster figures in the photo are, from left: photographer Donald Lokuta; Daniel Burger of the Metropolitan Museum of Art; and George Segal. The fifth figure in the sculpture missing from photo is Segal's wife, Helen Segal, who once remarked that the people chosen for this sculpture are the people George Segal wanted "to spend eternity with." (Photo © Donald Lokuta/Licensed by VAGA, New York, N.Y.)

The papers have been organized and described by special collections assistant Valerie Addonizio, with a grant from the New Jersey Historical Commission, and are available for research in the Manuscripts Division of the library's Department of Rare Books and Special Collections. A comprehensive finding aid describing the collection is available online.