Several new sets of wheels — powered by electricity — are hitting Princeton's streets. The University has purchased six electric vehicles to replace gas-powered trucks and vans as part of its sustainability efforts.

The two-passenger vehicles, which are similar to small pickup trucks, are powered entirely by electricity, so they produce no carbon emissions. Known as "neighborhood electric vehicles," they travel at a maximum speed of 25 mph.

Electric cars are much more efficient. They use less energy to travel the same amount of miles as a gas-powered vehicle," said Roger Demareski, the assistant vice president for facilities for plant, who oversees the pilot program. 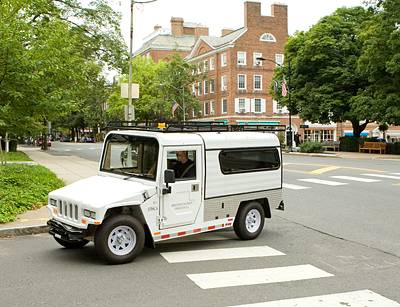 The University's new "neighborhood electric vehicles" provide a cost-effective, sustainable mode of transportation for travel to all parts of campus. (Photo: Denise Applewhite)

The vehicles, purchased from e-ride Industries, are plugged into 220-volt outlets at night. Charging in the evening during nonpeak times is more cost effective and provides access to a greater amount of energy derived from nuclear sources, which is better for the environment than electricity produced from coal and gas, according to Demareski. The vehicles can travel 55 miles on a single charge.

The vehicles, which can carry 900 pounds of equipment, have an enclosed toolbox and a ladder rack for transporting pipes and lumber. They are smaller than comparable gas trucks, so they can travel on most campus pathways and get employees closer to their work sites.

The electric shop, heating, ventilation and air conditioning shop, plumbing shop and control shop, which oversees the systems that control heating and cooling, each have one vehicle. Building Services and the Office of Communications also purchased one vehicle each.

The pilot program is tracking how many miles the vehicles travel a day and how much energy they use. A report at the end of the academic year will compare that data with figures for gas-powered vehicles to track the electric vehicles' effectiveness at reducing energy use.

The University's maintenance fleet currently has 200 gas and diesel vehicles. Demareski said if the pilot program is successful he anticipates increasing the number of electric vehicles in the fleet as part of the department's annual vehicle replacement program.

Another pilot project regarding sustainability and energy use will be launched in the spring. The University will install light-emitting diode (LED) outdoor lighting, which uses much less energy than traditional lights, in parking lot 23 at the south end of Elm Drive. The University worked with Princeton Borough and Township to change ordinances to permit LED lighting for outdoor use.

Autonomous vehicles could be an environmental boon or disaster, depending on public policy