Similarities between webs of terrorists and networks of rescue personnel may seem unlikely. To an eclectic collaboration of engineers and social scientists, the connections are not only possible, but a potential source of deep insights.

A sociologist, a political scientist and two electrical engineers – each a Princeton faculty member with expertise in different types of social and technological networks – have received a grant of $1.1 million from the National Science Foundation to study the relations between these networks. In addition to achieving a stronger theoretical understanding, the researchers want to develop practical strategies for applying the knowledge in combating terrorism, improving emergency response and tapping collective wisdom.

"It's a very challenging set of problems because there is so much we don't understand about how people act in social networks," said Mung Chiang, associate professor of electrical engineering. "How can we extend our mathematical understanding from technological networks to social interactions?"

Chiang is collaborating with fellow electrical engineer H. Vincent Poor, sociologist Matthew Salganik and political scientist Jacob Shapiro. Salganik and Shapiro bring a particular understanding of social networks that has been missing from much of the formal network theory research, Chiang said.

Chiang and Poor, who also is dean of the School of Engineering and Applied Science, are leaders in studying the structure and dynamics of digital and wireless communications networks, such as cell phone networks and the Internet. The field of "network science" has advanced rapidly in recent decades as researchers have discovered fundamental mathematical properties that are common to many types of networks.

The next step is to understand how these structural properties affect the functional activities that networks enable, such as the social networks that support terrorism or the way that the Internet services Facebook and Twitter contribute to dissident movements in Iran.

"Social scientists use a modeling approach that is not that different from that of engineers," said Chiang. "But there's a vast difference in how we present the information in each field's own jargon. On the surface there is a huge gap across the disciplines, which is what we are very interested in bridging." 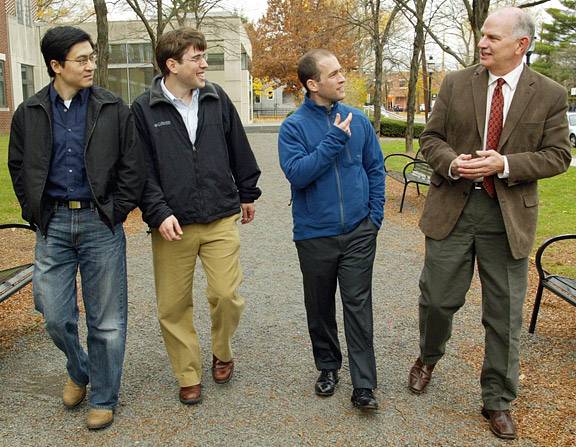 Electrical engineer Mung Chiang (from left), sociologist Matthew Salganik, political scientist Jacob Shapiro and electrical engineer H. Vincent Poor received a $1.1 million grant from the National Science Foundation to fund their research on technological and social networks. Their goal is to better understand the interplay between the two and to apply their knowledge in combating terrorism, tapping the collective wisdom of groups and other practical problems related to networks. (Photo: Frank Wojciechowski)

Salganik, an assistant professor of sociology, said the collaboration could aid his research on networks-based sampling, in which he uses social networks to survey hard-to-reach populations such as intravenous drug users and sex workers, two groups that influence the spread of HIV/AIDS. Instead of going out and finding all the people to survey, he recruits a few people who use their networks to recruit others who in turn recruit even more people.  By relying on the network of relationships within the population, he is able to reach a larger and more representative sampling.

The only way to really understand the opportunities and limitations of such respondent-driven techniques is to know something about the structure of the underlying networks, Salganik said. In a study of sex workers in Belgrade, the results from street-based and brothel-based women were very different because their networks were different.

"There's a coupling between the processes happening on the network and the network itself," he said.

Shapiro also is interested in understanding this coupling for his research on the organizational aspects of terrorism and homeland security. In one area of his work, Shapiro studies bureaucracy in terrorist organizations and their vulnerabilities in terms of raising money, recruiting members and effecting violence. On the other end of the scale, the difference between the New Orleans police department that collapsed during Hurricane Katrina and the outlying departments that continued to function had a lot to do with the way police officers are connected with one another, both technologically and personally, Shapiro said.

"These networks do have a lot in common," said Shapiro, an assistant professor of politics and international affairs. "One of the things we've been working on for a while is understanding what the commonalities are."

"We want to know how different structures within groups affect their ability to perform specific kinds of tasks," he said. That is where the newly funded collaboration will be useful. "The opportunity to bounce ideas off network scientists from different fields and see how I can apply their insights to very concrete organizations is very exciting to me."

Poor's interest in the connections between social and technological networks began in the fall of 2004 when he taught a freshman seminar on "small-world networks." Several of his students wrote term papers on the then-new phenomenon of FaceBook. "Facebook has since become a paradigm of how social and technological networks affect one another," Poor said. "The subject is rich and evolving rapidly before our eyes."

The collaboration itself arose from a confluence of networks. It began on July 13, 2008, when Poor, Chiang and their postdoctoral associate Hazer Inaltekin were exchanging e-mails about a paper they were preparing and Chiang asked Poor to suggest potential collaborators who study the social aspects of networks. Poor had noticed a feature article on the University home page about Salganik and sent the link to Chiang. Within a few hours, Chiang had e-mailed Salganik who was immediately interested.

Once Salganik was involved, a different kind of trail led to Shapiro. The two happened to be neighbors, and their wives happened to be old college friends. A casual conversation at home led Salganik's wife, Amanda, to suggest Shapiro as a collaborator.

The serendipitous quality of the connections reflects the kind of insights the researchers hope will arise.

"People who have been thinking about the same thing in different ways can often come together and find things that are unpredictable and very helpful," said Salganik. "After getting together and working through these problems, I am confident something very interesting will emerge. I'm just not sure what it will be, and that's why I'm so excited about this project."