Taking a close look at the Everglades restoration

A dozen Princeton students traveled to the Florida Everglades over spring break to learn more about efforts to save the area's endangered ecosystem. The students' hands-on research is a key part of the freshman seminar "The Everglades Today and Tomorrow: Global Change and the Impact of Human Activities on the Biosphere." Above, Christina Campodonico collects water samples from a stormwater treatment area, where water coming from agricultural and urban areas is cleaned before being released into the Everglades ecosystem. (Photo: Nick McAfee)

A dozen Princeton students traveled to the Florida Everglades over spring break to learn more about efforts to save the area's endangered ecosystem. The students' hands-on research is a key part of the freshman seminar "The Everglades Today and Tomorrow: Global Change and the Impact of Human Activities on the Biosphere." Above, Christina Campodonico collects water samples from a stormwater treatment area, where water coming from agricultural and urban areas is cleaned before being released into the Everglades ecosystem. 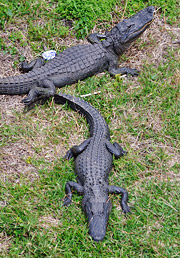 Freshman Mark Pavlyukovskyy said that "seeing the 'swarms' of alligators and birds that are characteristic of the Everglades proved that what I was studying was truly relevant and important." (Photo: Nick McAfee)

Freshman Sarah Bluher spent part of her spring break in the Florida Everglades collecting field samples from an airboat in a water conservation area.

"From the boat, you could see a panoramic view of the 'river of grass,' and when they stopped the engine you could feel the silence of the landscape," she said.

Bluher and 11 of her classmates conducted hands-on research activities during the weeklong trip in March to learn about efforts to save the endangered ecosystem. The work was a key component of their freshman seminar "The Everglades Today and Tomorrow: Global Change and the Impact of Human Activities on the Biosphere," in which students are exploring aspects of pollution and climate change in the Everglades.

Through class discussions, fieldwork and laboratory exercises, the seminar provides students with the scientific tools to analyze the environmental damage to the Everglades and to assess the progress of efforts to restore the area's ecosystem.

The course also provides background on the historical and political elements of the multibillion-dollar Everglades restoration project, which has been described as the biggest and most complex endeavor of its kind in the world. More than 60 years ago, U.S. government efforts to reroute the flow of water in southern Florida paved the way for development and industry to flourish, but devastated the Everglades' plant and animal life. For the past decade, the federal and state governments have funded a $7.8 billion plan to revitalize the area's ecosystem, including restoring natural flows of water, improving water quality and providing flood protection. 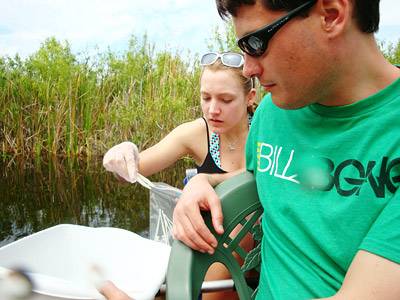 "We use the Everglades as an example of what happens when humans use their technological power to maximize the use of an originally 'hostile' ecosystem," said Anne Morel-Kraepiel, a lecturer in the Department of Chemistry, who leads the seminar along with Satish Myneni, an associate professor of geosciences. "The Everglades are also a place where science, environmental conservation, policy and politics are closely intertwined. They are a remarkable system through which we can engage students who want to major in the humanities as well as those who want to become scientists."

In the first half of the semester, class discussions focused on relevant scientific concepts such as global warming, ocean acidification and wetlands biogeochemistry. Students became familiar with the instruments they would need in the Everglades to collect water, sediment and plant samples, as well as the laboratory equipment they would use to analyze the data from their fieldwork. They also read "The Swamp," an ecological history of South Florida by journalist Michael Grunwald. 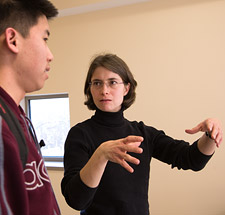 Instructor Anne Morel-Kraepiel (right) discusses the student-designed group projects with freshman Hanfu (Kevin) Chai on campus in preparation for the trip. Kraepiel and her faculty colleagues have designed the seminar to give students "an introduction into what a research project would be." (Photo: Brian Wilson)

In preparation for the spring break trip, the students broke into three groups to design their own research projects: exploring links between metal concentration in tree rings and changes in sea level or temperature; analyzing mercury levels in the food chain; and studying the concentration of nutrients in sediment and plants.

"We wanted these projects to be something that they design themselves," Kraepiel said. "We have to guide them because they don't have a whole lot of experience, but ideally this is an introduction into what a research project would be."

On the research trip, the students collected field samples, toured wetland and refuge areas, explored the area on canoeing and biking trips, and met with Carol Mitchell, deputy director of the South Florida Natural Resources Center, to learn more about the restoration project.

"This was the place I had read and studied about for the last six weeks, so finally seeing the 'swarms' of alligators and birds that are characteristic of the Everglades proved that what I was studying was truly relevant and important," freshman Mark Pavlyukovskyy said after returning to campus. "By the end of the Everglades trip I felt like I had a good understanding of the interactions between the political and scientific aspects of the Everglades restoration project, and could even make my own recommendations for future progress."

Bluher said collecting samples from the airboat was a highlight of the trip. "I had an especially good time collecting sediment samples, because you really had to get dirty and dig through the muck," she said.

Back in Princeton, the students are in the lab analyzing data collected in the Everglades and preparing final oral and written presentations for their group projects. In addition to Kraepiel and Myneni, the students are working on their projects with Frank Black, a postdoctoral researcher in the Department of Geosciences, with contributions from geosciences professors Bess Ward and François Morel. The class, which was offered for the first time last year, is the Richard L. Smith '70 Freshman Seminar.

"The trip has brought a new energy to the group, and now that we all know each other better, I think we can become a better team as we analyze the data," Bluher said. 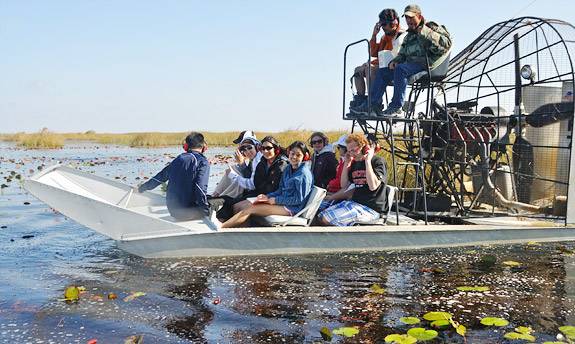 Students visit a water conservation area to collect field samples to bring back to Princeton for analysis. The students have designed group projects focused on examining levels of pollution and climate change in the Everglades. (Photo: Nick McAfee)

'The Science of Mythbusters': A freshman seminar