Kenneth Liew focused his senior thesis on an assessment of Streicker Bridge that brought together concepts from architecture, sociology and engineering. Liew, a civil and environmental engineering major who also is pursuing a certificate in the Program in Architecture and Engineering, explored whether the new pedestrian walkway arching across Washington Road succeeds both as a work of art and as a functional structure.

For his senior thesis project, Kenneth Liew found a bridge that connects his interests in art and engineering.

Combining concepts from architecture, sociology and engineering, Liew assessed whether Streicker Bridge, the new pedestrian walkway arching across Washington Road that will open in the fall, succeeds both as a work of art and as a functional structure.

His approach included working with his thesis adviser, Branko Glišic, an assistant professor of civil and environmental engineering, to use cutting-edge sensors to monitor the structural health of the bridge the way a doctor might measure heart rate or blood pressure to assess a patient.

"The bridge is an important piece of structural art, and we can use structural health monitoring to ensure its long-term existence on campus," said Liew, a civil and environmental engineering major who also is pursuing a certificate in the Program in Architecture and Engineering.

Liew was intrigued when he learned that Streicker Bridge was designed by Christian Menn, an influential Swiss bridge engineer whose work Liew had studied under David Billington, an emeritus Princeton engineering professor. Menn's bridges blend artistic flair with innovative concrete engineering to assure structural integrity, prompting Billington to label him a "structural artist." 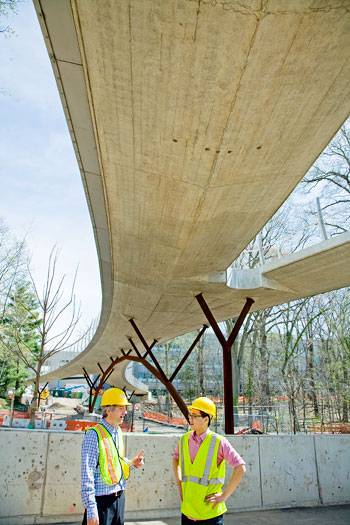 Liew's thesis stemmed from a project led by his adviser, Branko Glišic (left), an assistant professor of civil and environmental engineering, to monitor the structural health of the new pedestrian bridge.

Liew, who grew up New York City, one of the world capitals of artful structures, has long been fascinated by the nexus of aesthetics and function. "As a kid I always liked to build with Legos and work with my hands," Liew said. "I wanted to do something creative in my career. So engineering and architecture seemed like the perfect combination."

For his thesis, Liew explored the social importance of the bridge, including its functional and symbolic role connecting various scientific disciplines on campus. The bridge will link Icahn Laboratory, which houses the Lewis-Sigler Institute for Integrative Genomics, and the new Neuroscience and Psychology Buildings, all situated on the west side of Washington Road, with the new Chemistry Building and Jadwin Hall, home of the Department of Physics, on the east side.

"The bridge's design, a single span in the middle that splits in two on either end, symbolizes this connection," Liew said. "But it's a difficult shape to engineer."

To monitor the structural health of the bridge as it settles and ages, Glišic oversaw the installation of special sensors in the bridge as it was being constructed. The sensors measure temperature, strain and vibration in the concrete, allowing engineers to determine if the bridge is behaving as expected from its design.

Interest in such techniques has grown in response to recent unexpected failures of large structures, such as the 2007 collapse of the Interstate-35W bridge spanning the Mississippi River in Minneapolis, which have raised concerns about the safety of aging U.S. infrastructure.

"I decided to use Streicker Bridge as a laboratory for structural health monitoring," Glišic said. "It was a great opportunity, since we have limited places where we can place sensors on older bridges. In this case we will have data that give us a view into the entire history and lifespan of the bridge."

The senior thesis: Quintessentially Princeton The capstone of Princeton students' academic journey is the senior thesis, an independent work that requires seniors to pursue original research and scholarship under the guidance of faculty advisers. Research topics are inspired by learning experiences in and out of the classroom -- on campus or around the world. Known as a quintessential part of the Princeton experience, the senior thesis encourages students to develop as independent thinkers by tackling a rigorous intellectual challenge. This is part of a series of profiles of four students who have met that challenge in the areas of public and international affairs, psychology, English, and civil and environmental engineering. Other stories:

The bridge is outfitted with some 100 point sensors, together capable of taking about 25,000 measurements per second. Also running through the concrete is a 122-foot-long, cable-like sensor that takes measurements at 800 additional points. This allows the engineers to collect large amounts of data and compare the actual performance of the bridge with computer simulations of how it is supposed to behave. "The sensors serve as a kind of nervous system for the structure," Glišic said. "They tell you when something is wrong."

Although the sensors measure a range of parameters, Liew's project has focused on tracking the changes in strain and temperature in the concrete to see if they match with the predictions of the designers. Daily and seasonal temperature changes cause bridges to alter shape, potentially stressing the structure in surprising ways. "Structures move a lot more than people think they do," Glišic said. "A car bridge, for instance, moves far more from daily temperature changes than from the weight of the vehicles."

Liew combined his preliminary physical assessment based on the sensor data with his study of the economic, social and artistic values of the structure, and used these criteria to measure Streicker against similar bridges. "Compared with other bridges, its cost is warranted based on its functional and social value," he said. "But it's also exceptionally elegant."

Liew said his interest in the design of objects that people put to practical daily use has extended to an interest in furniture, which, like well-designed buildings and bridges, can merge structural soundness and elegance. With graduation approaching, he is applying to work for product-design firms where he can continue to mesh art and engineering.

"I came away from my thesis with a better appreciation of structures in general," he said. "A lot more goes into them than I'd expected."

Glišic oversaw the installation of special sensors in Streicker Bridge as it was being constructed. Liew said, "The bridge is an important piece of structural art, and we can use structural health monitoring to ensure its long-term existence on campus."