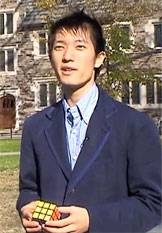 In this video profile, Shotaro ("Macky") Makisumi is shown realizing his dream of hosting a world-class Rubik’s Cube competition on Princeton’s campus. Makisumi is a member of the class of 2012 and founding president of the Princeton Cube Club.

By the time he was 15 years old, Shotaro ("Macky") Makisumi held seven world records in speed cubing, or solving Rubik's Cube puzzles as quickly as possible. Makisumi, a math major and member of the Princeton class of 2012, introduced his passion for speed cubing to campus and founded the Princeton Cube Club student organization in 2009.

This video profile followed Makisumi as he realized a second dream, hosting a World Cube Association-sanctioned competition at the University in November. With its first international competition under its belts, the club already has set the date for its next tournament for Sept. 24, 2011, in Princeton's Richardson Auditorium.

"I think creating a student organization here has really helped me to get this idea that I had to come true," Makisumi said about organizing the competition.

Princeton recognizes some 300 undergraduate student organizations, which range from social action initiatives to performing arts groups, and from pre-professional clubs to cultural and social affinity groups. The Office of the Dean of Undergraduate Students provides support for these groups that include those established more than a century ago -- with long-standing traditions -- to newly formed associations that are hoping to make their own marks on the Princeton social landscape.