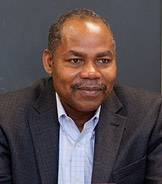 Princeton Politics Professor Leonard Wantchekon has built upon his past as a political activist in the West African nation of Benin to forge an academic career focused on studying — and working to shape — governance and institutions in Africa. He is also working to establish a graduate school and center for social-science research in Benin.

Princeton University Politics Professor Leonard Wantchekon's education began as a young child in his home village of Zagnanado, in the West African nation of Benin, where elementary school classes gave way to long soccer games and evenings of storytelling by aunts and uncles whose tales became informal history courses.

He left village life behind in a search for academic success that took him to the nation's most populous city, Cotonou, and eventually to the National University of Benin to study mathematics.

Along the way, Wantchekon became a pro-democracy activist. For years at a time, planning meetings became his classes, fellow activists his classmates and acts of protest his final exams. Through the 1970s and '80s he rose to a prominent place in the opposition that helped hasten the end of the oppressive regime of Mathieu Kérékou.

"All the time I tried to be two different persons in one," Wantchekon said. "On the one hand I wanted to be the next big thing in academics in Africa. I wanted to be a top mathematician and was very ambitious, driven and enthusiastic. … At the same time, I was an equally ambitious pro-democracy activist. I was at the center of a social movement that was pushing for major political reforms in Benin." 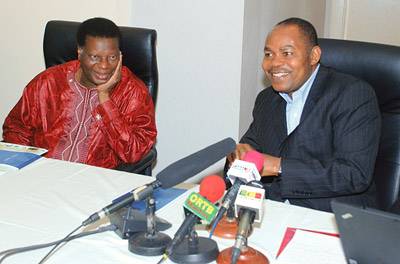 Wantchekon, pictured with journalist Jerome Carlos, spoke at a 2010 conference in Benin titled "Culture of Mistrust and Development Challenges in Africa." His lecture was based on his American Economic Review article "The Slave Trade and the Origins of Mistrust in Africa." (Photo by Serge Acacha)

His twin paths of academic study and political activism frequently diverged and intersected until a morning in December 1986, when he escaped across the border into Nigeria following 18 months of incarceration as a political prisoner and three months on the run from authorities.

"It was  — or rather, I was determined to make this — the dividing line between my past and my future," Wantchekon wrote about that moment in his autobiography "Dreaming Against the Grain," which was released in French in June.

A quarter-century after leaving his home country, Wantchekon has built upon his remarkable past to forge an academic career focused on studying — and working to shape — governance and institutions in Africa. And he's hard at work on his most ambitious project, establishing a graduate school and center for social-science research in his home nation.

"I'm so grateful to be here. Being in the U.S. immensely transformed my professional and personal life," said Wantchekon, who joined the Princeton faculty in fall 2011 as a professor of politics and associate faculty member in the economics department. "At the same time, I think we shouldn't underestimate how crucial it is that ideas that will help Africa develop have to come mostly from Africa and have to involve more Africans. This, of course, cannot happen overnight.  So we need to set up great institutions of higher education with the hope that, over time, we develop enough talent to make a difference." 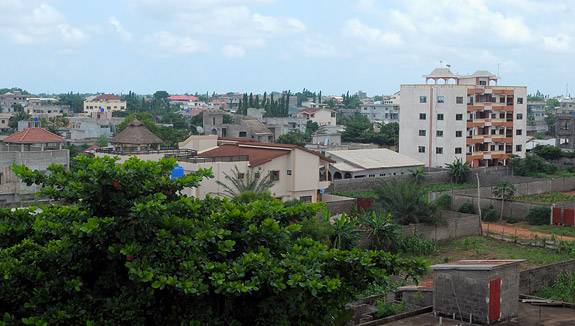 Wantchekon is working to establish the African School of Economics (ASE), whose offices and a related organization, the Institute for Empirical Research in Political Economy, are currently housed in the building at right in Abomey Calavi, Benin. Plans for a new ASE campus are under way. (Photo by Serge Boya)

In his first year on the University's faculty after stints at Yale University and New York University, Wantchekon has moved quickly to establish himself as a teacher, researcher and resource for students.

He teaches an undergraduate course on African politics and a graduate class on patronage and machine politics. Wantchekon also works with undergraduate and graduate students on a wide range of research projects.

"He encouraged me to follow my instincts and delve into a rather unusual topic: the intersection of politics and music," said Francesca McNeeley, who graduated in June with a degree in politics and certificates in music performance and African studies. "But it was a topic that I felt very strongly about, so it was wonderful to find an adviser who was even more excited about it than I was."

McNeeley's senior thesis examined the manipulation of the popular music industry in the Congos in the 1960s.

"It was a fascinating topic to get to research, though incredibly difficult to conduct critical research on. I don't know if I would have had the courage to pursue this topic without Professor Wantchekon's constant support and enthusiasm," McNeeley said.

Wantchekon said McNeeley's research has sparked his own interest in the subject.

"I did help her, but she also inspired me," he said. "I became very interested in this topic. Recently, I have been trying to use culture and popular music as a way to explain social values." 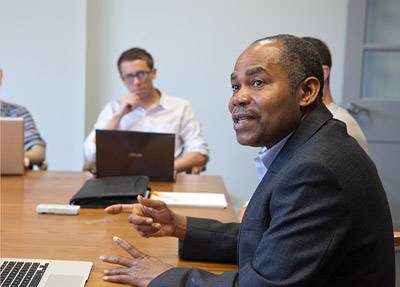 Peter Buisseret, a fourth-year Ph.D. student whose academic interests center on comparative politics, has enlisted Wantchekon as one of his dissertation advisers and is co-writing an academic paper with him. The paper proposes theories on how competitive nomination procedures in political parties could induce candidates to develop expertise on substantive policy areas.

"Leonard is enormously enthusiastic about the projects we work on together, and also my own work," Buisseret said. "As a co-author, he is truly collaborative: despite his senior academic status, I feel very much an equal in the projects we work on, but at the same time I recognize how much intellectual and professional benefit I get from working with someone with his experience and knowledge."

Wantchekon said his experience in graduate school shapes the way he relates to students. After fleeing Benin, he found his way to Canada, where he earned a master's degree in economics from Laval University and the University of British Columbia.

In 1992, he then went to Northwestern University, where he earned his doctorate in economics. But the transition to the American academic system — and an environment where only English was spoken — was difficult. He overcame the challenges, though, and secured a position as an assistant professor of political science at Yale.

"My experience at Northwestern really helped me to deal with graduate students," Wantchekon said. "When I see a student who is struggling to adapt to graduate school, it reminds me of my own experience."

Focusing on his home continent

Wantchekon pursues research on a range of topics relevant to Africa. This summer he is looking at the long-term impact of settlements such as religious missions and commercial posts on economic and political outcomes in Africa. He is also researching how a nation's founding — whether through rural rebellion or a urban social movement — affects its long-term stability.

He is compiling a book on a series of three experiments he conducted in Benin with the cooperation of the nation's political parties that evaluated the effectiveness of campaign techniques. In one, candidates used town-hall meetings that focused on issues in the place of more traditional — and more costly — rallies that emphasized financial incentives for voters. Town-hall meetings, he found, can match the rallies in effectiveness. A similar experiment is planned in the Philippines, Wantchekon said.

"As a researcher and someone who has political experience, I'm interested in the following question: How can a candidate best communicate a policy platform to the electorate that is both good for the country and can help the candidate win?" Wantchekon said.

But Wantchekon isn't just studying Africa's past and present. He's working to shape its future as founder of the African School of Economics (ASE), which is set to open in Benin in 2014. The goal of the ASE, Wantchekon said, is to create a center of excellence for social-science research in Africa. The school, which has its roots in a research institute Wantchekon established in Benin in 2004, is scheduled to open with about 300 master's degree students.

The ASE will bring together students and faculty from Africa and beyond with an academic focus on informing social science within the context and history of Africa. Classes will be taught in English.The school's structure and curriculum have been established. The design of the school, to be based near Cotonou in Akassato, is almost complete. Fundraising is under way, and Wantchekon led a panel discussion on the ASE at the World Bank in Washington in June that drew a range of potential funders.

The ASE is also pursuing academic partnerships with universities around the world that he hopes will lead to a free flow of students, faculty and ideas. Talks are under way on an agreement between the ASE and Princeton.

A memorandum of understanding between the ASE and Princeton will be broad and leave open the possibilities of shared research, work by Princeton faculty at the ASE and student exchanges, said Diana Davies, vice provost for international initiatives.

"One of the things the University is very excited about in terms of this initiative is the opportunity our faculty will have to collaborate with scholars in Western Africa and possibly in other countries in sub-Saharan Africa later," Davies said. "Also, this allows us to engage in the activity of capacity building and helping to build up the next generation of scholars in Africa, which is something that's very important to us."

The discussions with the ASE come as Princeton puts a greater focus on efforts involving Africa, which already include a site for the Bridge Year Program in Senegal, a program in Kenya involving the Department of Ecology and Evolutionary Biology, and research projects by faculty members.

Jeremy Adelman, Princeton's Walter Samuel Carpenter III Professor in Spanish Civilization and Culture, professor of history and director of the University's Council for International Teaching and Research, said the council plans to turn its attention next year to developing an institutional plan for the University's African partnerships.

"Africa is part of the University's larger internationalization effort," Adelman said. "But the strategy has to be adapted to Africa. Figuring out how it's going to work in Africa requires working with Africans."

Wantchekon knows that much work remains to reach his goals for the ASE.

"I am really determined to get there," he said. "ASE enables me to nourish big ambitions and dreams for Africa while being among the best academics in America."