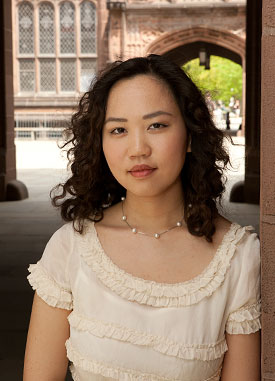 Veronica Shi, the salutatorian for Princeton's class of 2011, has immersed herself in the study of classics since her introduction to Latin and Greek as a freshman. She will continue the tradition of giving a speech in Latin at Commencement. (Photo by Denise Applewhite)

Princeton senior Veronica Shi is the daughter of two physics professors, and she grew up listening to them extol the importance of studying science and math. But Shi harbored a different passion: She loved literature.

"I've always loved to read," said Shi, who in high school was especially fond of 19th-century American and British writers.

Once she arrived at Princeton, the aspiring English major found herself drawn not to Emily Dickinson and Jane Austen, but to Homer and Virgil. Though she knew no Latin or Greek when she arrived at the University, Shi immersed herself in both subjects and became an exceptional student of classics.

Shi's success as a classics major led to her being named salutatorian for the class of 2011. She will continue the Princeton tradition of delivering a speech in Latin at Commencement on Tuesday, May 31.

Shi learned Latin and Greek her freshman year, taking intensive courses that squeeze a year's worth of language instruction into 12 weeks. During the summer after her freshman year, she studied one-on-one with Denis Feeney, the Giger Professor of Latin and a professor of classics, so that she could enroll in a 300-level course on Virgil's "Aeneid" the following semester. Feeney was astonished by her performance in the class, awarding her the first A+ he had ever given in a 200- or 300-level Latin course.

"Her fingertip feel for how good Latinists do things would be commendable in a graduate student; in a sophomore who had known no Latin eight months before the course, it was, quite simply, utterly staggering," Feeney said.

Shi went on to impress her professors with her accomplishments in several challenging graduate seminars in classics and with her 207-page thesis, which traces how Greek and Latin epic poetry became a political genre. It was "a stunning performance, by some distance the best thesis I have advised or read," Feeney said.

A 'phenomenon' in the classroom

A native of West Covina, Calif., Shi stands seventh in the senior class after seven terms, and has won a number of academic prizes. She won the 2011 Daniel M. Sachs Class of 1960 Scholarship, one of the highest honors given to Princeton undergraduates. She also twice received the Shapiro Prize for Academic Excellence, was elected to Phi Beta Kappa, and in 2010 was, along with this year's valedictorian, John Pardon, the co-winner of the Class of 1939 Princeton Scholar Award, given to the undergraduate who, at the end of the junior year, has achieved the highest academic standing for all preceding college work at the University.

Professor of Classics Joshua Katz said Shi "is widely regarded as a phenomenon by professors and peers alike." He noted "her tenacity and organizational skills; her unusual ability to focus on details while also having grand ideas about the big picture; and above all, the speed with which she learns -- really learns -- languages." He also praised her fluency "about anything from the manuscript tradition of Virgil to the grave problems with college accreditation, and from the Hieroglyphic Luvian writing system to the joys of Chopin."

Shi also has been active at Princeton outside the classroom. She is a student member of the Faculty Committee on the Course of Study, as well as a member of the Undergraduate Student Government's Academics Committee and the Behrman Undergraduate Society of Fellows. Last fall she served as one of two undergraduate students on the search committee for the new dean of the college. She also has served as a peer adviser in Butler and Mathey colleges.

Next year, Shi will use her Sachs Scholarship to pursue a master's degree in Greek and Latin languages and literature at Worcester College at the University of Oxford. She plans to pursue an academic career of teaching and, in addition, carve out a role as an advocate on behalf of classics and the humanities in American higher education.

It was a course at the Woodrow Wilson School of Public and International Affairs on higher education policy, taught by Associate Professor of Psychology and Public Affairs Daniel Oppenheimer, that prompted Shi to consider the role of promoting the study of classics.

"It got me thinking about the larger question of articulating the importance of the humanities," Shi said. "I came to feel that being a responsible scholar of the classics involves knowing how to express to the public at large why this discipline, even though seemingly very rarified, is worth studying and making accessible to a wider audience."

For Shi, part of the potency of classics is its endurance.

"Homer is almost 3,000 years old, and even today, we can still read and appreciate his poetry in the original language," Shi said. "This ability to bridge a huge divide of culture and time is what really makes classics magical."

Shi worked to bring that magic to the Princeton community earlier this year when she crafted a libretto in classical Latin for an original opera created by students called "Nero Artifex." Watching the students onstage singing an entire opera in Latin was "remarkable," Shi said.

"I hoped it would be a powerful argument for the idea that Latin isn't a dead language," she said. "Bringing the language to life and letting people hear it shows that it's not mysterious and arcane, but something really beautiful."

The same may be said of the salutatorian speech on which Shi is working. "I hope to have fun with it and do something different," she said. "What I'm planning will be a treat to those who know Latin."

Among those at Commencement listening to the speech will be Shi's parents, who were initially less than thrilled with her choice to study classics. But many conversations about her studies -- and a birthday present to her mother of Marcus Aurelius' "Meditations," which Shi had read during her freshman year in a course on humanistic studies -- won them over.

"They were actually humanists at heart," Shi said.