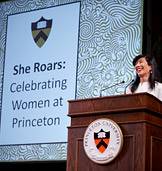 Andrea Jung, a 1979 Princeton graduate and chairman and CEO of Avon Products, Inc., shares inspiring moments and philosophies with participants in the "She Roars: Celebrating Women at Princeton" conference. The event drew nearly 1,300 Princeton alumnae and their guests to campus this spring.

Nearly 1,300 Princeton University alumnae and their guests gathered on campus for a weekend of stimulating conversations, thought-provoking lectures and emotional connections during the "She Roars: Celebrating Women at Princeton" conference, April 28 to May 1. The "She Roars: Conference Highlights" video captures some of the excitement of the event, including remarks from keynote speakers and photos. 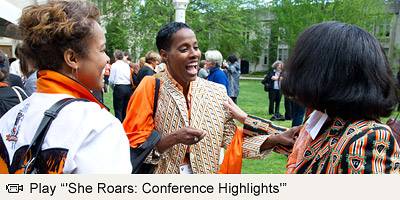 "She Roars" participants reunite with one another during a break in the whirlwind weekend conference. Watch highlights from the event in this video.

"She Roars" keynote speakers included Princeton alumnae: U.S. Supreme Court Justice Sonia Sotomayor, a class of 1976 graduate; Lisa Jackson, a member of the graduate class of 1986 and head of the U.S. Environmental Protection Agency; Andrea Jung, a class of 1979 graduate and chairman and CEO of Avon Products, Inc.; and Wendy Kopp, a class of 1989 graduate and CEO and founder of Teach for America.

In issuing an invitation to the conference, President Shirley M. Tilghman said, "It has been 50 years since Princeton admitted its first female degree candidate, a graduate student in the Department of Oriental Studies, followed by the introduction of undergraduate coeducation in 1969. Together, these events paved the way for the inclusive institution that we know today." 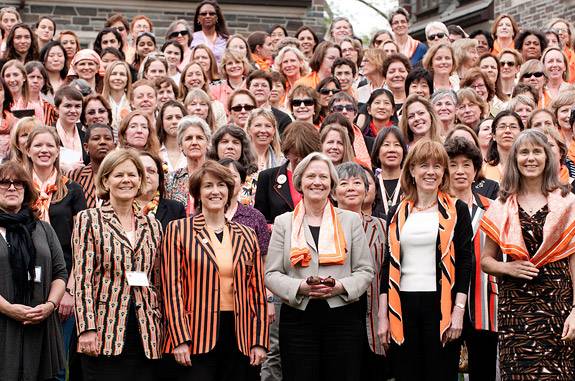 Hundreds of Princeton alumnae gather outside of the Whitman College residential complex to take a group photo during the historic "She Roars" conference.