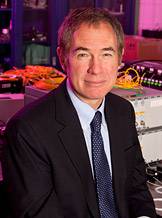 Paul Prucnal, a Princeton professor of electrical engineering, is leading a collaboration between researchers at the University and Lockheed Martin, the aerospace and defense technology corporation, to develop a "photonic neuron," a device that uses fiber-optic circuits that transmit information a billion times faster than a human neuron.

The name of the project -- "photonic neuron" -- was catchy enough, but what really caught Mitchell Nahmias' attention was the opportunity to combine his interests in engineering and neuroscience.

Nahmias became one of seven Princeton undergraduate students to participate in a research collaboration between the University and Lockheed Martin, the aerospace and defense technology corporation, to produce fiber-optic-based computational devices that work similarly to neurons, but are a billion times faster.

"I'm an electrical engineering major, but I really like biology and cognitive science," said Nahmias, a member of the class of 2012. "This is a cool project, a really interesting confluence of a bunch of fields."

If the project is successful, the new technology could allow for computer circuits that are capable of making nearly instantaneous calculations in life-or-death situations, such as locating a terrorist from a radio signal or deciding whether to eject a fighter pilot from a jet. It might also allow speedy processing of huge amounts of data, such as the video signals that currently guide the movements of robotic cars or scans of genetic data for clues to fighting diseases. 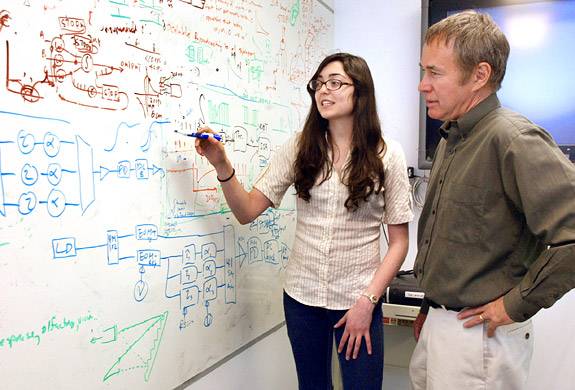 Prucnal meets with the students on the research team every week to share developments on the project and brainstorm new ideas on the laboratory whiteboard. Here he talks with Nicole Rafidi, a rising senior. (Photo by Frank Wojciechowski)

The research is led by Paul Prucnal, a Princeton professor of electrical engineering, and David Rosenbluth, a neuroscientist and principle engineer at Lockheed Martin's Advance Technology Laboratory, in Cherry Hill, N.J. It is funded by Lockheed Martin and Princeton's Stuart M. Essig '83 and Erin S. Enright '82 Fund for Innovation in Engineering and Neuroscience.

The project, which started in 2008, seeks to overcome the inherent speed constraints of electrical circuits, which are ultimately limited by the time it takes electricity to flow through wires. Instead of electrical wires, the team is using clear fiber-optic cables, through which information travels at nearly the speed of light. The "photonic" half of the project's name derives from photons, which are the fundamental unit of light, just as electrons are the fundamental unit of electricity. In conventional fiber-optic communications, photons speed information along great distances but are converted back to electrons once they reach a destination and the information needs to be processed. In Prucnal's lab, the processing occurs while the information is still encoded in light.

In addition to harnessing the ultimate speediness of light, the researchers are borrowing computational concepts used by the neural circuits that help humans and other organisms make ultrafast decisions.

Each neuron, whether in the brain or peripheral circuits of the nervous system, is connected to other neurons, which communicate through electrochemical pulses known as action potentials, or, colloquially, as "spikes." Based on the pattern of incoming spikes, a neuron decides whether to send out its own signal to convey information to the rest of the network. This function is the basis for neural computing.

The project uses fiber-optic devices that make ultrafast calculations with photons of light instead of the electrons used by electricity-based computers circuits. (Photo by Frank Wojciechowski)

The ability to make such decisions rapidly comes in handy in many situations. A gazelle being pursued by a cheetah, for instance, has to decide extremely quickly -- and correctly -- whether to dart left or right. A baseball player at bat has to decide to swing or not swing based on a number of cues that arrive a fraction of a second before the decision must be made.

The way that neural networks compute in do-or-die situations offers clues as to how computational devices based on light could function. "We are transposing learning, inhibition and other behaviors typical of neural processing onto fiber-optic circuits," Rosenbluth said. "But I don't think of it as trying to reproduce something in the brain. It's a hybrid between the analog computing done in the brain and the purely digital systems used by most computers."

When Prucnal and Rosenbluth first began talking about the possibility of studying blending fiber-optic signal processing and neuroscience, they noticed that although the mathematical equations used to model neural and fiber-optic networks used different variables, they were very similar in their overall formulation.

"We put the equations side-by-side and it was really an 'aha!' moment for us," Prucnal said. "It was pretty exciting that it might actually work."

In addition to Nahmias, undergraduates who have worked on the project include 2011 graduate Vinayak Venkataraman, rising seniors Will Herlands, Nicole Rafidi and Alex Tait, and rising juniors Abdulrahman Mahmoud and Dolly Xu, all electrical engineering students. Yue Tian, a graduate student in electrical engineering, is focusing on the project as part of his doctoral research.