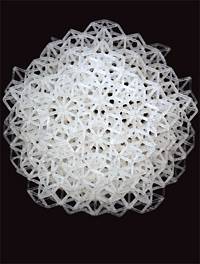 Princeton researchers tested whether quasicrystals -- an unusual form of solid -- would be useful for controlling the path of light by constructing a three-dimensional, softball-sized model of such a structure with 4,000 centimeter-long polymer rods.

A discovery by Princeton researchers may lead to an efficient method for controlling the transmission of light and improve new generations of communications technologies powered by light rather than electricity.

The discovery could be used to develop new structures that would work in the same fashion as an elbow joint in plumbing by enabling light to make sharp turns as it travels through photonic circuits. Fiber-optic cables currently used in computers, televisions and other devices can transport light rapidly and efficiently, but cannot bend at sharp angles. Information in the light pulses has to be converted back into cumbersome electrical signals before they can be sorted and redirected to their proper destinations.

In an experiment detailed in the Aug. 18 issue of Nature, the researchers constructed a three-dimensional model of a quasicrystal made from polymer rods to test whether such structures are useful for controlling the path of light. A quasicrystal is an unusual form of solid composed of two building blocks, or groups of atoms, that repeat regularly throughout the structure with two different spacings. Ordinary crystals are made from a single building block that repeats with all equal spacings. The difference enables quasicrystals to have more spherical symmetries that are impossible for crystals.

Ordinary crystals had been considered the best structure for making junctions in photonic circuits. But the researchers proved for the first time that quasicrystal structures are better for trapping and redirecting light because their structure is more nearly spherical. Their model, which had the same symmetry as a soccer ball, showed that the quasicrystal design could block light from escaping no matter which direction it traveled.

The finding represents an advance for the burgeoning field of photonics -- in which light replaces electricity as a means for transmitting and processing information -- and could lead to the development of faster telecommunications and computing devices.

"The search for a structure that blocks the passage of light in all directions has fascinated physicists and engineers for the past two decades," said Princeton physicist Paul Steinhardt, a co-author of the Nature paper, who invented the concept of quasicrystals with his student Dov Levine at the University of Pennsylvania in 1984.

"Controlled light can be directed, switched and processed like electrons in an electronic circuit, and such photonic devices have many applications in research and in communications," Steinhardt noted.

Co-author Paul Chaikin, a former Princeton professor now at the Center for Soft Matter Research at New York University, said, "Ultimately, photonics is a better method for channeling information than electronics -- it consumes less energy and it's faster."

The paper's other co-authors are Weining Man, who worked on the project as part of her doctoral thesis in Princeton's physics department, and Mischa Megens, a researcher at Philips Research Laboratories in the Netherlands.

To conduct their experiment, the researchers constructed the world's first model of a three-dimensional photonic quasicrystal, which was a little larger than a softball and made from 4,000 centimeter-long polymer rods. They observed how microwaves were blocked at certain angles in order to gauge how well the structure would control light passing through it.

Building the physical model was a breakthrough that proved more valuable than using complex mathematical calculations, which had been a hurdle in previous efforts to evaluate the effectiveness of photonic quasicrystals in blocking light.

"The pattern in which photons are blocked or not blocked had never really been computed," Steinhardt said. "In the laboratory, we were able to construct a device that was effectively like doing a computer simulation to see the patterns of transmission."

Chaikin added, "We showed that it has practical applications, and we also found out some properties of quasicrystals that we didn't know before."

The researchers are now exploring ways of miniaturizing the structure in order to utilize the device with visible light instead of microwaves. They also are examining whether the quasicrystal designs may be useful in electronic and acoustic applications.

Further details and images related to the study are available at: http://wwwphy.princeton.edu/~steinh/quasiphoton/