Atomic interactions in everyday solids and liquids are so complex that some of these materials’ properties continue to elude physicists’ understanding. Solving the problems mathematically is beyond the capabilities of modern computers, so scientists at Princeton University have turned to an unusual branch of geometry instead. 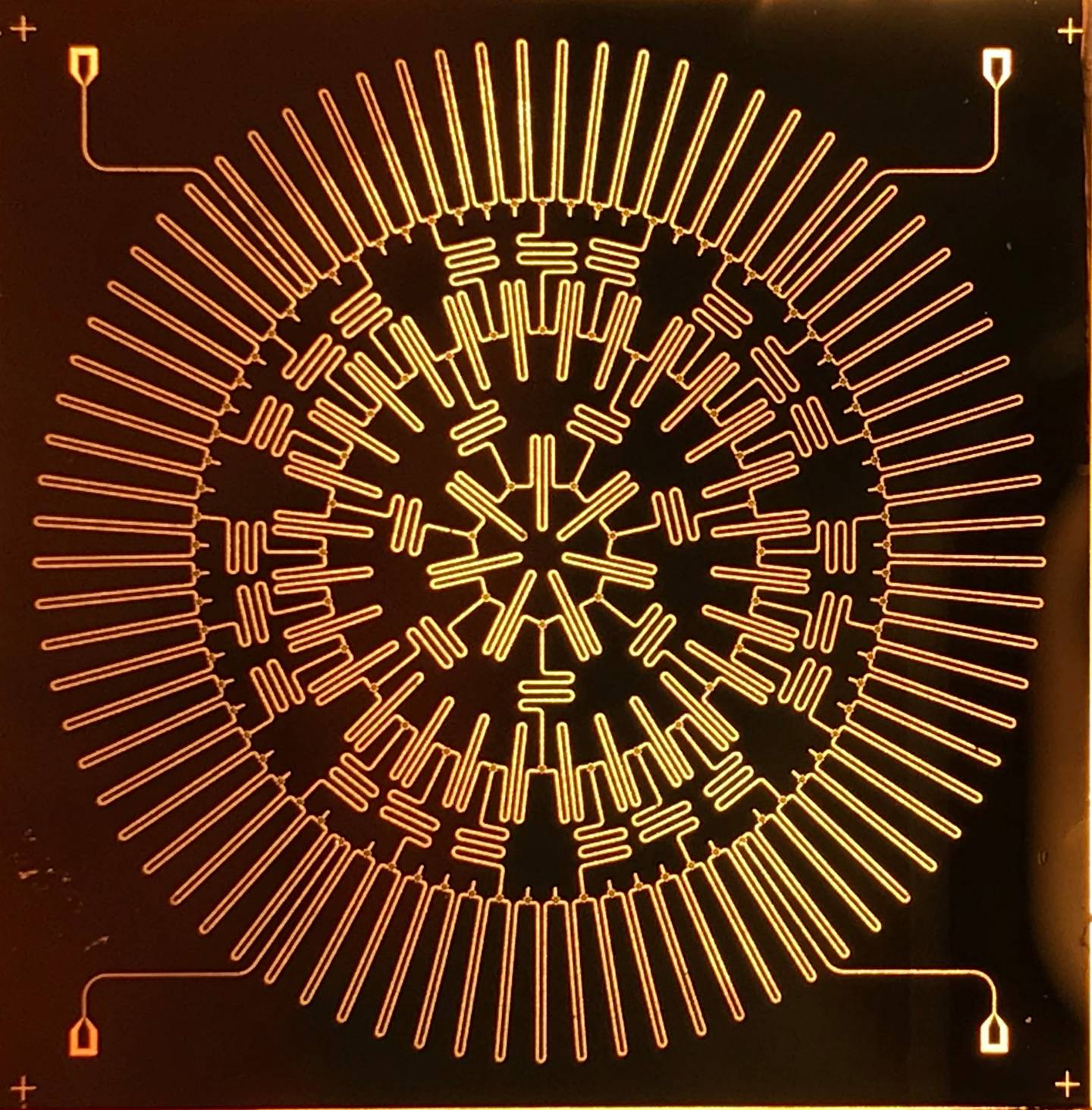 Princeton researchers have built an electronic array on a microchip that simulates particle interactions in a hyperbolic plane, a geometric surface in which space curves away from itself at every point.

Researchers led by Andrew Houck, a professor of electrical engineering, have built an electronic array on a microchip that simulates particle interactions in a hyperbolic plane, a geometric surface in which space curves away from itself at every point. A hyperbolic plane is difficult to envision — the artist M.C. Escher used hyperbolic geometry in many of his mind-bending pieces — but it is perfect for answering questions about particle interactions and other challenging mathematical questions.

The research team used superconducting circuits to create a lattice that functions as a hyperbolic space. When the researchers introduce photons into the lattice, they can answer a wide range of difficult questions by observing the photons’ interactions in the simulated hyperbolic space.

“You can throw particles together, turn on a very controlled amount of interaction between them, and see the complexity emerge,” said Houck, who was the senior author of the paper published July 4 in the journal Nature.

Alicia Kollár, a postdoctoral research associate at the Princeton Center for Complex Materials and the study’s lead author, said the goal is to allow researchers to address complex questions about quantum interactions, which govern the behavior of atomic and subatomic particles.

“The problem is that if you want to study a very complicated quantum mechanical material, then that computer modeling is very difficult. We’re trying to implement a model at the hardware level so that nature does the hard part of the computation for you,” she said.

The centimeter-sized chip is etched with a circuit of superconducting resonators that provide paths for microwave photons to move and interact. The resonators on the chip are arranged in a lattice pattern of heptagons, or seven-sided polygons. The structure exists on a flat plane, but simulates the unusual geometry of a hyperbolic plane.

“In normal 3-D space, a hyperbolic surface doesn’t exist,” said Houck. “This material allows us to start to think about mixing quantum mechanics and curved space in a lab setting.”

Trying to force a three-dimensional sphere onto a two-dimensional plane reveals that space on a spherical plane is smaller than on a flat plane. This is why the shapes of countries appear stretched out when drawn on a flat map of the spherical Earth. In contrast, a hyperbolic plane would need to be compressed in order to fit onto a flat plane.

“It’s a space that you can mathematically write down, but it’s very difficult to visualize because it’s too big to fit in our space,” explained Kollár.

To simulate the effect of compressing hyperbolic space onto a flat surface, the researchers used a special type of resonator called a coplanar waveguide resonator. When microwave photons pass through this resonator, they behave in the same way whether their path is straight or meandering. The meandering structure of the resonators offers flexibility to “squish and scrunch” the sides of the heptagons to create a flat tiling pattern, Kollár said. 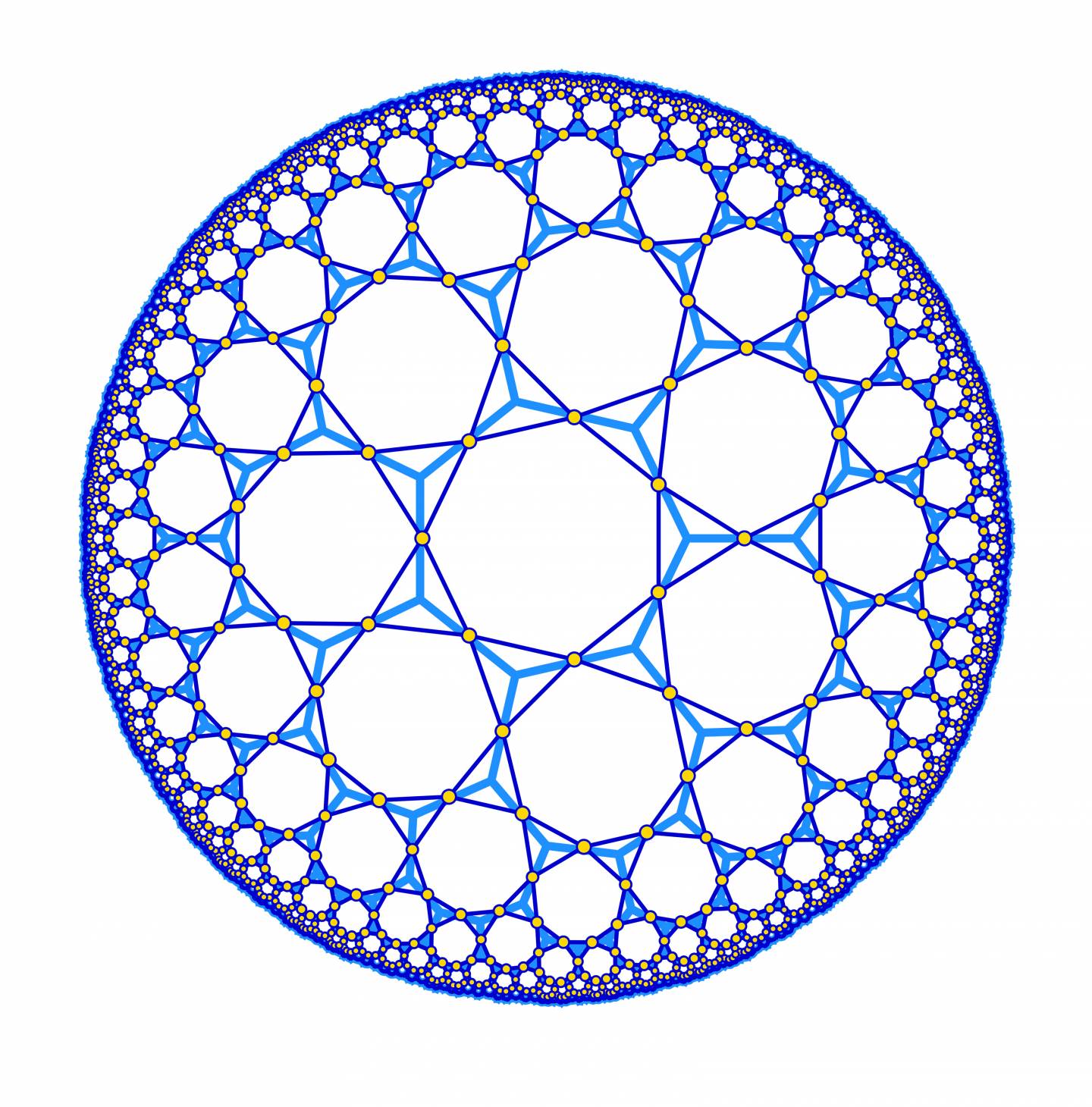 A schematic of the resonators on the microchip, which are arranged in a lattice pattern of heptagons, or seven-sided polygons. The structure exists on a flat plane, but simulates the unusual geometry of a hyperbolic plane.

Courtesy of the researchers

Looking at the chip’s central heptagon is akin to looking through a fisheye camera lens, in which objects at the edge of the field of view appear smaller than in the center: the heptagons look smaller the farther they are from the center. This arrangement allows microwave photons that move through the resonator circuit to behave like particles in a hyperbolic space.

The chip’s ability to simulate curved space could enable new investigations in quantum mechanics, including properties of energy and matter in the warped space-time around black holes. The material could also be useful for understanding complex webs of relationships in mathematical graph theory and communication networks. Kollár noted that this research could eventually aid the design of new materials.

But first, Kollár and her colleagues will need to further develop the photonic material, both by continuing to examine its mathematical basis and by introducing elements that enable photons in the circuit to interact.

“By themselves, microwave photons don’t interact with each other — they pass right through,” she said. Most applications of the material would require “doing something to make it so that they can tell there’s another photon there.”

Kollár plans to continue this line of research as she begins a faculty position at the University of Maryland this summer. Mattias Fitzpatrick, who received a Ph.D. in electrical engineering on June 4, co-authored the study along with Kollár and Houck. On Aug. 15, Fitzpatrick will begin a postdoctoral fellowship with Nathalie de Leon, an assistant professor of electrical engineering at Princeton.

"Hyperbolic lattices in circuit quantum electrodynamics," by Alicia J. Kollár, Mattias Fitzpatrick and Andrew A. Houck was published July 3 in the journal Nature, volume 571, pages 45–50 (DOI: 10.1038/s41586-019-1348-3). This research was supported by the National Science Foundation, the Princeton Center for Complex Materials (DMR-1420541) and the Multidisciplinary University Research Initiative (W911NF-15-1-0397).