Scientists looking to capture evidence of dark matter -- the invisible substance thought to constitute much of the universe -- may find a helpful tool in the recent work of researchers from Princeton University and New York University.

The team unveiled in a report in the journal Physical Review Letters this month a ready-made method for detecting the collision of stars with an elusive type of black hole that is on the short list of objects believed to make up dark matter. Such a discovery could serve as observable proof of dark matter and provide a much deeper understanding of the universe's inner workings.

Postdoctoral researchers Shravan Hanasoge of Princeton's Department of Geosciences and Michael Kesden of NYU's Center for Cosmology and Particle Physics simulated the visible result of a primordial black hole passing through a star. Theoretical remnants of the Big Bang, primordial black holes possess the properties of dark matter and are one of various cosmic objects thought to be the source of the mysterious substance, but they have yet to be observed.

If primordial black holes are the source of dark matter, the sheer number of stars in the Milky Way galaxy -- roughly 100 billion -- makes an encounter inevitable, the authors report. Unlike larger black holes, a primordial black hole would not "swallow" the star, but cause noticeable vibrations on the star's surface as it passes through.

Thus, as the number of telescopes and satellites probing distant stars in the Milky Way increases, so do the chances to observe a primordial black hole as it slides harmlessly through one of the galaxy's billions of stars, Hanasoge said. The computer model developed by Hanasoge and Kesden can be used with these current solar-observation techniques to offer a more precise method for detecting primordial black holes than existing tools.

"If astronomers were just looking at the sun, the chances of observing a primordial black hole are not likely, but people are now looking at thousands of stars," Hanasoge said.

"There's a larger question of what constitutes dark matter, and if a primordial black hole were found it would fit all the parameters -- they have mass and force so they directly influence other objects in the universe, and they don't interact with light. Identifying one would have profound implications for our understanding of the early universe and dark matter." 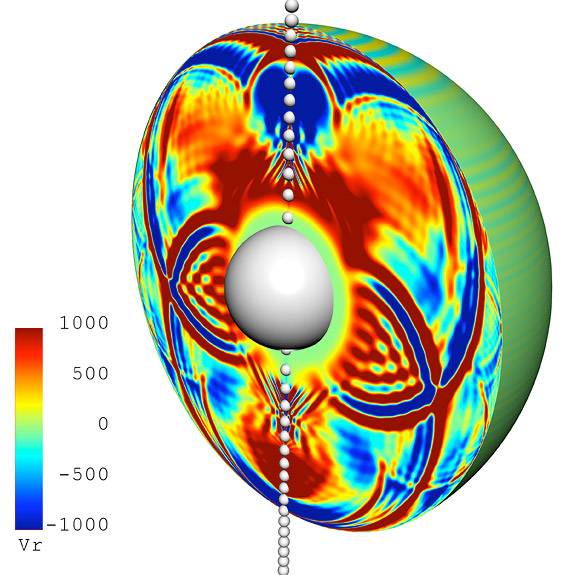 Although dark matter has not been observed directly, galaxies are thought to reside in extended dark-matter halos based on documented gravitational effects of these halos on galaxies' visible stars and gas. Like other proposed dark-matter candidates, primordial black holes are difficult to detect because they neither emit nor absorb light, stealthily traversing the universe with only subtle gravitational effects on nearby objects.

Because primordial black holes are heavier than other dark-matter candidates, however, their interaction with stars would be detectable by existing and future stellar observatories, Kesden said. When crossing paths with a star, a primordial black hole's gravity would squeeze the star, and then, once the black hole passed through, cause the star's surface to ripple as it snaps back into place.

Eyeing the sun's surface for hints of dark matter

Video simulations of the researchers' calculations were created by NASA's Tim Sandstrom using the Pleiades supercomputer at the agency's Ames Research Center in California. One clip shows the vibrations of the sun's surface as a primordial black hole -- represented by a white trail -- passes through its interior. A second movie portrays the result of a black hole grazing the Sun's surface.

Marc Kamionkowski, a professor of physics and astronomy at Johns Hopkins University, said that the work serves as a toolkit for detecting primordial black holes, as Hanasoge and Kesden have provided a thorough and accurate method that takes advantage of existing solar observations. A theoretical physicist well known for his work with large-scale structures and the universe's early history, Kamionkowski had no role in the project, but is familiar with it.

"It's been known that as a primordial black hole went by a star, it would have an effect, but this is the first time we have calculations that are numerically precise," Kamionkowski said.

"This is a clever idea that takes advantage of observations and measurements already made by solar physics. It's like someone calling you to say there might be a million dollars under your front doormat. If it turns out to not be true, it cost you nothing to look. In this case, there might be dark matter in the data sets astronomers already have, so why not look?"

One significant aspect of Kesden and Hanasoge's technique, Kamionkowski said, is that it narrows a significant gap in the mass that can be detected by existing methods of trolling for primordial black holes .

The search for primordial black holes has thus far been limited to masses too small to include a black hole, or so large that "those black holes would have disrupted galaxies in heinous ways we would have noticed," Kamionkowski said. "Primordial black holes have been somewhat neglected and I think that's because there has not been a single, well-motivated idea of how to find them within the range in which they could likely exist."

The current mass range in which primordial black holes could be observed was set based on previous direct observations of Hawking radiation -- the emissions from black holes as they evaporate into gamma rays -- as well as of the bending of light around large stellar objects, Kesden said. The difference in mass between those phenomena, however, is enormous, even in astronomical terms. Hawking radiation can only be observed if the evaporating black hole's mass is less than 100 quadrillion grams. On the other end, an object must be larger than 100 septillion (24 zeroes) grams for light to visibly bend around it. The search for primordial black holes covered a swath of mass that spans a factor of 1 billion, Kesden explained -- similar to searching for an unknown object with a weight somewhere between that of a penny and a mining dump truck.

He and Hanasoge suggest a technique to give that range a much-needed trim and established more specific parameters for spotting a primordial black hole. The pair found through their simulations that a primordial black hole larger than 1 sextillion (21 zeroes) grams -- roughly the mass of an asteroid -- would produce a noticeable effect on a star's surface.

"Now that we know primordial black holes can produce detectable vibrations in stars, we could try to look at a larger sample of stars than just our own sun," Kesden said.

"The Milky Way has 100 billion stars, so about 10,000 detectable events should be happening every year in our galaxy if we just knew where to look."

This research was funded by grants from NASA and by the James Arthur Postdoctoral Fellowship at New York University.