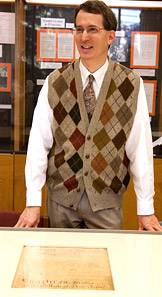 University Archivist Daniel Linke delves into the archives to reveal the oldest existing copy of Princeton's charter. The video "Princeton at 265" focuses on Charter Day, the anniversary of the document's signing on Oct. 22, 1746, which is celebrated as the University's birthday.

This year marks the 265th anniversary of the signing of Princeton University's charter, which was granted on Oct. 22, 1746. Known as Charter Day, the date is celebrated as the University's birthday.

In an era known as "the Great Awakening," the seven founders and early leaders of what was then known as the College of New Jersey believed in challenging orthodoxy and being open to all sources of knowledge. "Princeton at 265," a video documenting celebrations of Charter Day, looks at how this spirit of dissent infuses and informs the University to this day.

In the video, University Archivist Daniel Linke provides a rare close-up glimpse of the oldest existing copy of Princeton's charter, carefully preserved in the University Archives at the Seeley G. Mudd Manuscript Library. The video also includes archival footage from the 200th anniversary convocation in 1946 and the 250th anniversary convocation in 1996. Highlights from the 1996 convocation include a moving keynote speech by Toni Morrison, the 1993 winner of the Nobel Prize in Literature, and the Robert F. Goheen Professor in the Council of the Humanities Emeritus.