Discussing a professional evolution that began at Disneyland and was influenced by Descartes, Lewis Carroll, E.E. Cummings and Lenny Bruce, author and actor Steve Martin spoke about his creative process, his meteoric rise and his abrupt retirement from stand-up comedy Dec. 8 as part of the Princeton University Public Lectures Series.

Martin gave the Spencer Trask Lecture before a packed crowd of nearly 500 in Room 50 of McCosh Hall. He was introduced by Joyce Carol Oates, Princeton's Roger S. Berlind '52 Professor of the Humanities and professor of creative writing in the Lewis Center for the Arts.

"He is certainly the first person at Princeton, either faculty or visiting lecturer, among whose major works is a volume titled 'Pure Drivel,'" she said. "Though numerous books may merit this title, only Steve Martin had the integrity to acknowledge it."

Martin, who worked in a magic shop at Disneyland as a teenager, always knew he wanted to be an entertainer. 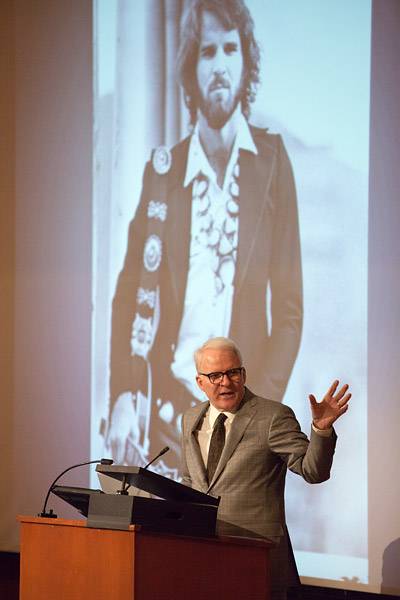 Steve Martin discusses the evolution of his stand-up comedy career in a lecture at Princeton University, backed by a photo of himself from the earlier — and scruffier — days of his career. Martin's talk addressed his creative process and his wide range of influences, from philosophers to fellow comedians. (Photo by John Jameson)

"In spite of a lack of natural ability, I did have the one element necessary to all early creativity: Naivete — that fabulous quality that keeps you from knowing how unsuited you are for what you are about to do," he said.

He worked on developing his career as an entertainer during his undergraduate years in the 1960s at Long Beach State College, where he majored in philosophy.

"People kept telling me it's a useless major, but it changed my life," he said. "Descartes said, 'I think, therefore I am,' in an attempt to start an investigation of philosophy from scratch, and I thought, 'Why not do that with comedy?'"

For Martin, the traditional comedian's template — setup, punch line, laugh — was not appealing. He vowed to write everything in his act, scrapping much of his early material that was derived from joke books and timeworn gags.

"They struck me as funny in a new way," Martin said. "I thought about this, and I thought, 'Where does that laugh come from?' and the comedy doors opened wide for me."

This absurdist point of view, fueled by the poet Cummings's belief that language was like motion, took Martin to new and unexpected places in comedy. Suddenly, reading the periodic table of elements was funny. As he told his then-girlfriend, he went "avant-garde."

"There is no harm in charging one's self up with delusions between moments of valid inspiration," he said.

This inspiration was to disallow the traditional comic form. If the audience's laughter was formed by a building of tension leading to an expected release, Martin wanted to change the paradigm.

"What about the comedy that you experience with friends? There's no setup, there's no punch line, and you often can't explain what it is that made you laugh," he said. "You had to be there.

"What if there were no punch lines? What if I created tension and never released it? What would the audience do with all that tension?"

If there was no punch line, Martin theorized, the audience would pick its own place to laugh. It was a rule that guided his act from then on.

Martin's talk spanned his rise through the ranks of stand-up comedians, from working the opening act in obscure clubs to going on the road to hitting the big time with sold-out stadium shows and appearances on "The Tonight Show" and "Saturday Night Live." He discussed the inspiration of cutting-edge comedians such as Lenny Bruce and the Smothers Brothers. He showed photos of himself as a teenager and through his career as he told of the genesis of some of his biggest and most successful moments.

The talk also included a few props, with which he performed one of his first comedy skits, "The Napkin Trick," simply sticking his tongue through a napkin with an exaggerated flourish.

Martin revives one of his early comedy bits, "The Napkin Trick," for the Princeton audience with his trademark flourish. (Photo by John Jameson)

Martin told of the first time he used the now-iconic line "Excuuuuuse Me," how he became a "Wild and Crazy Guy," and how he created his famous faux drug-use skit, "Getting Small." He also explained how the physical part of his comedy became just as important as the words he spoke.

"Sometimes it wasn't the line or the joke that got the laugh, but it was the tip of my finger," he said. "I discovered I could get laughs with silence. I would stand and stare at the audience with mock disdain, and on a good night it would strike us all as funny."

The experiment Martin began years earlier with Descartes and Carroll led to an abrupt end. After refining his comedy and earning the adulation of millions, he said he had a startling realization.

"I was like a conductor," he said. "The choreography was in place, and all I had to do was fulfill it. I was performing a litany of immediate old favorites, and the laughs — rather than being the result of spontaneous combustion — now seemed to roll in like waves.

"I still loved the nuance of stand-up, but nuance was difficult when you're a dot in a basketball arena."

He recounted a show in 1981 in which there were technical issues during his performance of the song "King Tut." He realized he was done with that part of his evolution.

"I had gone through a fully explored creative experience that had dead ended," he said. "I never did stand-up again."

And, much like his comedy, which did not provide obvious cues for those in attendance, Martin's talk was complete. 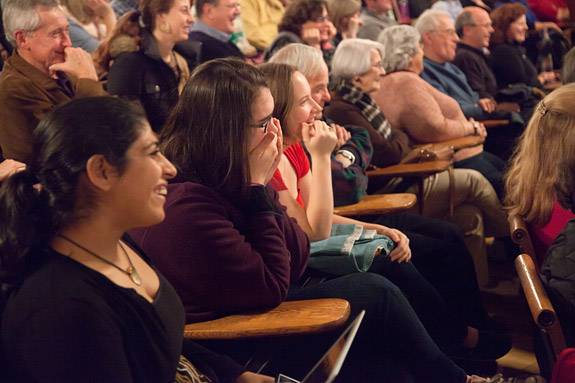 Audience members enjoy Martin's tales of his efforts to find and refine his comic voice. (Photo by John Jameson)