by Matilda Luk and Steven Schultz 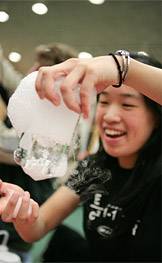 A new series of posters and an online gallery produced by the School of Engineering and Applied Science highlights independent student projects and extracurricular activities that link technology to many other disciplines and address pressing societal needs. Above, Stephanie Lee, one of the highlighted students and a graduate student in chemical and biological engineering, holds a handful of bubbles as part of an event aimed at sparking interest in science for middle school students. Interested in technology's role in improving lives in the developing world and sustainability, Lee researches organic semiconductors to make low-cost electronic devices and solar cells. Some of Lee's work in this area was featured in the academic journal Advanced Materials.

In an effort to communicate the breadth of achievements and interests of its students, Princeton University's School of Engineering and Applied Science has created a series of posters and an online gallery profiling more than 30 graduate and undergraduate students.

Through independent research projects ranging from water management strategies in Africa to the development of more effective medical treatments, Princeton engineering students tackle fundamental problems in their fields and tie together coursework from across the University. Their projects and extracurricular activities often involve international study, public service and entrepreneurship. 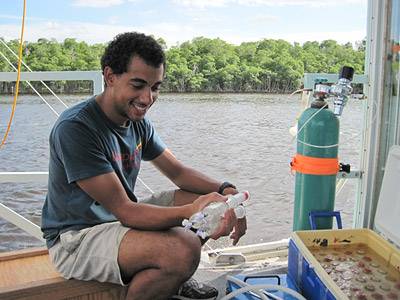 Matthew Reid, a graduate student in civil and environmental engineering, holds samples to analyze for his research in biogeochemistry, focusing on the relationship between wetland vegetation and soils, and volatile compounds and gases in the atmosphere. Once a Peace Corps volunteer in Tanzania, Reid also has interests in sustainability and international development. (Photo courtesy of Matthew Reid)

"Our students engage in fascinating collaborations because, ultimately, engineering is about putting science to use in the service of society," said H. Vincent Poor, dean of engineering. "The most urgent and most interesting questions often involve a mix of technological and human factors, so the opportunities to bring these perspectives together at Princeton are very exciting."

The posters are on view in the main hallway of Princeton's Engineering Quadrangle. To visit an online gallery of the profiles, visit the school's website. 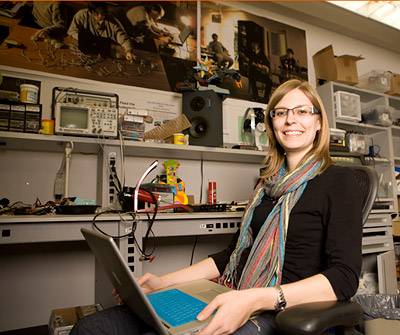 Rebecca Fiebrink distinguished herself as a graduate student studying the intersection of music and human-computer interaction. After receiving her Ph.D. this past spring, she was appointed immediately to the faculty as an assistant professor of computer science. (Photo by Brian Wilson) 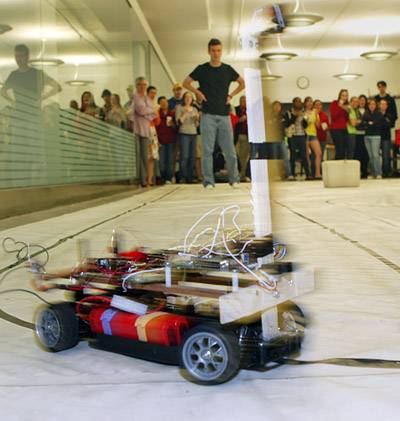 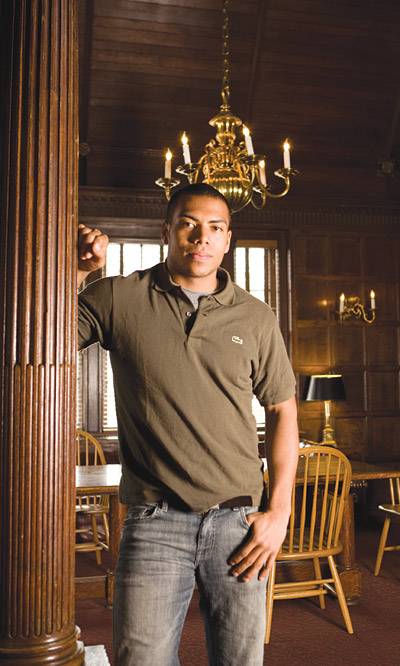 In addition to being captain of the varsity football team and spearheading efforts to raise awareness and funding for rare diseases, Jordan Culbreath — a 2011 graduate who majored in mechanical and aerospace engineering — also received academic honors such as the Enoch J. Durbin Prize for Engineering Innovation and the Donald Janssen Dike Award for Undergraduate Research. Together with Michael Schoder, a member of Princeton's Class of 2010, Culbreath developed a cold-water hydrotherapy spa system for varsity athletes that is more cost- and energy-efficient. (Photo by Brian Wilson) 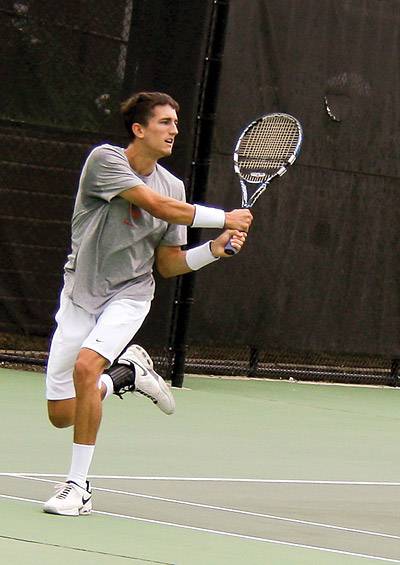 Alex Faust plays tennis, one of his extracurricular activities as a Princeton undergraduate. A 2011 graduate who majored in operations research and financial engineering, Faust served as captain of the University's varsity team. In his senior independent research, Faust worked on transportation systems analysis, studying methods for optimizing evacuations under large-scale disaster scenarios. (Photo courtesy of The Daily Princetonian)

Posters hanging in the main hallway of the Engineering Quadrangle, near the waiting area for visitors taking engineering school tours, highlight the diverse and interdisciplinary projects of students in each of the school's departments. (Photo by Denise Applewhite)