Class: "Economic Patriotism? The Politics of Dealing With Chinese Takeovers"

Instructor: Sophie Meunier, a lecturer and research scholar in the Woodrow Wilson School of Public and International Affairs. Meunier's current research focuses on anti-Americanism and anti-Chinese sentiment. A native of France and co-director of the European Union Program at Princeton, Meunier has also written extensively about international trade, Europe and globalization, and French politics. In 2011, she was awarded the medal of Chevalier dans l'Ordre des Palmes Académiques by the French government for her efforts in promoting French language and culture in the United States.

Description: The course examines the growing level of Chinese investment in the United States and the policy issues that it raises. The class is also a junior task force, a distinctive element of the Wilson School in which a small group of juniors conduct research to shed light on a policy question. The students collectively produce a report with policy recommendations (.pdf); each student also writes a research paper as part of the Wilson School's independent work requirement for its majors and certificate students.

In this course, seven students are considering how the U.S. government should deal with the national security issues, economic concerns and potential political backlash of Chinese investment in the United States, and how welcoming it ought to be. Meunier said she geared the class toward the production of a report that culminates with a presentation to policymakers, encouraging the students to engage deeply with the material and to work collaboratively to finalize the recommendations and write the report. Many elements of the class — guest speakers who have extensive experience with foreign investment in the United States; changes to the reading list based on current events; a trip to Washington, D.C., to present the students' findings; and working as a group — are aimed at giving students "a taste of what professional life is all about" and "producing sound research under real-life constraints," Meunier said.

The class "Economic Patriotism? The Politics of Dealing With Chinese Takeovers" allows undergraduates in the Woodrow Wilson School of Public and International Affairs to take an in-depth look at the growing Chinese investment in the United States and formulate policy recommendations as a task force. (Photo by Nick Barberio)

Inspiration: This is the first time Meunier is teaching this topic, though she has taught task forces in the past. In 2005 and 2006, two cases of foreign investment in the United States faced intense political opposition — the China National Offshore Oil Corporation Ltd.'s bid to buy California-based Unocal Corp, and Dubai Ports World's bid to manage operations at some major American ports, respectively. Couple those examples with the fact that China is the largest holder of U.S. debt and the perception that China is the world's leading economic power, based on the Pew Global Attitudes Project, Meunier said, and there's potential for more resistance as Chinese investment continues to grow. Since 2007, Chinese investment in the United States has grown by 400 percent, though it's still a small portion — about .2 percent — of foreign investment, Meunier said.

"A politician will seize that issue and it is going to become a media circus," Meunier said. "How should the U.S. administration respond to such backlash? I thought this is an interesting, promising policy question to explore and one that I'm very convinced will have some resonance in the future."

Class trip: On Dec. 9, Meunier and the students traveled to Washington, D.C., to present their eight recommendations, in which they stated that the U.S. government should welcome more Chinese direct investment through a variety of measures outlined in their report, provided that national security is safeguarded. Armed with a 24-page document and 12-minute PowerPoint presentation, they gave briefings at the following five stops: the Committee on Foreign Investment in the United States at the Treasury Department; the office of Sen. Bob Menendez of New Jersey; the Department of Commerce; the U.S.-China Working Group in the House of Representatives; and a think tank, the Peterson Institute for International Economics. 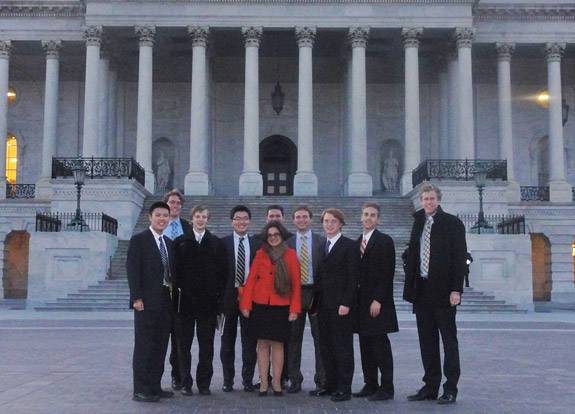 Sophie Meunier and her students say their meetings in Washington, D.C., including one on Capitol Hill, provided insight into the workings of government. (Photo courtesy of Sophie Meunier)

Students say: Derek Wu said the course has kept pace with the rapid economic development he has seen during his frequent trips to China. "The ever-changing nature of our task force's topic compelled us to frequently accommodate and adjust to new findings and remain open to the comments and views of others," Wu said. "These are skills that I think are especially important for public policy research (as well as the workforce!), and I'm grateful that our task force gave us a chance to practice and utilize them."

Andrew Sartorius called the trip to Washington, D.C., "one of the highlights of my Princeton undergraduate experience." He was thrilled with the level of engagement of the officials the students met, as well as the potential of their work to make a difference in American policy. "I'm still wrapping my head around that today — I would never have thought that my work would be taken seriously by the U.S. government as an undergraduate."

Thomas Tasche also focused on the trip to Capitol Hill. "The most enjoyable part of the experience was the opportunity to engage with our interlocutors — often the policymakers responsible for realizing the suggestions we were making — and hear their honest feedback," Tasche said. "We approached the project as professionals, and it was rewarding to be received as such, without condescension. Going head-to-head with Washington policymakers in defense of our recommendations was a valuable exercise." Added Tasche, "It's one thing to write about policy; it's another thing to put it into practice. As an aspiring public servant, it has been an invaluable opportunity to refine my knowledge of the policymaking process and expand my understanding of the federal government."