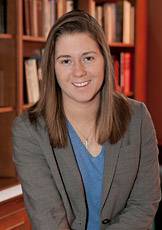 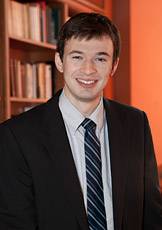 Elvin, who is a sociology major from Boston, is the recipient of various academic distinctions, including the Shapiro Prize for Academic Excellence. She is a member of the varsity women's ice hockey team and volunteers with several religious and youth organizations, with much of her time focused on helping children with disabilities.

"She shows all the best of the Princeton 'character traditions' — high endeavor, openness and capacity for sheer hard work and self discipline," said Elvin's junior paper adviser Paul Willis, a lecturer with the rank of professor in sociology. "There are many who share Ann-Marie's raw talent but few that apply their undoubted talent to such good purpose."

Elvin said she feels "incredibly blessed" to be selected as a co-recipient of this year's Pyne Prize.

"The honor is, in equal parts, exciting, overwhelming and deeply humbling, as it is a far greater testament to those I have worked alongside than to any accomplishments I have enjoyed," she said.

During her time at Princeton, Elvin has pursued studies focused on the criminal justice system. After graduation, she intends to enroll in a master's program in criminology at the University of Cambridge in England and then return to the United States for law school.

Elvin's senior thesis investigates the role of art programs in prisons as a means of reconstructing individual identities and how they thereby promote reductions in recidivism. Elvin said her work is at the "nexus of law, crime and society." Her interest in the topic was piqued through participation in the Community-Based Learning Initiative project "Inside Out," which produced a magazine documenting students' experiences corresponding with inmates at a state prison in New Jersey.

"Ann-Marie is not just an accomplished student who strives for excellence in every project she undertakes but also an individual of great strength and generosity," said her thesis adviser Patricia Fernandez-Kelly, a senior lecturer in sociology.

Fernandez-Kelly said Elvin's resolve to become an active force in prison reform exemplifies her compassion and dedication to service.

"Looking out for the interests of prisoners is less than a popular cause in our country — prisoners are not a sympathetic population. Yet Ann-Marie stands on the side of principle and equity, even when that represents a personal risk," she said. "She hopes to be a judge someday. I believe she has all the attributes necessary to become a notable public figure."

During the past two summers, Elvin interned at the Suffolk County District Attorney's Office in Boston, where she assisted prosecutors with legal research and trial preparation.

Outside of class, Elvin is an accomplished ice hockey player. Although injuries forced her to retire after her junior year, Elvin remains an "integral part" of the women's team by helping organize and break down game videos, said head coach Jeffrey Kampersal.

"Helping others comes naturally to Ann-Marie, and is as much as part of her identity as is being an exceptional student and athlete," Kampersal said. "She is the moral compass of our team and her work with the community has influenced her teammates to give time to worthy causes."

Elvin is a member of the student group Princeton Disabilities Awareness and the Princeton Aquinas Institute, the University's Catholic chaplaincy. She also is a peer academic adviser in Forbes College and has served as security chair for Tower Club. Outside of campus, she volunteers with the Princeton Youth Hockey Association, serves as a skating instructor for Special Olympics International and is a religious educator at St. Paul's Parish of Princeton.

"As I look back on the past four years, it is not any single activity but the total Princeton experience that I will most fondly remember," Elvin said. "I've never felt like I had to choose between my activities, which is what allowed me to enjoy each so much. I'm extremely fortunate to have found a second family during my time at Princeton."

Valcourt, who is from Sterling, Mass., is a molecular biology major and a candidate for a certificate in quantitative and computational biology. He received the Shapiro Prize for Academic Excellence in 2009 and is described by academic and administrative advisers as both a "gifted scientist" and "campus humorist."

"People simply love Jim," said Associate Dean of Undergraduate Students Thomas Dunne. "He is all that you would want an undergraduate to be — funny, passionate, and quietly determined and curious about the world around him."

Valcourt currently serves as chair of The Princeton Tiger humor magazine, speakers chair for the Student Bioethics Forum and as a leader trainer for the Outdoor Action preorientation program for freshmen. His other activities include working as an Orange Key campus tour guide and serving as a peer tutor and peer academic adviser in Wilson College.

"I'm incredibly excited and deeply honored to be selected as one of this year's winners," Valcourt said. "I'm especially honored because I've seen firsthand how many amazing people are in our class. I can't imagine trying to select a winner from such a talented pool of students."

Valcourt's junior and senior independent work has focused on molecular and systems biology and he plans to also pursue these fields in his graduate studies.

For his senior thesis, Valcourt is defining the extent of cooperation between two pathways that regulate protein levels, employing both biological and computational methods to conduct his studies.

Speaking of the larger scientific impacts of such research, Valcourt noted that each of these pathways, when disrupted, can contribute to developmental disorders and diseases, including cancer. He said this has driven his desire to understand how they interact.

His thesis adviser Hilary Coller, an assistant professor of molecular biology, called Valcourt a scientist and student "of the highest caliber."

"Jim has a remarkable grasp of both experimental research and the quantitative analysis of large-scale datasets and genomic information," Coller said of his work with her lab group. "He is mature, respectful and honest. He is supportive of others, kind and a good labmate."

Coller said she was so impressed with Valcourt's work that she invited him to co-write a scientific review expected for publication in the journal Cell Cycle. Valcourt's research experience also has included summers as an intern at the University of Massachusetts Medical School and the European Molecular Biology Laboratories in Heidelberg, Germany.

Valcourt credited the University's Integrated Science Curriculum for freshmen and sophomores — which combines instruction in physics, biology, chemistry and computer science — with giving him a strong foundation to become a scientist.

"The courses have totally changed the way I think about scientific problems, and some of my best friends have come from the bonds that the program forms," he said.

David Botstein, the Anthony B. Evnin '62 Professor of Genomics, said he observed Valcourt as "both very bright and highly motivated" when he taught him in several courses.

"He also has a talent for research (both at the bench and the computer) and extraordinary leadership skills," said Botstein, a professor of molecular biology and director of the Lewis-Sigler Institute for Integrative Genomics.

Among his peers, Valcourt has been recognized for his sense of humor and school spirit. In 2011, he launched the first National Intercollegiate Humor Conference at Princeton, which drew attendees from universities around the country. His work resulted in receiving the Alberto Santos-Dumont Prize for Innovation, which honors students who create a unique and creative program that has a wide-ranging impact on the undergraduate community.

"Princeton is such a special place," Valcourt said. "It has incredible students, amazing professors and fantastic resources. I've enjoyed every second here, and I can't imagine going anywhere else."